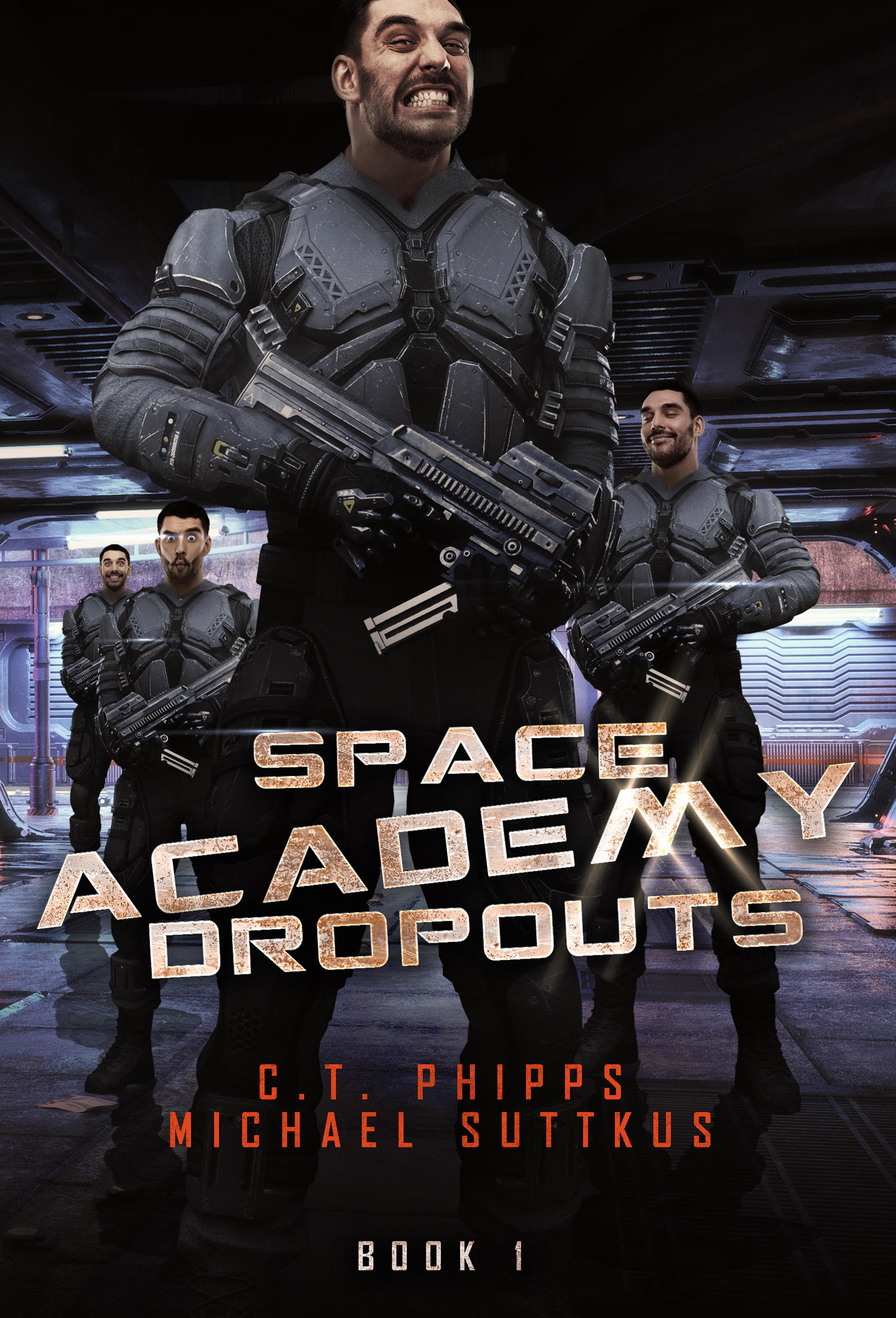 What is Space academy Dropouts About?

The newly renamed Vance Turbo has sabotaged his own career at Space Fleet Academy due to a desire to atone for training accident. Unfortunately, his actions result in him getting press-ganged into an expendable crew of misfits recruited by a legendary starship captain. Their mission? To recover a collection of lost sun-destroying missiles that could restart a galactic war. Unfortunately, Vance is smart enough to know something is wrong with this picture. After all, no sane person would recruit this crew to save the universe.

SPACE ACADEMY DROPOUTS is an all-new series from the hilarious duo of C.T. Phipps (Supervillainy Saga, Agent G) and Michael Suttkus (I Was a Teenage Weredeer, Lucifer’s Star) that lampoons the space opera as well as military science fiction genres.

Any time I get a chance to review a new book by C.T. Phipps and Michael Suttkus, I’m more than happy to jump on it. I’ve read all their other books, and have come to expect some seriously funny characters, fast paced plots and pop culture nods throughout. Space Academy Dropouts has all the things I’ve come to expect and more besides. They have even managed to tie it into their various other series in interesting ways, adding more flavor to their comedic multiverse.

The world building is what I’ve come to expect from these authors. Using a mix of futuristic sci-fi with nods to current time, it’s a world of space ships, wormholes and cyborgs, mixing in microwave popcorn and Star Trek references. This is tied most closely to the author’s Agent G and Lucifer’s Star universes, set in between the two timelines. The world is going through the initial changes in the decades after first contact with The Community, the broader galactic civilization of aliens. We get a good look at the early version of some settings in Lucifer’s Star, and even meet an ancestor of one of the main characters from that series. We also get a sneak peek at how that timeline’s conflicts originated, in some really surprising ways. It’s a very effective tie-in to the timelines I mentioned.

The characters are the usual eclectic bunch of misfits you’d expect from these authors. the main protagonist, Vance Turbo, bears a striking resemblance to a certain young starship captain named James T. Kirk, although he’s nowhere near as dedicated and responsible. In fact, he’s what would happen if you mixed Kirk with Han Solo, with some typically hilarious results. He is actually very competent, but certainly doesn’t want to live up or down to various family legacies.

Vance’s crew is also hilarious, as you would expect. Whether it be an ex girlfriend who happens to be a spy, a cyborg mercenary or an AI in a biological android body, they all get some really interesting arcs to flesh their characters out. You never feel like they’re just in the book to move the plot along, but are integral to the story. The villains are fairly standard for their books, having a mix of motivations based on their culture and outlook. They all tend toward the fascistic end of motivations, which to me seems a little repetitive and is perhaps the only weakness of the book, but it’s a minor weakness, and certainly not enough to put anyone off reading the book.

The audiobook version is narrated by the talented Jeffrey Kafer. This isn’t surprising, since he narrates most of the author’s work. As always, he does a great job bringing the various characters to life, injecting the snark necessary to make the author’s vision a reality. You are never in doubt about which character is speaking, and you can’t help but become engrossed in the story. His narrative pacing is some of the best in the business, and he could make reading the phone book interesting. This is a version you should definitely consider.

If you have any interest in comedic sci fi- this is definitely a book you can get into. It’s not required to read any of their other books to understand this one, since it is separated enough in time from any of their other series to be its own timeline. It should make you more interested in checking out those other series to see how past and future events played out, though, and I think will create even more fans for those series. I heartily recommend this book, and am excited to read the next installment in the coming months.

More About by C.T. Phipps