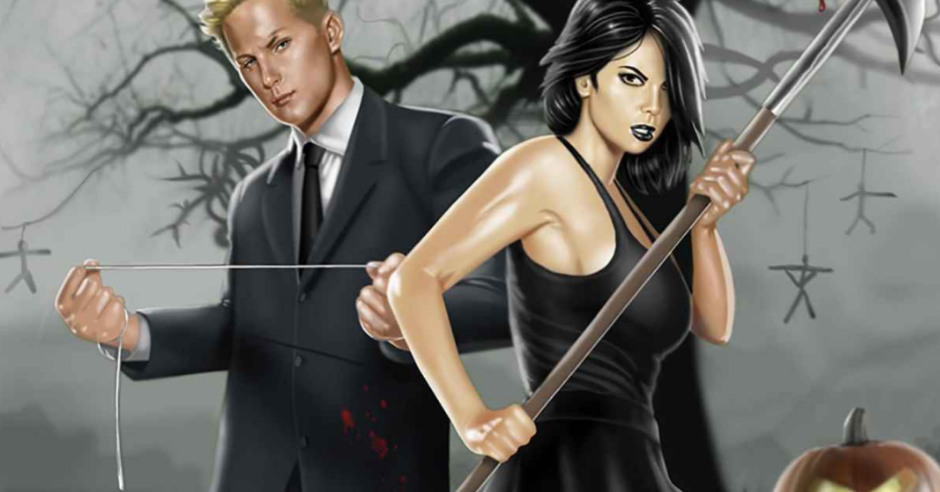 Psycho Killers can be good guys, no really!

The chair vinyl was frayed, the waitress looked surlier than a grizzly bear, and the patronage was a
mixture of truckers as well as meth-heads. It was the sort of place that if you said there was a psycho killer present, most people would just nod and say, “Yep, sounds about right.” Really, I should be offended.”―

FROM THE BEST-SELLING AUTHOR OF THE SUPERVILLAINY SAGA

What if all the villains of slasher movies were real? What if the movies made about them were just adaptations of real-life killers with supernatural powers? This is a fact known to William and Carrie because their father, Billy the Undying, was one of the worst slashers of all time. So much so that they’ve spent the past decade in an asylum out of fear they’d end up just like him. Escaping, the two have decided to form a new life on the road. Except, a chance encounter in a dingy diner introduces William to the girl of his dreams.

Too bad she’s a girl on a mission to kill all slashers. But maybe the best way to catch a supernatural serial killer is with another pair of them.

Enjoy this exciting prequel to the United States of Monsters books!

Have you heard of C.T. Phipps and Psycho Killers in Love? No? How about Straight out of Fangton and I was a Teenage Weredeer? If not, you are in for a treat because let me tell you about some very original and wild fiction by Phipps. And, when I say wild, the premise of Psycho Killers in Love is set in a world called The United States of Monsters.

I read this novel a couple of months ago and was tickled by it, but I had been holding off on writing a review because honestly, how do you write a review for a book titled Psycho Killers in Love and sum up everything? You should know a couple of things right off the start; Phipps appreciates puns and a bit on the nose kitsch. This greatly appeals to me as a reader. But, if that isn’t your style, don’t let that turn you off thinking that this will be a silly book; it isn’t. Quite the contrary, it is a straight-up horror novel with great characters that pay homage to psycho killer movies of the 1980s but has a fresh modern feel to it.

The story is about the main brother and sister protagonists, William and Carrie England. If you know your horror lore, we have a nod to Carrie from King’s Carrie and a nod to Robert England of Freddy Kreuger fame. Will and Carrie grew up in a slasher family, it is the family industry, and their father, Billy Jones Patrick, was a famous slasher who specialized in the 80s type slasher haunts. Killing in sororities, camps, and slumber parties is hard, but someone has to do it. After their father’s death, William and Carrie were put into an insane asylum to languish drugs and electroshock treatments. We start the story with the two of them being on the run from authorities after their escaping government lockdown.

Instead of being psychologically off your rocker and being a slasher, you have the slasher gene, and it is innate. It is embedded in your DNA as much as blue eyes and height. Monsters, while not wholly outed to the public, are real. Ghosts, demons, zombies all have a part to play in Phipps’s The United States of Monsters. And, of course, where you have zombies, and demons you have violence. The opening scene in a diner is worth buying the book to read.

With the embedded DNA, there are perks and pitfalls. They have supernatural abilities but also a thirst for blood, figuratively. However, I wouldn’t put a literal thirst for blood past Carrie, who reminded me quite a bit of deranged Harley Quinn. Instead of being true psycho slashers, they exercise their slasher gene with vigilante-type killing.

Another main character, and important one, is that of the Artemis Nancy. We meet her a bit into the story, and she is the counterpart and love interest to the psycho killer, William. An Artemis is a person with the genetic makeup to kill the slasher gene. And, since we are talking homages here, Nancy (Nancy, the last girl from Freddy Kreuger movies) is an extension of the last girl idea. Slasher movies usually had one girl left after the killing who would defeat the psycho killer. She was typically virginal, kind, and mild until pushed too far. Nancy is none of those things.

The three of them come together for some Scooby-Doo type fun, involving some Cthulu style psychological horror as well as monster baddies. It is great fun with exciting action and memorable characters.

There is a lot to unpack with this story, and much of it would spoil the fun. But if you enjoy excellent writing and things with the 80s horror vibe to them, you will like this. Come for the title, but stay for the characters and world-building.