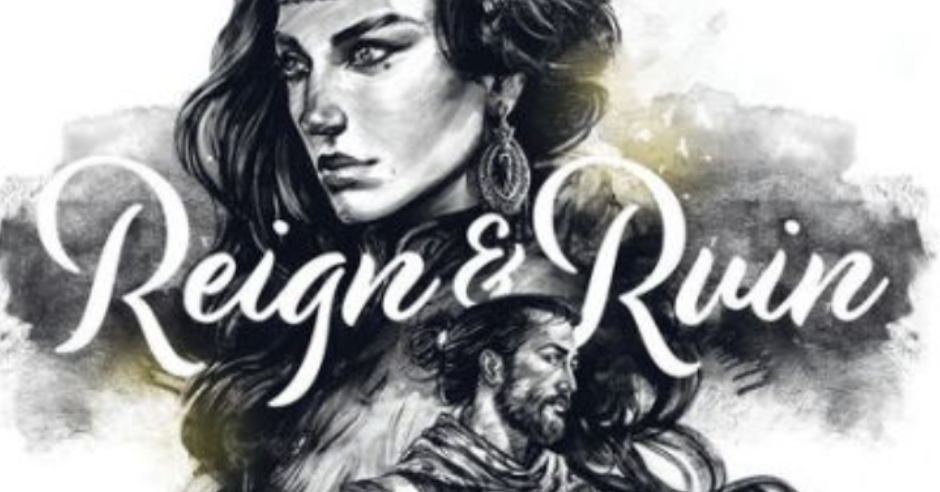 After a long succession of reading quite incredible yet quite dark and more nihilistic fantasy books, some palate-cleansers were probably a good idea. Nothing can reset my reading orientation quite like good fantasy-romance, and why not pick up an award-winning one for good measure?

Thus, for my first read of #SPFBOwinners July 2022 reads, where some of my TBR includes champions of Mark Lawrence’s Self-Published Fantasy Blog-Off (SPFBO), I selected the most recent winner of the coveted selfie-stick (the physical prize for winning SPBFO), at SPFBO Number 7, “Reign and Ruin” (Book One of Mages of the Wheel) by J.D. Evans.

Obviously, with this book being an SPFBO champion, expectations were high. No worries here: the book was wonderful.

The plot of “Reign and Ruin” revolves around the relationship between two fascinating and dynamic characters: Naime and Makram. Both are high-ranking royals and powerful mages, from different realms.

Naime is the heir by right to Tamar’s throne. However many of Tamar’s sexist nobles on the royal Council are not enthused about the prospect of a female ruler. As Naime’s father, the ruling Sultan, ails in the grips of dementia, the Sultan’s deteriorating health will force the succession issue, but Kadir, the influential Grand Vizier – a rival of Naime’s but a childhood friend of her father – and his supporters plans are to marry Naime off in a politically advantageous match.

The man Naime marries will be the ruler, not Naime, with the Grand Vizier as the real power behind the throne of Tamar. But Naime, while young, is very politically astute, judicious, confident, and born to lead and rule. What she lacks in experience in terms of diplomacy and court intrigue, she makes up in intelligence, determination, and gumption.

Makram is the Agassi, second-in-line to the throne of Sakrum. Kinus, the current sovereign, and Makram’s older brother, is suspicious, paranoid, and somewhat unpopular. There is a concerted faction of Sakrum’s elite who would like to supplant Makram in his brother’s place, but the loyal Makram will have none of it. He is unfailingly steadfast, and while very clever himself, his exposure is that he cannot envision his brother turning against him.

Not only is Makram an elite warrior, and commander of his brother’s armies, but he is also one of the world’s most powerful mages. He sees himself as the protector of his people, and this humble, unpretentious yet somewhat enigmatic leader is someone who inspires devotion from those who follow him.

With Tamar imperilled by an enemy’s imminent incursion to their borders, Naime sees a potential alliance for Tamar with Sakrum, which has a powerful military (this is also her father’s vision). The Grand Vizier and Council are largely opposed to such an alliance, for numerous reasons, including mistrust of foreigners. With her father’s erratic behaviour and failing memory, Naime takes the reins and decisively steers her nation towards broaching relations between the two realms.

While the Lord of Sakrum rejects the alliance as well, Makram sees this as a mistake, and ends up reluctantly going behind his brother’s back, and taking a few trusted subordinates including his right-hand man Tareck, and journeys secretly to Tamar, in hope of preserving the alliance. Representing Sakrum, he therefore deals directly with Naime, who represents her people in turn. An attraction begins to smoulder, but their opposing magic, court politicking, and the complexities of both their positions, any romance is likely doomed.

The characterization alone in this book made it worthy of a five-star read, since both the two primary love interests and the secondary characters were outstanding. In terms of the two main ones, Naime is a force to be reckoned with. The combination of exterior beauty and inner beauty, wit, intellect, fortitude, compassion, and passion dazzles and captivates Markham, and puts her opponents scrambling, on the defensive. She is still untutored in the ways of romance, and ultimately still green as well to a certain degree in the court intrigue department, but she’s a natural.

Naime adeptly handles the cunning and malicious Vizier and his cronies, copes bravely and lovingly with her father’s dementia, and courageously refuses to allow any naivety, her gender, or her society’s expectations of what a woman’s role should be stand in her way of what’s best for her realm. She is not going to cede power to anyone just because she’s female, and she is going to be the Sultana that Tamar needs, no matter what anyone thinks to the contrary.

Handsome, quietly heroic, and intense, Makram seems a bit more brooding and introspective at first, yet also daring and charismatic. He has some insecurities about the way he was raised, and being the spare heir (whom so many want to overthrow the rightful one) has not been an easy role for him. His blindness and obstinacy towards his brother’s major flaws as a ruler is in turn Makram’s main flaw. But his respect for women, his unwavering support of and faith in Naime, his sense of honour and duty, and his general decency will win the reader’s heart.

Makram knows Naime does not need saving. So he does not attempt to save her. He is not looking for her to be a subservient queen to him, should they wind up together. While he wants partnership, he is also quite willing, even encouraging, for her to be the nominal leader, with him in a supporting role. This progressive and open-minded approach, and his integrity, helps make him an extremely likeable character.

The supplementary players are phenomenal, and its apparent that Evans has set readers up for them to figure more prominently in future series. The banter and brotherhood between Makram and Tareck is humourous and heartwarming, and faithful Samira as Naime’s best friend and adviser is a standout.

The worldbuilding in this book was marvellous. It appears to be sculpted largely from ancient Middle Eastern customs and history, particularly the Ottoman Empire, and is luxuriant and realistic. The various nations have their own unique traditions and idiosyncrasies. The magic system is intriguing, with different types of mages, many of them tied to the elements – i.e. fire mages, water mages, earth mages, wielding in some cases enormous powers.

Despite looking for lighter fare with my current reads, I need compelling themes in a novel to make it truly engaging for me, and this book had them. Dealing with a parent with dementia, PTSD from battle, misogyny, gender issues, emotional vulnerability, trust, bigotry, and more are threaded through the narrative, and are all topics that are sensitively and well-handled by Evans. Balance is also a main theme in the book. Part of what Naime strives for is to right “The Wheel”, and help bring order to the state of magic.

The prose is gorgeous, and the Reign and Ruin is exquisitely written. This is the sort of engaging, lyrical, yet efficient prose one might expect from such a lauded book.

Now for the good stuff: the romance! Reign and Ruin has got that right amount of steam, slow-burn, building up from initial wariness and even irritation with one another (but still the beginnings of attraction) to something very intense. The writing of especially the foreplay scenes, will not only get your heart racing but also enchant you with the sheer beauty of Evan’s words. The author really knows how to use language to set the mood and combine the melding of the lover’s magic with the melding of their hearts.

“His magic answered hers with shadow for her light. Smoke beneath his skin, shadowed flames twining through and around the sharp, bright light of her power. They were a swirling, ever-changing harmony, his peace for her tempest, his restlessness for her calm, his recklessness for her planning, her independence for his loyalty. Night and day, dusk and dawn, the end, and the beginning.”

“Reign and Ruin” won an SPFBO Championship in the face of some incredibly stiff competition, and now having read it, I can see why many bloggers found it to be a deserving victor. It was an excellent book, and I am all in for continuing with the future installements in Evans’ “Mages of the Wheel” series to see what happens next with the kingdoms of Tamar and Sakrum.

#SPFBO8  Review and Cut  The Trials Of Ashmount by John Palladino