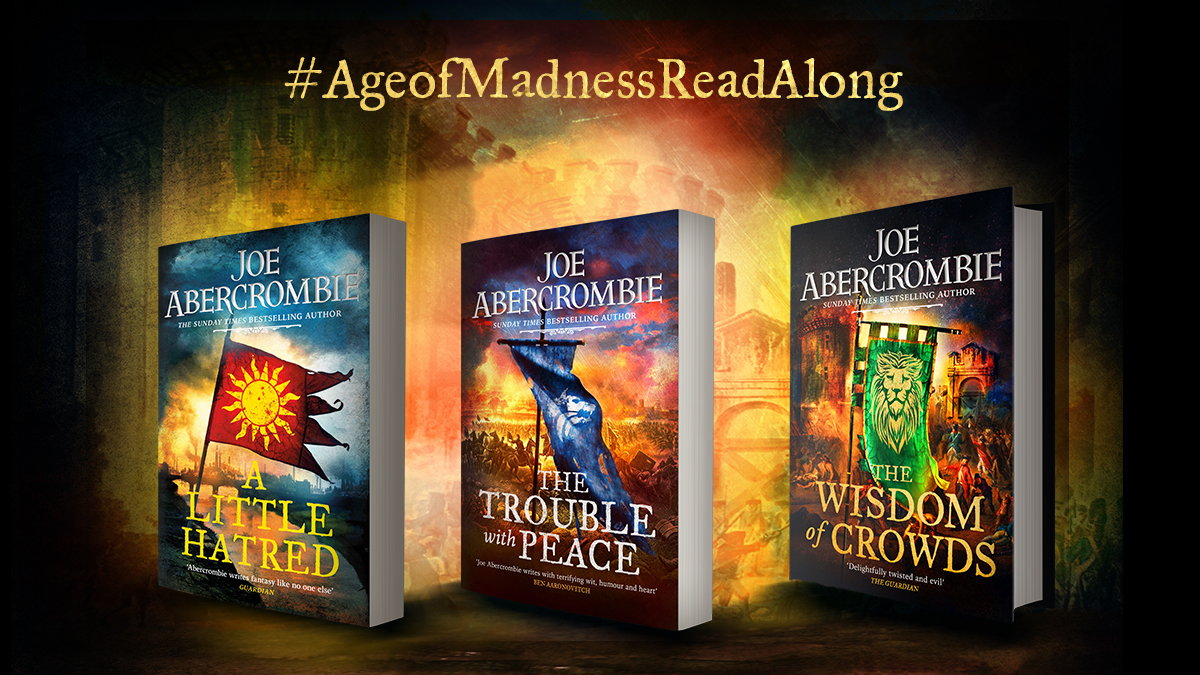 By Beth TablerAugust 2, 2021No Comments

“When one man knowingly kills another, they call it murder! When society causes the deaths of thousands, they shrug and call it a fact of life”―

The chimneys of industry rise over Adua and the world seethes with new opportunities. But old scores run deep as ever.

On the blood-soaked borders of Angland, Leo dan Brock struggles to win fame on the battlefield, and defeat the marauding armies of Stour Nightfall. He hopes for help from the crown. But King Jezal’s son, the feckless Prince Orso, is a man who specialises in disappointments.

Savine dan Glokta – socialite, investor, and daughter of the most feared man in the Union – plans to claw her way to the top of the slag-heap of society by any means necessary. But the slums boil over with a rage that all the money in the world cannot control.

The age of the machine dawns, but the age of magic refuses to die. With the help of the mad hillwoman Isern-i-Phail, Rikke struggles to control the blessing, or the curse, of the Long Eye. Glimpsing the future is one thing, but with the guiding hand of the First of the Magi still pulling the strings, changing it will be quite another…

Again, as I am somewhat new to the books of Lord Ambercrombie, his style of storytelling is starting to feel comfortable. It is immersive, descriptive, but not so much that his books feel like one long adjective. He holds the line between character-forward stories and worldbuilding that allows you to paint a picture in your mind. It is why he is considered to be one of the best dark fantasy/grimdark writers living today.

In continuation of my previous entry into the A Little Hatred Read-A-Long that covered ‘Hopes and Hatreds’ to Like Rain you can find here. We will now be concluding this exciting novel with chapters ‘Drinks with Mother’ to the ending ‘Long Live the King.’

As with the first part of this read-a-long, there will be minor spoilers. I have hidden huge plot-changing moments as best I could because this is a story that aught be read.

This chapter has one of the best opening lines/paragraphs I have read in this story, and I think it sums up Savine’s plight and mindset most succinctly.

“Savine had hoped that once she was home with her things about her, bathed, perfumed and safe in her armour of corsetry, she would be herself again. Better, in fact, because adversity builds character. She would be the deep-rooted tree that bends in the storm but cannot be broken. She would be the sword that comes through fire tempered and blah, blah, fucking blah. Instead, she was a dead stick shattered. Pig iron, melted to a slurry.”

No one escapes the ravages of personal trauma. They do and will play out as part of a character’s psyche in one way or another. Often lesser writers overlook this part of humanity. That characters can be bent, humbled on the alter of pain and experience and still find the inner strength to unbend themself enough to move on and get the job done.

Futher into the chapter, Savine meets up with her mother for lunch. It is apparently very quickly the cavern of experience that now separates her mother and herself. They discuss Prince Orso and the coming nuptials between Savine and himself. Savine is told some very important information that changes her worldview forever. We are in heavy spoiler territory here, so I cam going to be very vague in this. But this is a pivotal chapter that will define which path Savine will take in future chapters.

This chapter, much like the previous chapter is drinks with mother. But in this case, it is drinks with Orso’s mother instead of Savines. They speak a fight he had recently and how Orson has decided, finally on settling down and marrying. This time for love. In the middle of his explanation with his mother he receives a post from Savine with one sentence. “My Answer must be no. I would ask you not to contact me again. Ever.”  To say that Orso is in stunned disbelief is an understatement. He realizes that it is not only her that he lost, but the future as a better man, a worthy man.

This is a chapter between Tallow and Vick. There is much grief here on the part of Tallow. Tallow is describing the fallout from the recent uprising. “The Hanging of two hundred souls.” Later in the chapter Vick speaks with Glotka. They speak of the future and future uprisings.

Rikke is standing on a salt-encrusted deck with sailcloth snapping in the wind above her. In the distance are the cream-colored and massive walls, bridges, and towers of Adua. Adua “The Center of the World.” She speaks to Bayaz, the First of the Magi, she is skeptical and unimpressed. She asks him his business. “What brings the first magi to Adua?” She asks. “I have been detained far to long in the ruined west world by the demands of some most unreasonable siblings.” Later in the chapter the ship lands and is met with a crowd of people. Small talk is exchanged. Glotka has a very intense conversation with the Young Lion about some of his diplomatic shortcomings.

This section starts with Broad wingin the carriage handle and opening it for Savine. Broad realizes that he is coachman now. Savine looks at some of her holdings, as the vultures circle to snap at her contracts while she is indisposed.

“I cannot afford the luxury of letting you and Selest dan Heugan fuck me on this occasion.’ And she glanced over at Broad, and caught his eye.”

Broad Leans forward, very aware of what Savines needs to do. Intimidate, break if necessary this man so that he is not easily up back together again.

“Broad stepped so close to Kort that their knees touched. He leaned down and put his hands on the arms of Kort’s chair, their noses just a few inches apart, close enough that the blur of his face resolved into an expression of extreme fear. ‘You displease me,’ said Savine. ‘And I am in a mood to see things which displease me broken. Broken in such a way that they will not go back together.’ Broad gripped the chair so hard that every joint in it groaned, breathing through his nostrils, like a bull. Bull Broad, they used to call him. He acted like he was only just keeping a grip on himself. Maybe he was.”

This chapter starts with Leo feeling like an outsider at his own party. This is a party of political machinations. It is like tip-toeing around in a pool of vipers. This is not quite something Leo is good at. Rikke, also at the party feels out of place and uncomfortable. “Her own skin did not hit her.”

Later Savine sees Orso drunkenly slumped against a pillar. It brings a lot of emotional pain.

In general, this chapter is where are singular characters’ stories come together and start to cross with each other. It is important because it seems like a pivotal chapter where we can start to see the direction of many of the character’s futures, and what I would assume is leading us on to the next book in the series.

A Bit of Courage

Leo is walking through the streets accompanied by Jurand. They are looking for a specific house. One of Savine Dan Glotka. This is scandalous, hence the chapter’s name “A Bit of Ciourage.”

This is a bit of a seduction scene where Leo starts to understand the strength and terror a woman like Savine can bring.

This chapter is friendly banter between Orso and Leo and how they met remarkable women last night. There is talk about the 200 “traitors” that were hung after speaking to Orso.

Savine publically has an outburst that cracks her cool and calm demeanor. Much of this chapter is in heavy spoiler territory and is the culmination of many of the story’s events. Heavy political machinations.

My Kind of Bastard

Another chapter with heavy spoilers. But know that it involves Calder, Clover, Scale and some unfortunate things.

Orso wakes up alone, both physically and emotionally. his mother, pale in face and countenance comes looking for him.

“He felt a heavy hand on his shoulder, more grasping than comforting, and turned to see the First of the Magi standing beside him. He almost had the ghost of a smile at the corner of his mouth. ‘Long live the king,’ said Bayaz.”