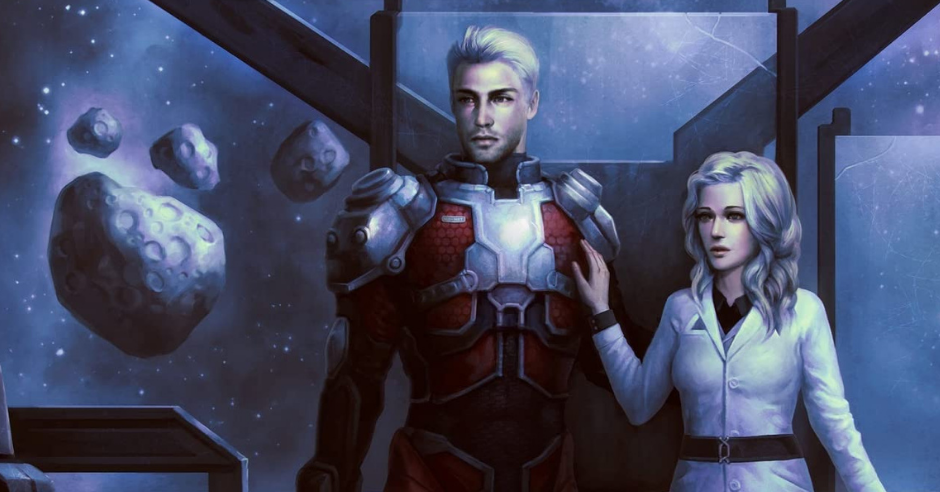 By Steve CaldwellJune 6, 2022No Comments

“Twinkle, twinkle, little star, how I wonder what you are. Up above the world so high, looking down upon us as we die. When the blazing sun is gone, when the nothing shines upon, then you show your little light. Twinkle, twinkle in the eternal night.”

As my friend CT Phipps said in his Part 1 of this list, the Indie scene has created some great opportunities for new voices to create some fantastic new worlds. It’s a sci-fi nerd’s dream come true, honestly, and as a sci-fi nerd, I heartily enjoy this new trend. With that said, here are my additions of what I consider must-reads in Mil Sci-Fi and Space Opera.

In a universe run by corporate oligarchs, the have-nots live a dreary existence with no chances for advancement unless they are willing to take some insane risks. This is where Samuel Hyst finds himself. Married, working in a dead end low pay job, to be able to support his family, he signs up for the Salvage Marines, a quasi-military corporate force who’s job it is to salvage scrap and equipment left from space and planetary battles in what is known as Necrospace. It’s a better living, but with inadequate equipment and training, facing off against other corporations salvage marines, pirates and even legit militaries is not what he expected when he signed up. It’s a great combo of mil sci fi and space opera, with a dystopian future that hopefully never comes to pass.

In a future North America, the US has taken drastic steps to reduce illegal immigration. If you’re caught, you get drafted into the US military to earn citizenship. With a far-flung group of space colonies and need to defend them against the Chinese/Korean alliance, the military machine needs bodies. This is where Rade Galal finds himself. After getting caught crossing the border, he and his friend are drafted into the military, and they both volunteer for the MOTHs, the successor to Navy SEALs. And after a grueling training program, they get stationed with a line unit, facing down threats to the US’s colonies. When they discover a new alien threat, it’s up to Rade and his fellow MOTHs to be the tip of the spear in trying to defeat this dire new threat.

This one is kind of a cheat since it is one my partner in lists books, but since I was a fan of his writing before I even met him, I figure it’s OK. It doesn’t hurt it’s a fantastic start to a series.

Cassius Mass is an officer on a smuggling ship. Running from his past as a commander and Noble in the fallen Crixus Military, he’s just looking to keep his head down and stay out of prison, or the gallows. When it turns out his ship is something other than it appears, and has a completely different mission than just smuggling, Cassius and his crew mates are caught between duty and freedom, with consequences for the galaxy at large. With the usual dollop of snark and action, this is an excellent addition to any space opera library.

This is one of those book that combines various elements of sci-fi and creates something wholly its own. When I first read it, I thought it took all the good parts of stuff like Battlestar Galactica, mixed in some Game of Thrones dynastic drama, and added the epic scale consequences of something like Kevin J. Anderson’s Saga of Seven Suns series to create a wonderful story of loss, betrayal, desperation and hope for survival.

That opinion has only solidified, as the story of Kendro, King of the Aonise people, desperately trying to save as much of his population as possible as the planet is destroyed, and then are chased across the galaxy by their ancient alien enemies bent on genocide of the Aonise, just really resonates. The lengths he’ll got to protect his people are inspiring, and the dangers he faces both outside and inside the refugee fleet could derail all his plans to save his people by escaping to a primitive planet across the galaxy: A blue planet third in orbit from its sun.

The Adventures of Kirk Rogers Inside the Moon by C.J. Boyle

The Kirk Rogers books are a refreshing change from a lot of space opera out today. Its much more a throwback to golden era pulp space opera of the kind Burroughs used to write. Chock full of sci-fi easter eggs (as the name of the main character should indicate), this story about a group of people ending up on the moon in the secret center really draws the reader in to the secret history of the human race. It’s definitely a fun ride, with action, adventure and some great characters. There’s even a touch of romance to round things out.

This is one of the newer books on my list, but is very deserving of being on the list. Taking a very different direction in its Journey, this one involves a humanity on the ropes against a superior alien foe that has the use of magic. Humans need to develop their own magic to have a chance to survive, and this is where Thorn Stellars comes in with a unique type of magic, helping lead his team of magic users to fight and potentially save humanity.

This one is one of those that mixes the best of military sci-fi and space opera. Starting with the aftermath of a mission on Mars gone bad, it follows Irish soldier Darren Loughlin as he recovers from his return from that mission, memories fragmented, and his recollections of the disaster on the Mars colony as his memories return. Dealing with elements of consciousness transfer, time travel, and some alternate history, with a deeper conspiracy to boot, it’s definitely a page turner that will keep you guessing until the very end.

This one has a lot of cool elements. An empire falling to a monstrous foe, it’s leadership all killed, and all the colonies cut off to fend for themselves. This is the situation Josiah Bleys, who definitely gives off Han Solo vibes, finds himself in, as the smuggler is held up on a prison planet as the universe turns into a dumpster fire. Being drafted by the warden, he and some marines guards must try and wrangle up supplies to live, and that’s where they run into a murderous AI running a retirement planet, and we see some wild action as the two must join forces if they expect their groups to survive the threat.

The Fall of Rho-Torkis by Tim C. Taylor

In a far future, a galactic federation is facing danger to it’s existence as a coordinated rebellion is coming closer than ever to creating anarchy. Left to stop them are the legion and militia, supposedly both protectors of the federation, but with much different methods, and enemies to each other. When a surprise attack on the planet Rho-Torkis takes down the federation forces, a group of legion and militia are thrown together on a secret mission to get information to the federation vital to it’s survival, all while trying to not kill each other or be killed by the rebels. This one just hooks you and won’t let go.

The Galaxy is a Dumpster Fire, and this is where Victory Company of the Confederation Legion finds themselves. The planet Kublar is a world on the edge of rebellion, and when the natives join with the mid core rebellion, and all of Victory Company’s support is killed in an attack on their base, Kublar finds out why the reputation of the Legion is not an exaggeration. When a military service has an unofficial motto of Kill Them First, or KTF, their enemies may want to reevaluate their life choices, and update their wills.

Imagine if in Ender’s Game the aliens didn’t show up to kill all humanity, but instead offer the wonders of the universe to humanity. All for the low price of 98% of humanity’s children age 5-12 being drafted into the alien army. When an overwhelming force shows up, thats exactly what happens. Now imagine that instead of uber-competent and mature Ender and his companions, we have regular 5-12 year olds, with all the immaturity and inability to follow instructions that entails. It’s a brutal, violent experience as they are forced to grow up and become soldiers for the Galactic Congress.