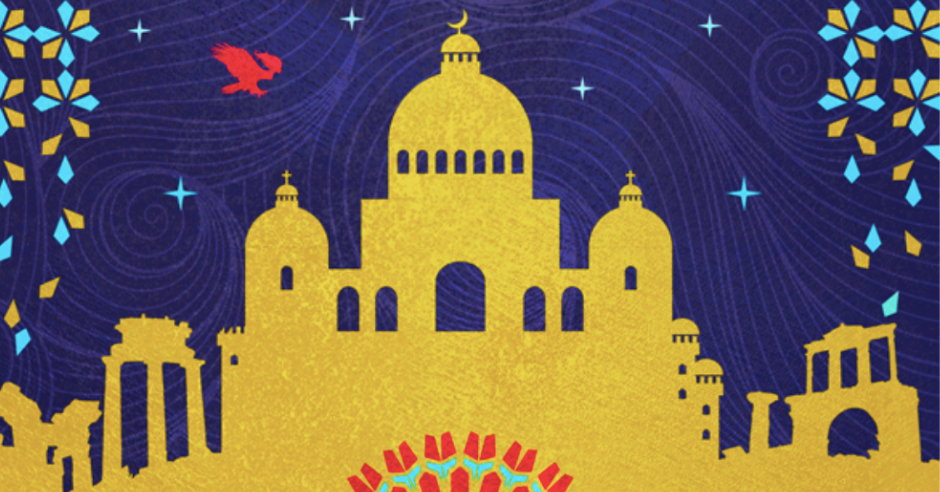 Guest Post – A Wind from the Wilderness by Suzannah Rowntree

Hunted by demons. Lost in time.

a wind from the wilderness

Hunted by demons. Lost in time.

Welcome to the First Crusade.

His family is ripped apart. His allies are slaughtered. And Lukas is hurled across the centuries to a future where his worst nightmares have come true…

Constantinople, 1097: Ayla may be a heretic beggar, but she knows one thing for sure: nine months from now, she will die. Before then, she must avenge her father’s murder–or risk losing her soul.

Desperate to find their way home, Lukas and Ayla join the seven armies marching east to liberate Jerusalem. If Lukas succeeds in his quest, he’ll undo the invasion and change the course of history.

But only if he survives the war.

Only if his enemies from the past don’t catch him.

And only as long as Ayla never finds out who he really is.

A Wind from the Wilderness is Book 1 in the new Watchers of Outremer series. If you love stories full of dark magic, bloody warfare, and star-crossed love, then you’ll be spellbound by this sweeping historical fantasy!

I am going to admit right up front, the entire reason I read this book was due to the cover. That cover art is amazing. Something about the colors and the shapes just works for me. So, to sum this particular paragraph up: Anyone who says that covers don’t matter is lying.

Anyway, as soon as I cracked the book and realized this is a historical fantasy, I was hooked. This was the book for me. I love history. Love. It. And any good retelling of some gripping historical period is something that will assuredly put my butt in my chair. What is more gripping than the Crusades? Tragedy, drama, greed, devotion… it’s all there. And reader, it’s all here, in this book, as well.

I write my own style of historical fantasy. Though I set my books in secondary worlds, they are all based on real world history you can research and learn about, and I don’t hide any of that at all. I will say, as one author who writes historically influenced novels, about another, the research process that goes into writing historical fantasy is not something that should be minimized. There’s a lot you have to get right, and a lot that takes a ton of really rigorous hours to learn, not to mention the time spent talking to experts, as well as the google searches, the books read, and the like.

I know first-hand what it’s like, how hard, and how high the payoff is when it is done right. And that payoff, you ask? Well, it’s all in the details. Small things that might not matter to anyone else, but they all work together to make this world the author has created come to vibrant life for the reader. It’s not just knowing the culture and beliefs of the day and age, the rough outline of the important information, if you will. You’ve also got to know what people typically ate, the norms regarding treatment of women, clothing styles, weaving styles, how people spent the day, the push and pull of aspects of life that were in flux, all the way down to the houses people lived in and so much more (so. much. more.). All of this brings the story to life so you, the reader, can feel fully immersed in it.

(Example: I spent two hours researching how houses were typically built in the countryside of Ukraine in the 1920’s and 1930’s for two sentences you’ll eventually read in An Elegy for Hope. People, the amount of random research that goes into writing a book is just surreal. You probably won’t notice them, but I sure will.)

“Power is a two-edged blade, Raymond. Even if one man could command this whole immense army, I’m not convinced that he should.”

Anyway, the entire point of my minor tirade there is to tell you that the research Rowntree did to write this book is not only in depth, but also richly layered into her world and the story she’s written here. Nothing was overlooked. I almost felt like I could smell the air in the cities, and see the food, feel the walls all around me. It was marvelous, and woven into the book so effortlessly, you’d not really notice how much work went into creating something that realistic and dimensional unless you really stop to think about just how the author managed it. Folks, it’s research. It’s tons and tons of research, and an uncanny ability to know when to add details and facts, and when to let readers fill in the blanks. It was incredibly well done all around.

The story in A Wind from the Wilderness is a lot of things: romance, redemption, self-exploration, and growth all set against the turbulent era of the Crusades, when war was prevalent, and men went to war in an effort to save their souls. People suffered, and people loved, and people endured tragedy and triumph. This is a rife, ready period of history to set a book. There’s so much fodder here from which authors can draw from, and I was delighted to see how well Rowntree dealt with this time period, staying true to its immediate and wider conflicts and issues, while bringing to life the very personal, very complex stories that are impacted by all that is going on around them. From two youth who should be enemies, overcoming that which should stand between them, to a knight who is on a quest to reach Jerusalem in an effort to atone for his sins, these stories not just give a human aspect to this larger than life period, but they humanize it as well.

What I really enjoyed about this book was how well Rowntree played these huge, important events against the intimate stories of individuals. It was fascinating to me, how events helped shape people, but also how she showed people influencing events rather than getting lost in them. One stone thrown into a pond might seem small and inconsequential, but the ripples that roll out from it create lasting change. Ultimately, I felt like that was what was happening here. Her characters were stones thrown into this sea of events, causing huge ripples, and yet she never lost sight of them and who they were. She never dropped any of those balls she was juggling.

“The children of earth have grown wise of late, and have driven us out of their temples. But if they can no longer be deceived, they can be corrupted. They will butcher each other for God’s sake, and I will drink and be satisfied.”

There are fantasy elements in this book, in the form of magic and time travel, but I will say I felt like the book more flirted with fantasy rather than leaning into it. This actually ended up being a positive to me. I like books that straddle the line between genres and refused to be pinned down or boxed up. Is this fantasy? Is it historical fiction? Is it both? You decide. Dare to stray from the path, you diamond. There are fantasy elements there, but I felt they were more of a perfume rather than an overwhelming plot device. That isn’t to say you’ll be disappointed if you read this book wanting magic and the like, it does exist, but if you’re a reader who wants a gentler touch with fantastic elements, this might be worth checking out.

The pacing is very measured. Never a dull moment, never a wasted page. The prologue will likely be the one where readers struggle most. You’re thrust into the center of a conflict and conversation without anything to go on. You’ll eventually make sense of it all, but you’ll likely feel a bit lost throughout reading it. The first chapter is easy to sink into. There’s a clear introductory point, and the story flows from there. Likewise, the ending had a very “first book in a series” feel to it. There’s a resolution offered, but just enough of one to keep you going through the next book. I didn’t mind that at all, because I fully intend on reading the first book. However, I figure it should be noted.

I want to talk a bit about Rowntree’s prose. She knew when to lean into the description, and when to back off. Straightforward, with spurts of beauty, The Wind from the Wilderness was incredibly well balanced, not just in plot, characterization, research, and worldbuilding, but also in the prose. Occasionally toeing the line into purple (which didn’t bother me at all because, hello, have you read my books?), she never quite crossed it, though. This balance also served her very well in making the quiet, intimate moments and the larger, louder ones far more atmospheric and meaningful all around. There were a lot of times in the reading of this book where I forgot I was just a passive observer, rather than living the story as it unfolded.

“His mouth twisted into a bitter smile. ‘Family is everything. Right?’
His words brought stinging tears to her eyes. ‘It’s not everything,’ she whispered. ‘It’s not you.’”

All in all, I was pleasantly surprised by how much I loved this book. A delightful mix of engaging and atmospheric, topped off with vivid prose and characters that were a complex mix of layers and flaws, A Wind from the Wilderness was an absolute delight to read in every respect.