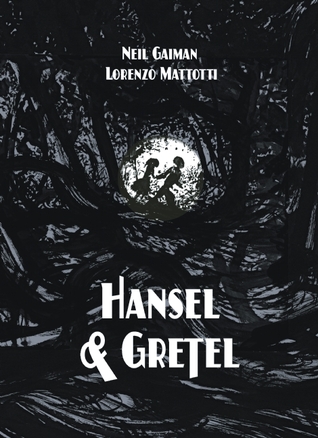 by Hansel and Gretel
by Neil Gaiman, Lorenzo Mattotti (Illustrator)

And for me, the thing that is so big and so important about the darkness is [that] it’s like in an inoculation… You are giving somebody darkness in a form that is not overwhelming — it’s understandable, they can envelop it, they can take it into themselves, they can cope with it.

Hansel and Gretel is a well-known fairy tale of German origin, recorded by the Brothers Grimm and published in 1812.
The story follows a young brother and sister who discover a house of candy and cake in the forest and a child-devouring witch.

On the one hand, Neil Gaiman’s adaptation of the classic German folk tale of Hansel and Gretel is good, because primarily the classic story is timeless. I don’t think Neil brought much to the table except a well-known name and an ability to get a project like a graphic reimagining off of the ground. The reason to read this story is the illustrations. The illustrations are done by famous Italien Lorenzo Mattotti. They completely remake what could have been a relatively tired old tale. Mattotti adds a starkness and depth to the story by employing a monotone palette and sharp lines. There is no cuteness in this story; it is a story about an old witch eating children, after all. Each panel has an almost dark and desperate quality to it.

They slept as deeply and soundly as if their food had been drugged. And it had.―

The children are lost, starving, and abandoned. But then they are found again by a seemingly kind old witch. Only to be fattened and prepared for slaughter. It isn’t a sweet tale, and it needs illustrations that match the tone, Mattotti provides them in spades.

Well worth the read just for the pictures.