Review – No Heart for a Thief by James Lloyd Dulin

This ARC was provided by the author in an exchange for an honest review and will also be published on Goodreads. 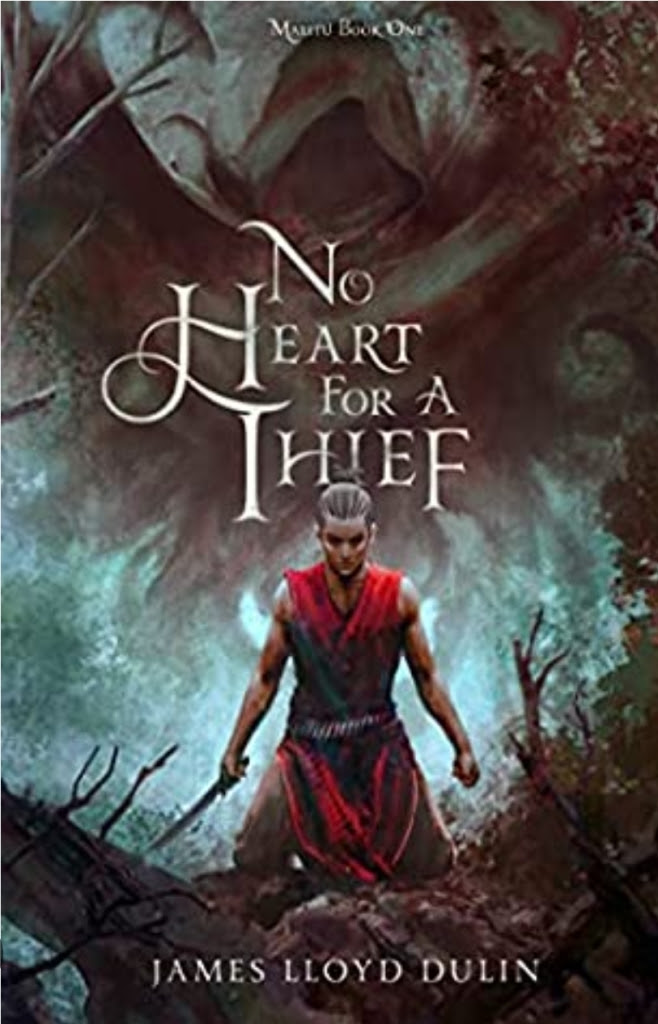 Fantasy and sci-fi stories not only have the ability to entertain and enthral us, they are a medium of story telling that can tackle difficult issues that we face in real life. Fantasy books that I have read in the past have dealt with sexuality, persecution, hate crimes, grief, the effects of war, prejudice and violence. When facing these issues through fantasy, it provides a cushion, a means to help us talk about something that we find difficult to confront within our every day lives, or on the news, or in a non-fiction book. That is the power of the fantasy genre, to keep the conversation going, to question ourselves, to question others and to ultimately bring us understanding, compassion or catharsis.

No Heart For A Thief is one of these stories. It is a dark fantasy tale set in a time of occupation by an invading force where your skin colour or the colour of your hair marks you as an inferior or dangerous person. The author has a trigger warning at the beginning of this novel and I am glad that he does. Because even as a white middle aged man, I found some moments of the story quite harrowing and emotionally challenging.

But please don’t you let that put you off. James Lloyd Dullin has written a powerful, visceral but beautiful story that centres on two characters who need each other more than they know.

Kaylo is a man who has cut himself off from human contact, hiding from the legend and myth that surrounds him, he yearns for an emotional connection but ultimately fears it too. He is The Thief and bestowed the power to steal spirit magic from others; hated and persecuted by all other dancers, people who can wield a spirit magic of their own.

Into his life comes Tayen, a young girl torn from her family by fire and violence, whose young heart is consumed by vengeance and yearns the means and weapons to exact her revenge on the Gousht empire that has taken everything from her.

Together they must find solace and understanding to one another as they are relentlessly pursued by the soldiers and trackers of the Gousht, a pale skinned, pale haired race who follow the One True God and will stop and nothing to eradicate the people of Ennea’s beliefs and way of life and enforce their own religion and doctrine on the population.

For me to give you anymore information about the story and it’s characters, would do nothing but lessen the impact that this book could have on you. James has created a powerful morality tale that I found deeply thought-provoking and incredibly immersive and that is in part thanks to his wonderful prose. At times poetic, other times philosophical, there were lines that I read where I had to take a pause and appreciate the author’s craft.

There was an art and a grace to how Jonac managed conflict. He never fought the tide. He addressed the moons, rather than the waters they pulled.

Another aspect to the author’s writing that I really enjoyed and haven’t come across that often, was the fact that the story is written in third and first person. This is because Kaylo is telling a story to Tayen within the story we are reading. Kaylo’s past is critical to understanding who he is; the people he has met, the actions he has taken, the spiritual and moral journey he has been through. This in turn is paramount to how he interacts with Tayen and the moral guidance that he is desperate for her to absorb, before her path to vengeance destroys her.

I love Kaylo as a character and we get to see where he started and the man he has become, which is the beauty of the simultaneous timelines we get. I adored how James connected both those stories through Kaylo’s advice and moral guidance to Tayen, to the very people who made an impression on his younger self, who taught him about their values, their philosophy and way of life. Jonac is one of the standout characters for me and the interaction between him and younger Kaylo is a lovely mirroring of our present relationship between his older self and Tayen. It is done with skill and aplomb and brings those timelines together beautifully.

Tayen is a beautifully realised character whose trajectory mirrors that of our young Kaylo. A child deep in grief, whose emotions are wild and erratic, she is the storm that needs calming. Though we spend the majority of time with Kaylo, I found returning back to the scenes between these two a comfort almost. Her irritation at Kaylo’s moral and spiritual guidance can sometimes be quite comical, but at the same time, as someone who has experienced the grief of losing a family member, I understand that frustration, that anger and rage that you are not in control and James gets this across wonderfully with the character of Tayen.

The magic system in this book is fantastic. When a magic system can excite me and bring something fresh to the table, you know this is an author who has spent a great deal of thought and effort creating it. There is a musical metaphor to the system, the magic users are called dancers, who attune to an energy called, The Song. Ennea, The Mother, created seven spirits, and each of those spirits can imbue itself to a person. There are elemental spirits such as The River and The Mountain and others such as The Shadow, think of it as a stealthy magic, and The Seed, which gives you the ability to control plant life and attune to nature. Lastly of course is The Thief who, when a dancer is charging up, for want of a better word, their ability, The Thief can snatch it and use that ability themselves. It felt fresh and dynamic and with James’ prose, made for some riveting action scenes.

As I mentioned up front, this book deals with some difficult themes. There is violence to children, death of family members, racism and discrimination. These of course made certain scenes deeply moving or even profound and some I found quite upsetting, but none of it was done needlessly or gratuitously. James tells a story of an invading force, attacking, conquering and occupying another races homeland. Historically conquering forces eradicate native history or culture and supplant it with their own and how James weaved this into the narrative I found fascinating and harrowing. History is written by its victors and James really stamps this home with the Gousht.

As a bit of a history buff, these aspects of the story really interested me but the heart of the book is of course our two main protagonists and the how their lives intertwine. There is an element of found family here, a real universal need to help another divert from a destructive path that you once took, to ensure a life with some contentment and happiness. I found some of the scenes between Kaylo and Tayen deeply moving and that is helped hugely by knowing what the younger Kaylo has been through.

I thoroughly enjoyed this book. The pacing is sublime, the authors prose is wonderfully engaging and the characters memorable. Because of the difficult themes the book covers, it may not be for everyone, but that’s the beauty of fantasy, there is so much diversity out there. For me personally, I engage with fantasy that challenges me, challenges my beliefs, my thoughts and actions towards others and really makes you think about the world around you and I love that.

No heart for a thief, no safe haven, only a grave will do.

As the first entry into a series, James establishes the world confidently, presents us with deeply flawed characters whose journeys have just begun, and a dark fantasy story brimming with possibilities and promise. Bring on book two Mr Dulin!

Review – THE BINDINGS OF WOE by Connor Jackson