Author of eight novels, and several short stories, Virginia McClain is a seasoned novelist, with a great track record. Her novel Blade’s Edge, Gensokai Book One, was a Self-Published Fantasy Blog-Off Finalist (SPFBO) in 2019. A lot of fellow readers have lauded McClain’s work as excellent. That reputation, and the absolutely glorious cover of Sairō’s Claw, Gensokai Book Three (though it can be read as a standalone, rather than part of a series) sucked me right in, and I put the book down as a TBR-must. Suffice to say, I was glad I did. Now, onto the review, another #FebruarySheWrote review, where I exclusively read and review the works of authors who use the pronoun she/her! 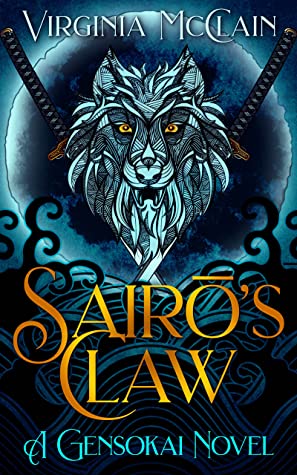 Sairō’s Claw largely follows two main characters – Torako and Kaiyo – who are on opposite sides of a conflict that is centered around another character, named Raku. Torako and Kaiyo share a lot of similarities. Both are elite in terms of fighting skills. Both are fiercely loyal to what they believe in and care about, and both are somewhat exacting and brutal on the surface, with tenderness and compassion underneath. Both are willing to fight to the death, without ever giving quarter, to defend and protect those they feel merit such devotion.

Torako, a former famous warrior,  is trying to live a quiet life, in a reclusive valley, housed in a cave with her loving wife Raku, and three-year-old daughter Itachi. Kaiyo, meanwhile, is a fearsome sea captain, devoted to her duty, and her admiral, who also happens to be her father. When the admiral dispatches Kaiyo on a mission to kidnap Raku, who is a scribe, for political purposes, Kaiyo questions the mission, but obeys the commands. To complicate the task, the admiral insists Kaiyo take fifteen hardened criminals along with her to accomplish the abduction. But, besides potential treachery on the part of the felons, even the tough and brilliant commander Kaiyo might meet her match in Torako, known as the “Night Stalker”, so legendary is her reputation as a feared fighter, and the fabled guardian of her valley home.

So, Torako will die to protect Raku, and Kaiyo is willing to die to take Raku away from Torako. Something has to give, and obviously, with two ferocious fighters like Torako and Kaiyo as opponents on a collision course with each other, blades will clash in the process, with potentially devastating results. But, unbeknownst to these two adversaries, there are secrets out there that further bind Torako and Kaiyo, even beyond Raku, and there will be revelations coming that shock them both to the core.

There was a lot to love about this book. Let’s speak about the great worldbuilding first. The Gensokai realm – the setting for McClain’s book – is heavily Japanese-inspired, and vividly depicted. McClain provides a glossary of terms at the onset of the book. Inside this glossary, some of the terms are actual Japanese words, while some are contrived to enhance  the story, to add a sense of authenticity and lushness to the worldbuilding. McClain was definitely successful in that regard. From the weapons, to the clothing, to the manner of speech, to the tea ceremonies, to the belief system, to the conventions and etiquette of Gensokai, McClain vividly paints a luxuriant picture of her world, that the reader can immerse themselves in.

The magic was fantastic, and haunting: mysterious kamis (gods), possessed swords (one of my favourite magical tropes), manipulation of elemental magic to control nature, such as wind (another favourite), sea serpents, giant wolves, and more leaped off the pages of Sairō’s Claw. There was also blood magic used to promote healing, another favourite element, which is met by extreme suspicion and mistrust by Kaiyo in particular.

I have to give McCLain a lot of praise for her combat scenes. They were top-notch. The 2000 film Crouching Tiger, Hidden Dragon, set in In 19th-century Quing dynasty China, starring Zhang Ziyi and Michelle Yeoh is one of my favourite action movies. Somehow I could not help putting Ziyi and Yeoh in the place of Torako and Kaiyo in my head, when I closed my eyes and imagined these two incredible fighters taking on all comers, after reading every great action scene written by McClain, in Sairō’s Claw. The whirling katanas, the throwing knives, the blurring combat moves, fists, kicks, and blades coming at all angles – it was dizzying, chaotic, thrilling.

It’s all about the characters for me, and these were very intriguing. Torako and Kaiyo were the take-no-prisoners type, yet were not bloodthirsty for bloodthirstiness sake, and knew when not to do violence, when it was counter-productive to their aims. Both are rather austere, and it’s only through how much they love their family that they are not as harsh as they seem on the exterior. They were sufficiently complex to keep me very engaged in their fate. The secondary characters like Tanaka, the eponymous wolf-spirit Sairō, Kitsu, and Lyt, who tended to express their thoughts, moods and emotions more readily than the two main players were nice additions to compliment Torako and Kaiyo.

In terms of themes, I must also acknowledge the fantastic representation in the book re: LGBTQ2AA+, including use of multiple pronouns, non-binary characters, and love between all genders. Kudos to McClain here, for making diversity an organic part of the story.

If you want fast-paced, this is your book. It takes all of five pages or so until the action takes off, and it only lets up in brief spells for the rest of the book. Though I prefer the slower-burn, there was certainly enough backstory for the characters, lore and culture, and political machinations and family drama to keep me entertained. Overall, this book was very well-put together.

The book ends on somewhat of a cliff-hanger! I love this technique, and loved how it was done in Sairō’s Claw, though I know not every reader enjoys cliff-hangers. Yet I feel enough resolution overall has occurred prior that this type of ending only would accentuate interest in reading the next book, rather than leaving the reader feeling disappointed.