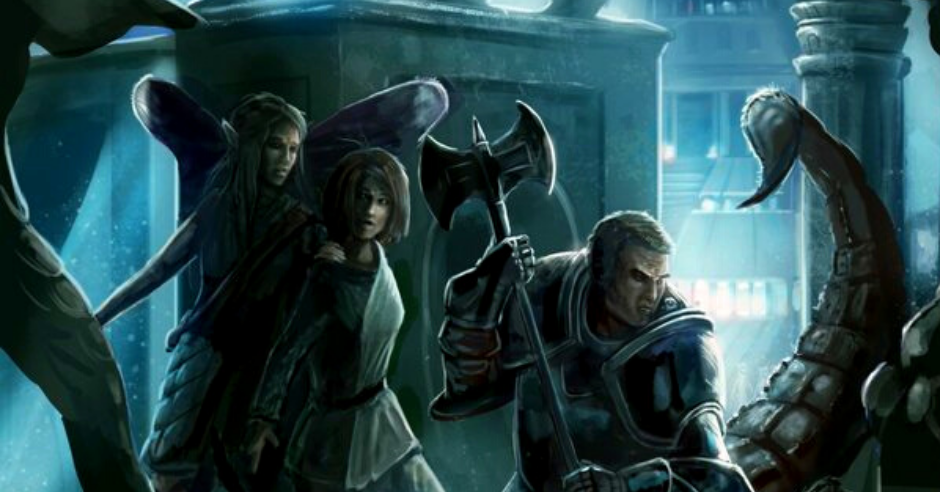 My #FebruarySheWrote reads, where I will be reading exclusively female authors who use the pronouns she/her, continues. This next book is one I had been eyeing for a while: The Moon’s Eye, Book One in The Relics of War Series, by A.J. Calvin. I found this book to be wonderful, a real hidden gem that deserves a lot more attention, in my estimation. 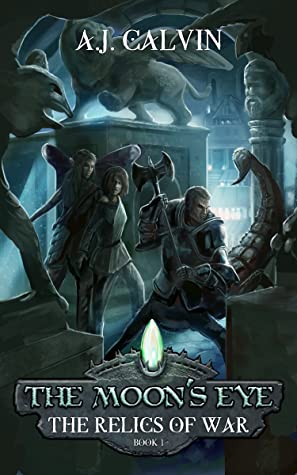 Fantasy fans who like the (enjoyable) trope of capricious gods callously manipulating hapless mortals for the gods’ own (often nefarious or at the least selfish) purposes, you are going to love this book. The setting for The Moon’s Eye is the Five Kingdoms. There, the Scorpion Men, half-scorpion, half-humanoid creatures, enjoy an uneasy peace, holed up in the vicinity of the Wasted Land, behind the fastness of The Stronghold, their formidable domains.

These partial arachnids are a stoic warrior culture, and among the best fighters is the hero, Vardak. Vardak is young, fairly reserved, but he loves his family, including his brothers, fellow warriors. Vardak has the (potentially dubious) honour of being chosen as the apprentice of the god Blademon, the Scorpion Men’s patron deity. Blademon’s sibling goddess, the ill-tempered Fire Maiden Flariel, has a human daughter, named Janna. As per Flariel, Janna requires a champion to guard her on a perilous quest, and Blademon tasks the reluctant Vardak with the job.

The quest involves recovering the titular Moon’s Eye. The Moon’s Eye is a powerful artifact, and is needed to combat another powerful relic, the Shalin Stone. The reason why the Shalin Stone is so dangerous is that it can be used to summon the malevolent powers of The Nameless, a Satan-like figure, whose main servants are the hideous, demonic, Soulless. The Nameless is currently shackled and neutered, but if his Soulless can use mortals to their advantage, they will be able to free their master to once more wreak havoc on the world.

Unfortunately, the Shalin Stone is in the hands of a madman, the sorcerer Shan’tar, who controls an army of Murkors. Murkors are mysterious tattooed humans, who remain hooded at all times. They are as formidable warriors as the Scorpion Men. Shan’tar plans to summon the Soulless, to aid in his plans to conquer the Five Kingdoms. The Murkor commander, Aran’daj, just wants to keep his followers alive, and not be the pawn of wizards or demons. Aran’daj is a man who always has a plan, and he plans to find a way to extricate his subordinates from the clutches of those who would use the Murkors as expendable foot soldiers in their unholy wars.

The Soulless, whose seat of power is the foreboding Obsidian Tower, have dissension among their ranks, vying for the favour of the Nameless. The incumbent successor to the Nameless, Alyra, is challenged by the most powerful Soulless, Dranamir. Dranamir is using the Princess Tamarin, who killed her own parents, and training Tamarin in the dark arts, as the young Princess has latent magical powers. Meanwhile, the Soulless Kama, a great strategist, has his own mission, as he takes Aran’daj as his right-hand man, to lead the Murkors into battle.

Finally, the Shining Tower, training academy for sorcerers where Shan’tar was a member of the Council, is the place where talented newcomer Tavesin, has found a portal to the Aetherium. The Aetherium is the gateway by which the Soulless enter the Five Kingdoms. But Tavesin’s intrusion to the Aetherium has come to the attention of one of the demons, putting him in grievous danger.

Calvin spins an intoxicating, complex tale, filled with numerous races and creatures. Reptilian Drakkon, the warlike and fascinating Murkors and Scorpion Men, intrepid feline-like fighters, sea serpents, and more, come to life on the pages of “The Moon’s Eye”. Calvin’s layered and nuanced world-building is exceptional. Her prose is illuminating, and vivid; the book is very well-written.

The characters are fascinating, and there were just enough POVs to give a fulsome picture of the major plot threads, without being overwhelming. Calvin nicely ties all the important characters and their arcs together as the book progresses.

Vardak is an interesting lead. He’s pragmatic, taciturn, but has plenty of flavour to his personality. My favourite was the general Aran’daj, whose dogged resolve to save his people, facing extermination for the slightest failure, via the hands of his pitiless Soulless master, made him compelling and admirable.

This book is an amazing example of a classic-feeling fantasy tale, that while not groundbreaking in themes, feels fresh, inventive, is well-paced, very well-written, and is loads of fun. A quick read at around 350 pages, I barely put this one down, and polished it off in an evening plus an afternoon.

My only quibble about this book is that, along with the great map provided, a glossary of characters as a reference, would have been handy, to keep things sorted.

If you’re looking for an under-the-radar book that had the potential to be a fantastic first installment in what could shape up to be an very intriguing series, don’t sleep on this one! I will definitely be picking up book two, The Talisman of Delucha, coming later in 2022!