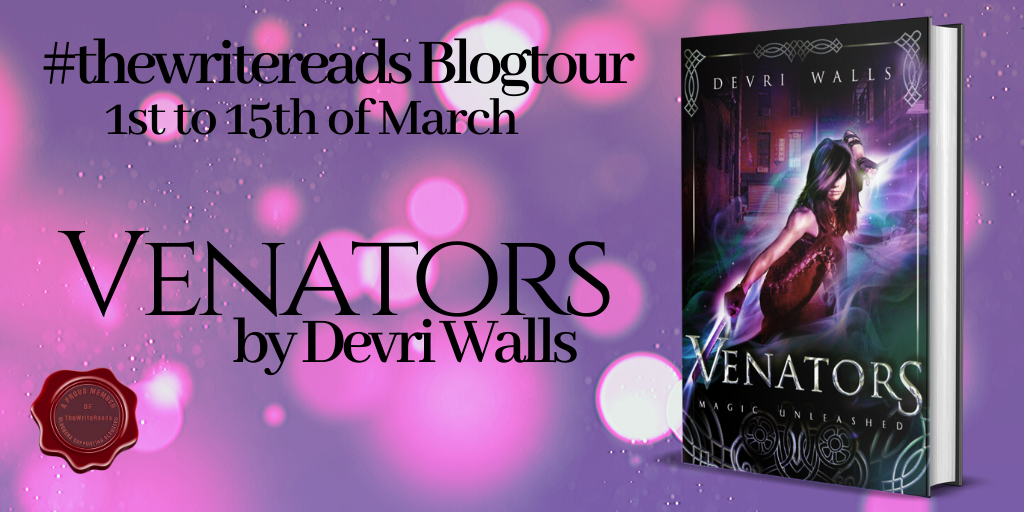 Grey took a ragged breath and looked around one more time, unable to shake the sense of foreboding that crawled up his spine like a host of thin-legged spiders―

Six years ago, Grey Malteer was attacked by creatures he thought couldn’t possibly exist. They repeated a word, calling him a name he’d never heard before…Venator. Since then, his life has been a hellhole of secrecy—hiding old pain alongside strange new abilities.

Rune Jenkins has an itch, as she calls it, but it’s more than that. It’s an anger that builds up like the inside of a boiler whenever she’s around anything remotely supernatural. The pressure is growing steadily worse and she can’t understand why. All she knows is—her control is slipping.

By order of an unknown council Grey and Rune are pulled through a portal in the St. Louis arch, landing them in an alternate dimension where creatures of myth and legend exist. A realm that calls them, Venators.

Made up of centuries old fae, vampires, werewolves, elves and succubi the council’s corrupt nature becomes obvious as they seek to wield the newly returned Venators as weapons. Wedged in an impossible position, Grey and Rune must decide their fate—do they go against the council’s wishes and help the innocents of this unforgiving land, or face the possibility of execution by the council.

Venators is a fast-paced novel about two intertwining stories, Grey Malteer and Rune Jenkins and Rune Jenkins. At the beginning of the story, Rune and Grey are just typical college students. Rune and Grey study for classes and avoid bullies and studying for classes. Rune has a fit of wild anger that erupts whenever she is around anything paranormal. Gray has powers that that that he tries to keep quiet. Through a bit of craziness, Rune and Gray are pulled through a portal into a world of the paranormal: fae, vampires, werewolves, and more. What happened when two unlikely heroes are pulled into a new world?

“This is amazing!” Rune grinned, looking more alive than ever. ―

This is an exciting story. It took me a while to get into it and get to know the characters, but once I did, I enjoyed the plot quite a bit. Rune, for instance, is a flat character in the beginning. I found her reactions to the paranormal to be too much. However, as the book continues onwards, her personality changes, and she comes more into her own. Grey was attacked six years ago. This attack forever changed him. He has spent the last six years living with what happened to him, but knowing that there was more in the world.

I recommend this story to anyone who enjoys some light fantasy. The characters are fun, there is narrative progression, and by the end, you are cheering on the characters.

I received a copy of this for the tour from The Write Reads.

Devri Walls lives in Kuna Idaho with her husband and two kids. She has worked as a music teacher and currently, a preschool teacher. She majored in theater and her love of a story still drives her today. Thankfully, she has finally found an outlet for all the voices in her head.