Home » All Reviews » Review – Tangle of Choices by Eve Koguce

“The two different worlds have made the first diplomatic steps towards each other, but at the same time they keep aloof from closer emotional and personal involvement.” 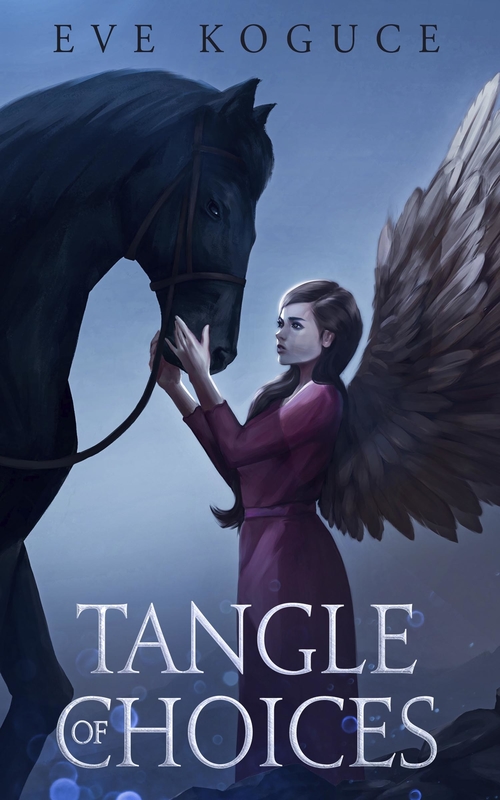 I finally got to read “Tangle of Choices”, Book 2 in the dystopian fantasy-romance “Neglected Merge” Series by the phenomenal author, Eve Koguce. “Neglected Merge”, the first installment in the series, was one of my favourite reads from 2021.

It has also picked up quite the impressive hardware, in terms of accolades, since its publication: winning a Silver Medal at the 2021 Global Book Awards; being a Finalist in the 2021 Readers’ Favorite International Book Award Contest; and an Honorable Mention in the 2021 Royal Dragonfly Book Awards.

“Tangle of Choices” should also go on to garner writing awards, as Koguce continues her outstanding work, creating highly believable and fascinating characters, crafting compelling stories full of emotion and heart, and spinning prose in an elegant and very unique style that I have come to adore.

“Tangle of Choices” picks up the story of main character Tauria, her husband Doron, and all the other auxiliary characters, seven years after the events we saw transpire in “Neglected Merge”. Tauria, now a Winged One, and Doron, are blissfully happy with each other. There are some relationships that are yet in doubt, and require some mending, such as Tauria and Byrne, but for the most part, contentment reigns over Tauria’s life. However Doron is growing increasingly disenchanted with the leadership of the Winged Ones, including the head of the Senate and overall Ruler, his father Duxe.

But there are far more troublesome problems brewing. While the different worlds of Winged and Wingless are growing closer than ever before, as interracial unions blossom in addition to that of Tauria and Doron, as the two camps begin to live together more harmoniously, the group of Rebel Wingless that oppose peace are stirring up trouble.

The Rebels begin abducting both Winged and Wingless Ones, demanding Tauria in exchange for those they have kidnapped. No one can be sure of what sinister plans the Rebels have for the wife of the future Winged leader, and Doron does everything he can to convince his beloved wife not to offer herself as a sacrifice, even for the greater good.

But Tauria bravely insists on being exchanged for the safe return of the hostages, surrendering herself to the mysterious Rebels, led by the enigmatic Grayson. What do the Rebels truly want with Tauria? How can she save herself, and the hard-won peace that exists between Winged and Wingless, a peace that she was instrumental in forging? Will the cost for Tauria be losing Doron, the breakdown of two societies, madness, or ultimately death? And could there be even more personal costs to bear for Tauria, too horrible to even contemplate?

“Tangle of Choices” is beautifully written, full of heartfelt moments, temptation, passion, intrigue, unrequited love, and tension. Tauria courageously faces danger, uncertainty, and desperation in a hostile environment, that pushes her considerable reserves of intelligence, compassion, and diplomacy to the brink. Meanwhile those who care for her – Doron, Duxe, Dayah, Byrne, Alfred, Abelia, Mirana, and more – struggle with their own interpersonal challenges, while distraught over Tauria’s safety, and determined to rescue her.

This was an incredible follow-up to “Neglected Merge” and I will be moving onto the series finale, “Shifting Directions”, as soon as possible. A definitive five-star rating for “Tangle of Choices”!