Review – The Girl and the Moon by Mark Lawrence

“Yaz Shrugged, “I think it’s just what what people are like everywhere if you give them enough to eat and some spare time. We build wonders and horrors in equal measure. Sometimes both at the same time.” 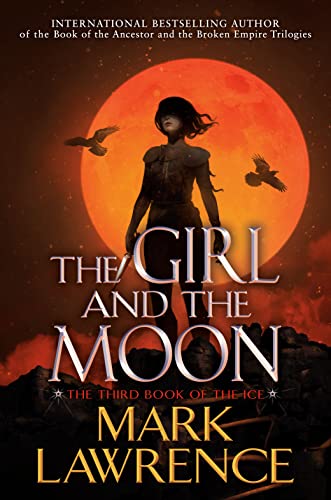 I had very high expectations for The Girl and the Moon, the final installment in The Book of the Ice trilogy, and Mark Lawrence blew those expectations out of the water. Lawrence is known for his consistent high-quality writing, and even by those high standards this ranks among his best work to date.

Mark Lawrence does an outstanding job with all aspects of worldbuilding and character development. I love the characters and the friendships that develop among them, which become especially strong in this final volume of the trilogy. There are so many touching moments and subtle callbacks to Lawrence’s earlier books. For example, the last words that Yaz utters to a young Sister Pan in The Book of the Ice are exactly the same last words that centenarian Sister Pan uses to implore Nona Grey at the end of Holy Sister. Mark Lawrence is so good at capturing these details, which add extra emotional depth as well as understanding of the connections across his five trilogies.

Speaking of connections, this is the book that brings everything together from across all five of Mark Lawrence’s trilogies. I had guessed at some of the connections prior to reading The Book of the Ice, but there was still so much here that I hadn’t predicted. I’m not going to spoil anything for your future reading enjoyment, but let me just say that one character who is never mentioned by name in either The Book of the Ancestor or The Book of the Ice has been present in subtle and not-so-subtle ways across both of these trilogies. It’s not until the midway point of The Girl and the Moon that this becomes clear, and even then this character is not mentioned by name. Looking back, there were so many subtle hints sprinkled across all the books and even Mark Lawrence’s short stories. For example, his short story, “The Devil You Know,” essentially spells out one of these important connections. It went right over my head the first time I read it, but now the connection is obvious. The clue is even there in the title.

When it comes to interconnected universes, Brandon Sanderson’s Cosmere usually gets the most attention, and indeed he has done a tremendous job conceiving the multiple planets, religions, magic systems, world-hopping characters, etc., throughout his universe. Across his fifteen books, Mark Lawrence has built an equally impressive universe across two planets (Earth and Abeth), but he has built these connections in a much more subtle way. In his Cosmere books, Sanderson is quite explicit about all of these details. In the Lawrencian universe, Mark Lawrence leaves much more to the reader to notice subtle details and put the pieces together. I love both of these universes, but I have found Mark Lawrence’s work to be the more rewarding of the two, owing to the more subtle way that he approaches his worldbuilding. Also, while Sanderson’s writing ranges from excellent (think Words of Radiance) to mediocre (in some cases), Lawrence’s writing is consistently outstanding. He combines the lyricism of Patrick Rothfuss with the ability to put out at least one new book every year (not the ridiculously high publication rate of Sanderson, but still very high).

The key character that runs throughout all of Mark Lawrence’s books is Dr. Elias Taproot, whom we first meet as a brilliant young scientist in the Impossible Times trilogy set here on Earth. Taproot appears again throughout the post-apocalyptic Earth depicted in both The Broken Empire and The Red Queen’s War trilogies. And then he is present on Abeth in a subtle way in The Book of the Ancestor and more explicitly in The Book of the Ice. But the connections across the trilogies run so much deeper than just one character, spanning religion, anthropology, history/mythology, and science/technology.

The scientific and technological aspects of Lawrence’s work are especially rewarding for me as a reader, particularly in how he cleverly blends fantasy and science-fiction. All the “magic” depicted across his trilogies has a scientific or technological basis. This becomes apparent if you put together the pieces of information from across his body of work.

Although I’m emphasizing the brilliant interconnected universe that Mark Lawrence has created, I should also stress that any of these trilogies, including The Book of the Ice, can be enjoyed independently of the others. In other words, you don’t have to read all these other books before reading The Book of the Ice. The trilogies themselves can be read in any order.

As a trilogy, The Book of the Ice is more of a slow-burn than Mark Lawrence’s other work. The first book, The Girl and the Stars, takes place in the stark world of the ice-tribes on Abeth. Much of it occurs underground, with many scenes having a claustrophobic, fever-dream-like quality. The first half of The Girl and the Mountain finds Yaz and friends confronting the priests of the Black Rock and then trekking their way across the dangerous ice toward the narrow Corridor of green vegetation that encircles Abeth. It’s not till the latter part of The Girl and the Mountain that Yaz’s storyline intersects directly with The Book of the Ancestor, when she finally arrives at the Convent of Sweet Mercy.

I love how Mark Lawrence writes about Yaz’s experiences in the Corridor during The Girl and the Moon. The vibrant colors and smells are a stark contrast to the white, sterile world of the ice. I smiled so many times as Yaz ate the delicious food of the Corridor or encountered animals and plants for the first time.

Most of all, I love the friendships that were developed among the four characters who arrived from the ice (Yaz, Quina, Thurin, and Erris), together with the novices and sisters of Sweet Mercy. This is so well done, at the same level that Mark Lawrence employed throughout The Book of the Ancestor. I would suggest that another appropriate name for The Girl and the Moon would be Mystic Sister, since this book feels like a fourth installment of The Book of the Ancestor and the two principal characters (Yaz and Mali, a.k.a., Sister Pan) are both powerful quantals.

The Girl and the Moon is a book that is intellectually stimulating while at the same time having a lot of heart. I’ve formed such a strong emotional bond to this book—to all of Mark Lawrence’s novels, actually—which is a testament to his ability to develop such an amazing cast of characters across an intricately detailed and intellectually compelling universe.

Let me just say it: The Girl and the Moon is my #1 new book of the year. I hope you will enjoy it as much as I have.