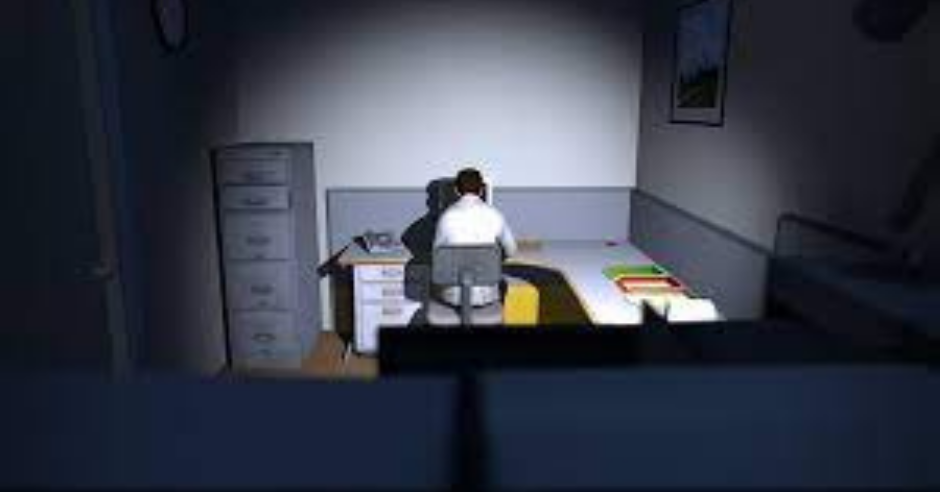 From Wikipedia, “The Stanley Parable is an interactive storytelling and walking simulator video game designed by American developer Davey Wreden…”
“While both the mod and the remake use the first-person perspective common to other Source engine mods, there are no combat or other action-based sequences. Instead, the player guides Stanley, the game’s protagonist, through a surreal environment while the narrator, voiced by British actor Kevan Brighting, delivers exposition. The player has the opportunity to make numerous decisions on which paths to take, and because at times the narrator says what Stanley will do next, the player can choose to ignore the narration and make a different choice. Every choice made by the player is commented on by the narrator, and depending on the choices the player makes, they will encounter different endings to the game before it restarts.”

“Choice: It’s the best part of being a real person, but if used incorrectly, can also be the most dangerous.” – Training video voiceover, The Stanley Parable

I think that The Last of Us was an outstanding game, and if the writers had so chosen, could have been an outstanding movie as well. To the Moon is game with a beautiful and touching story, which I believe could also be made into an outstanding novella. Baten Kaitos goes out of its way to blur the distinction between the real world and the game world, and when I pick it up for a re-play I almost feel like I’m visiting old friends; its story could stand proudly next to any of a number of fantasy epics.

The Narrator of the game has a very specific agenda: he has a story to tell, and he needs the cooperation of the player to make the decisions that will drive the story forward. By some counts, there are as many as 19 different endings to the game, and there’s only one that the Narrator considers “correct.” The Narrator will complain, cajole, insult, beg, or simply manipulate the game in order to keep things moving the way he wants. Ultimately, though, he is powerless: no matter what he says or does, he isn’t the one with the controller. But then again, neither is Stanley.

One of the most clever things the game does is to describe Stanley as an employee whose job is to push buttons. “Orders came to him through a monitor on his desk, telling him what buttons to push, how long to push them, and in what order… Stanley relished every moment the orders came in, as though he had been made exactly for this job.” Then, as the game begins, you’re faced with an open door and the suggestion that Stanley moves forward to explore the office – and therefore you, as the player, know that you should push the “walk forward” button for a few seconds, and thereby relish this moment of gameplay. Thus, when the Narrator is demanding that “you” press some buttons, it’s not always obvious whether he’s talking to Stanley or to you.

On the whole, I spent a great deal of my play time laughing (loudly), as The Stanley Parable’s crisp sense of timing and delivery lets each of its well-written jokes shine. The little bit of time I wasn’t laughing was by design: I spent a lot of time thinking about what choices I was making and why; how the Narrator was or wasn’t able to manipulate my choices; how much of what I was doing reflected my personality versus my priorites as a game-player. It’s a game that has stuck with me for years, and I enthusiastically bring it up in any conversation about best or favorite games. Ultimately, I feel like the game is worth ten or fifteen hours of anyone’s time, and that’s about how long it should take to discover most of the endings on your own. If you’re a completionist, you’ll want to discover all 19 endings, but you shouldn’t feel bad if you need some hints or a walkthrough to find them all. I’ll also admit that there’s one ending that I’ve only ever seen via a Youtube video (the story calls for four hours of button clicking – I’m a huge fan of the game, but I have my limits). All that being said, though, I’ve never regretted a single second I’ve invested in the game, and I hope you’ll be inspired to take it for a spin.

Much of the biographical information for this post was taken from https://en.wikipedia.org/wiki/The_Stanley_Parable

This is a guest post by Mark Tabler, who by day turns Chinese food into Ruby code and by night is a webcomic aficionado. Also, he is a licensed locksmith, blacksmith, wordsmith, and pretty much any other smith you can think of. You can find his marvelous words on everything from gaming to slot machines here;  Mark on Quora.

Guest Post – The Balance Between Personal Life and Writing by S. Kaeth