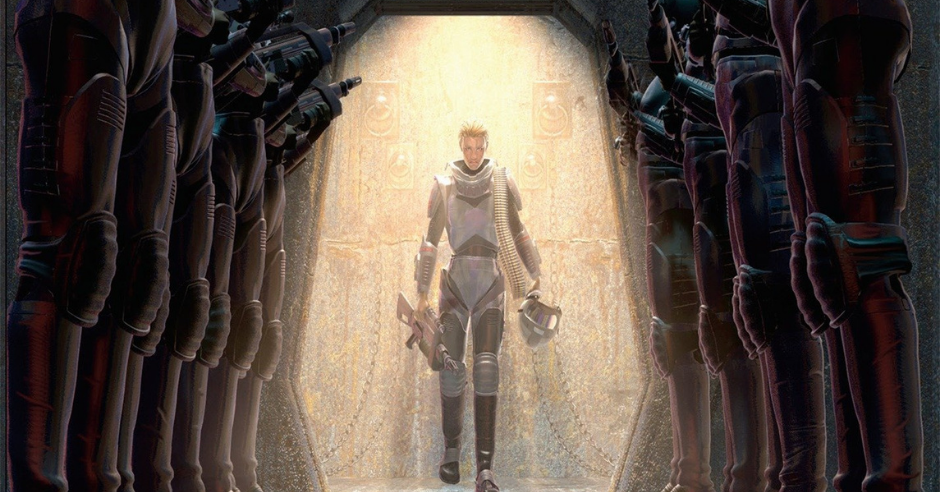 DAUNTLESS (The Lost Fleet #1) by Jack Campbell has the premise of Captain John “Black Jack” Geary being a officer who has been stuck in stasis for a century. Much to his dismay, he finds out his heroic last stand has been elevated to Davey Crocket at the Alamo/King Arthur levels of proportion. So much so that he is treated as the Second Coming when he is finally rescued, as well as the man who is to deliver them from the same enemy he “died” fighting so many years ago.

It’s not a bad premise, though I think Jack Campbell overdoes it. Tactics have degraded in the future to the point everyone just flies at the enemy and gets killed, he’s constantly reminded of how awesome he is (while thinking he’s not), and everyone who is skeptical of him is either evil or dramatically overreacting. One character assumes he’s going to either get them all killed in a heroic attack or try to take over the Alliance. Despite this, I very much enjoyed the setting and liked the focus on the laws and customs of war. John is a person who comes from a more civilized time and is appalled by the treatment of prisoners in the present. I think few books bother to treat the “enemy” characters as anything but targets so this was a nice change of pace.

The starship battles are well-designed with a focus on fleet action as well as real-world tactics (applied to space) like formation, training, and the importance of discipline. Jack Campbell worked in the Navy and its influence on his work is obvious. It’s nice to see someone who bucks the usual trend of military mavericks. Jack just wants a disciplined well-oiled machine and he’s got a bunch of Leeroy Jenkins in starships.
Characterization-wise, most of the people involved are a bit broad. John Geary is the “only sane man” on the ship as everyone is just determined to kill the enemy by attacking relentlessly. He’s also a subject of great suspicion by the civilian governments because they have no experience with any officers who don’t have utter contempt for them. There’s some similarities to Captain America as well as King Arthur with a moral paragon waking up to take the reigns, even as John is nothing like the tough-talking badass that history has made him out to be.

I feel like there’s some missed opportunities here as Jack never really takes time to mourn anyone who might have died while he was asleep as well as the sheer culture shock of waking up a century later. Instead, he’s all business and his problems are primarily with how the Navy has degenerated into a band of pirates. I feel like giving him a Peggy Carter equivalent or have him react to his initial awakening would have been more interesting.

On the other hand, I have to say I’m very impressed with the villains. I very much enjoyed the idea of the enemy being an ultra-capitalist cyberpunk state run by corporations. That’s something you don’t see often in military science-fiction and while they mostly remain targets, they eventually do get fleshed out in future books (particularly the spin-offs).

Speaking as an author of space opera fiction, I’m always on the lookout for new or classic fiction in the genre to read. Mind you, I’m one of those lumps who originally had his exposure limited to Star Trek and Star Wars. I’ve always thought of it as a visual medium so while I love Babylon Five, Battlestar Galactica, Mass Effect, and Halo–I never quite got into the literary side of things. Well, you know, until I decided to write it myself. After writing Lucifer’s Star, I did become an afficianado of military science fiction and have read many authors I’ve since come to love. Lost Fleet is an excellent example of the genre and one that was recommended to me many times before I picked it up.

In conclusion, this is an entertaining fun book even if it’s not something that I absolutely felt I had to read. Still, if you’re looking for deep characterization and a less-than-perfect hero then this isn’t the series for you. On my end? I don’t mind a little competence porn and read the entire series. Those who love big epic space battles and a guy trying to bring an unruly crew together will find a lot to love in these books. Dauntless is only the start of an epic series and it continues right until a truly epic climax (no spoilers). I should note that I listened to the audiobook and very much enjoyed its narration.