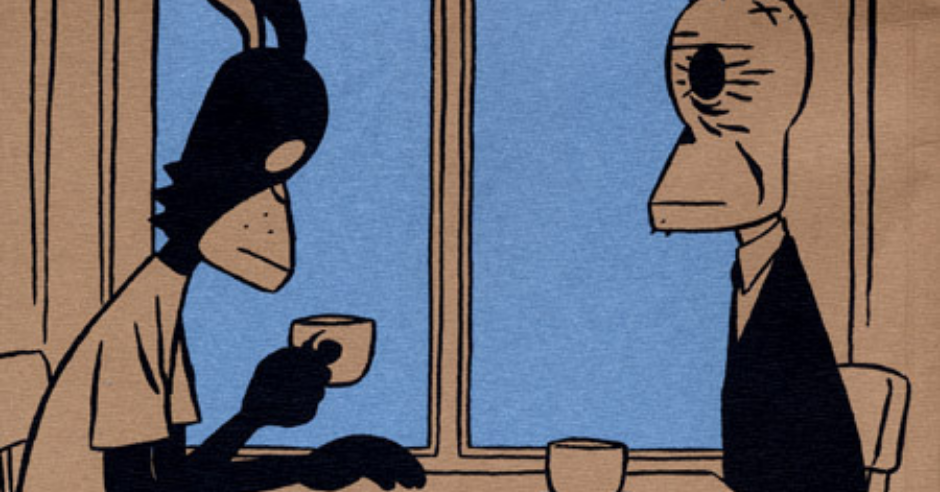 By Beth TablerOctober 9, 2021No Comments

From the Publisher, “One of Europe’s most exciting young cartoonists makes his American debut. This superbly evocative graphic novella by the award-winning Norwegian cartoonist Jason (his first appearance in the English language) starts off as a melancholy childhood memoir and then, with a shocking twist midway through, becomes the summary of lives lived, wasted, and lost. Like Art Spiegelman did with Maus, Jason utilizes anthropomorphic stylizations to reach deeper, more general truths, and to create elegantly minimalist panels whose emotional depth-charge comes as an even greater shock. His sparse dialogue, dark wit, and supremely bold use of “jump-cuts” from one scene to the next (sometimes spanning a number of years) make Hey, Wait… one of the most surprising and engaging debuts of the year.”

This is a tale of childhood friendship, loss, guilt, and the affects of a single choice over the course of a lifetime. It will rip your heart out and leave you feeling melancholic and reminiscing about your personal actions long past.

Jason(single name only) is the nom de plume of one of Norway’s most famous comic authors. In a typical Scandinavian style, Jason’s work can be both morose and hopeful in the span of a single page. He pieces together complexity through simple forms which have become his most well-known style. Much of the time his simplicity is successful and can be read as poignant instead of contrived. This simplicity in drawing and layout is great for a few pages, but over the course of the novel, it can be confusing and dulling. As is the case for this story. Same goes for the anthropomorphic animals, another one of his archetypes. Over the course of the story, it makes it difficult to differentiate between the different characters.

“Hey wait…” Words that are so simple, but sometimes if they are not heeded, disaster can strike. “Hey wait…” don’t cross that street. “Hey wait…” watch out for those open wires. Stop and pause before making your next choice. The protagonist’s “Hey wait…” was not heeded, and his friend died. What came after is the rapid growth into a character that never really moved on afterwards. He is forty years old and in a holding pattern and in a lot of ways part of him died with his friend.

The question that is asked by many readers of Jason’s novels and specifically this one, is what happens at the end? It is not easily identifiable wrapped up ending. It is ambiguous and on multiple readings you may still not have the answer. Did the protagonist die? Did he destroy his adulthood and start over bringing his friend Bjorn back? You can sit and debate the nuances of each panel, line weight and intent of the author for hours. In the end, it doesn’t matter what the author’s intentions where, what matters is if this spoke to you. What do you think happened? I am not going to tell you my answer, I don’t want to influence outcomes. But, if you do end up reading this I would love to know yours.

John Arne Sæterøy (born 16 May 1965 in Molde), better known by the pen name Jason, is a Norwegian cartoonist, known for his sparse drawing style and silent, anthropomorphic animal characters.

Check Out some of our other graphic novel reviews