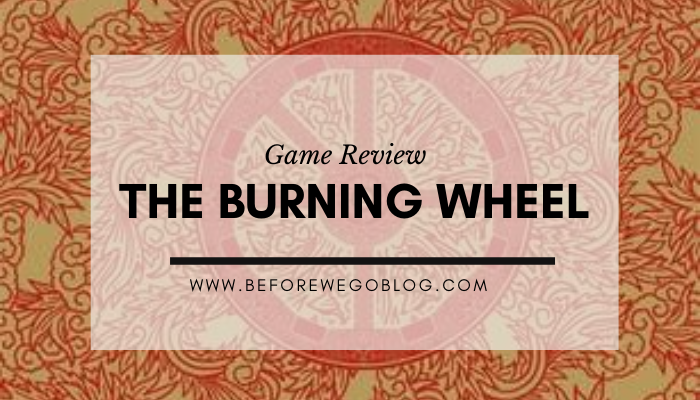 Games – You Should Play Burning Wheel

Home » All Reviews » Games – You Should Play Burning Wheel

“Burning Wheel is a fantasy system that is wildly different from Dungeons and Dragons or Pathfinder. It’s much more personal. It requires more buy-in from the players, and more record-keeping, but I feel it’s worth it.”

The latest and greatest version of Burning Wheel.

But there are consequences to every decision, ramifications to every action. The choices you make close off one path, while opening another. This philosophy underpins the character creation system for Burning Wheel. And it’s not just a matter of pushing a point here, or nudging a number there: As soon as a player decides to make a character in Burning Wheel, he is confronted with decisions about the character s past, ethics, beliefs, scars, goals and dreams. Questions whose answers affect not only the player s character, but the shape of the story as a whole.

Burning Wheel is presented in an easy-to-read writing style, with plenty of insight and advice from the designer. If you’re not careful, Burning Wheel will change the way you play roleplaying games. The Gold Edition combines both the Revised Edition’s Burning Wheel and Character Burner. It has been reorganized for clarity and updated by the author.

Why You Should Play It

Other than books, my favorite pastime is tabletop roleplaying.

Back in 2002, an old roommate of mine offered to run Dungeons and Dragons 2e for myself and another friend. I agreed, and never looked back—which was a problem, because my dwarf fighter was killed 5 minutes in by the wizard fireballing a duergar and getting me in the blast radius.

There’s often a split in tabletop RPGs between mechanically dense games and narrative games. Burning Wheel threads that needle. It has a lot of mechanics underneath, most of which flow together seamlessly. The characters you make in the system feel much more realistic and fleshed out. They’re defined by what they want more than anything else. That the game came out in 2002, before the rise of games like Fate or Powered by the Apocalypse, is sincerely stunning.

Burning Wheel is a fantasy system that is wildly different from Dungeons and Dragons or Pathfinder. It’s much more personal. It requires more buy-in from the players, and more record-keeping, but I feel it’s worth it. There aren’t classes. There aren’t levels. There’s not even a point-buy system like in GURPS or Champions.

You create a character using a set number of lifepaths. These lifepaths indicate what you did through your life up until the game started. Where were you born? Were you a student, a laborer, a sailor, or a merchant? A farmer or a fishwife or a wizard or a noble?

Each lifepath has certain skills and traits, and also creates pools for your stats, resources, and other things later. Burning Wheel has over 200 skills, and a similar number of traits. Some traits are positive, some are negative, and some simply are.

Instead of leveling, you advance by using the skill you want to use. Failure is (usually) fine as far as advancement goes—even if you didn’t succeed, you learned. Use your sword a certain number of times, and you’ll get better at using your sword. The more you use cryptography, the better you get. You can, and should, learn new skills constantly. You’ll likely fail a lot early on, much like in life. But that’s fine, so long as you keep at it.

The game uses only six-sided dice in pools. The better you are at something, the more dice you roll. 4s and above succeed. You can also get help from other players if they have the same skill, and you can use a FoRK—a Field of Related Knowledge—to get extra dice as well. For example, a die from Astrology could be added to a navigation roll if you used the stars to help navigate.

Then comes the biggest part: BITs. BITs stands for Beliefs, Instincts, and Traits. Beliefs are what your character desires above all else. “I will destroy the Duke by embarrassing him at the ball. I will destroy the Duke by turning his servants against him.” Beliefs are player-created, and tell the storyteller what that player wants from the game.

Instincts are things your character is always ready to do. “Sleep with a knife under my bed.” “Talk my way out of trouble.”

Traits are simply reflections of who your character is, as determined by their lifepath.  These can be changed every few games by a vote from the players, so if your lifepath gives your character a trait you dislike, you can simply ignore it. The only problem is that by ignoring it, you wouldn’t get artha for it.

Artha is the meta-currency Burning Wheel runs on. It rewards the player for creating good drama and driving the story forward. If you play up your Beliefs, Instincts, and Traits you’ll gain Artha that you can spend to make your rolls more likely to succeed when it’s needed. To use the example above, if you embarrass the Duke at a ball, you have achieved a belief, and can get artha from it.

The characters in a Burning Wheel game rarely have access to the wild powers of D&D. Wizards need to roll to cast a spell, and failure can have unfortunate consequences, so it’s never taken for granted. When part of the game was a wilderness survival story in Burning Wheel everything felt tense and even small things like a horse throwing a shoe could have repercussions. By contrast, a 2e D&D cleric could simply cast a spell once a week to ignore hunger, thirst, fatigue, and extreme temperature damage.

Burning Wheel also has three subsystems—Fight, which is only meant to be used for fights that have a lot of meaning to a player (if it’s just some mooks, you can just do a single roll) Range and Cover, which is used if there’s a lot of distance between two attacking groups, and Duel of Wits, which is social combat. The existence of Duel of Wits by itself makes Burning Wheel one of my favorites, and no game I’ve played since has done social combat so well.

The lifepaths, the skills, and the Beliefs, instincts, and traits all give the game a feeling of verisimilitude. The wide skill list gives characters more options to deal with problems than violence or deceit. The characters get depth by virtue of having their life and their goals clearly on the character sheet. And that sheet will change constantly as the character learns new skills and finds new beliefs.

If you’d like some more character-focused fantasy, in a more realistic setting, I cannot recommend Burning Wheel enough.