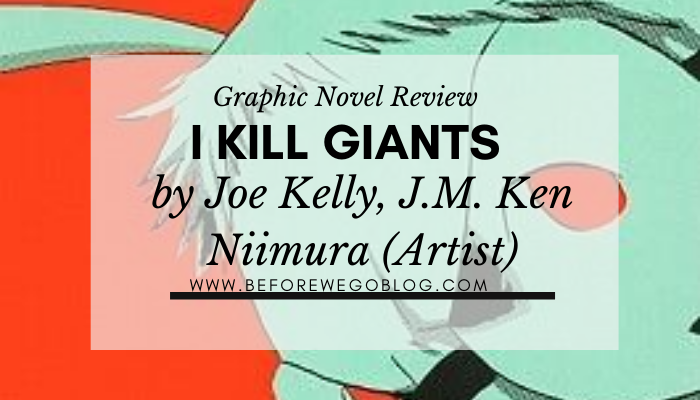 An Unusual Story About How A Child Channels Her Grief

We’re stronger than we think.―

All things that live, die. This is why you must find joy in the living, while the time is yours, and not fear the end. To deny this is to deny life. To fear this… is to fear life. But to embrace this… Can you embrace this?―

I Kill Giants is one of those graphic novels that will speak to each person who reads it at least once in their lives. No one wants to take a direct look at pain and grief, especially when that pain is in the form of how a child sees the world. But, I Kill Giants tackles grief to show how imaginative children can be without ever dumbing down the content.

It is intense, and once you understand what is going sad and brilliant.

“All things that live, die. This is why you must find joy in the living, while the time is yours, and not fear the end. To deny this is to deny life. To fear this… is to fear life. But to embrace this… Can you embrace this?”

It starts with the protagonist fifth-grader Barbara and her disconnected view of the world. She is everything you would think of an eccentric, intelligent kid of her age should be. She wears bunny ears, doesn’t connect with other kids, and goes out and slays giants.

Giants aren’t real, right? According to Barbara, they are. Due to her obsession with giants, kids at school are cruel. Which, as someone who survived 8th grade, can attest to is real. Due to her overactive imagination, Mrs. Molle, the school counselor, takes an interest in her and wants to help her. Armed with her bunny ears, Barbara sets traps to catch the giants. And, she bravely believes that she can face the giants and be the hero.

“You are stronger than you think.”

The pain of this story is Barbara’s reality. Instead of dealing with the pain of her Dad’s departure and her mother’s illness, she slays giants. Things she can control. All of this is not immediately obvious. It is a graphic novel; Barbara could be a girl who truly goes out and slays giants. But, this story is deeper and more profound. It is a story about grief and loss and how people channel that. Compartmentation seems like such an adult concept, except that it isn’t.

I know that the concepts in this story are not everyone’s forte. Dealing with depictions of grief is difficult for some readers, but what I liked most about this story is, sadly, every person in this world will have to deal with grief. Along with joy, grief is one of the most human of emotions. It helps define our lives. And, even though I wanted to take Barbara in my arms during most of the book and tell her that everything will be ok, I couldn’t. It wasn’t going to be ok; Barbara’s mother is going to die. This story is one to get the tears rolling.

Graphically, I Kill Giants has a very crisp exaggerated Manga style. Many of the panels were explosive—Especially those dealing with the giants. The pain in her life is immense, and the giants are too.

I love Barbara, I have been Barbara, and I will someday, sadly, be Barbara again. If you want a well-written story, exciting visuals, and a character that you will empathize with and cheer for, you should read this.

“And I’m a little mean to people who are dumb. And most people are dumb.”

Man of Action Entertainment, the bi-coastal creative studio started in 2000, created the megahit Ben 10 and Generator Rex for Cartoon Network. Man of Action, a writers collective, served as co-executive producer and writer for Marvel’s Ultimate Spider-Man and is currently an executive producer/writer for Marvel’s Avengers Assemble on Disney XD. Man of Action Entertainment consists of creators Joe Casey, Joe Kelly, Duncan Rouleau and Steven T. Seagle. Disney/Marvel’s Academy Award®-winning feature Big Hero 6 utilized the characters and team created by Man of Action as credited in the main titles. The film marked the first time Disney turned Marvel comic book characters into an animated film and is also the first film based on a comic book I.P. to win an Academy Award®. The quartet collectively worked on the largest franchise characters in comics from Superman to X-Men before refocusing on creating their own original worlds/characters for their original comic books and graphic novels published through their Man of Action imprint at Image Comics. In comics, Kelly’s Eisner-nominated I Kill Giants (illustrated by Ken Niimura) received numerous awards and accolades domestically and internationally including the “International Manga Award” in 2012 and was named the one of the “Top Ten Great Graphic Novels for Teens” by the Young Adult Library Services Association upon its release. Now I Kill Giants is in pre-production as a feature film with a script by Kelly and producers including Man of Action Entertainment, Chris Columbus’ 1492 Pictures, XYZ Films and Treehouse Pictures. Kelly’s legendary Superman story, Action Comics #775: “What’s So Funny About Truth, Justice & the American Way?” was turned into a hit DC Universe 2012 animated film, Superman vs. The Elite, scripted by Kelly. He’s long been credited with revising and revitalizing Deadpool. Whenever life allows, Kelly is proud to teach Writing for Animation at his alma mater, NYU’s Department of Dramatic Writing, where he earned his MFA. Kelly’s current comic book projects include the dark irreverent comedy, Bad Dog, Four Eyes, the genre-splicing revenge tale about dragon-fighting in depression-era Manhattan, and BANG!TANGO, a crime noir thriller that is violent, sexy, and perverse — while simultaneously an examination of violence, sex, and perversion. Man of Action Entertainment is also producing the feature film Officer Downe based on Man of Action original graphic novels. Man of Action Entertainment will also be creating/writing/producing a new Mega Man animated series with 26 episodes in 2017 for Dentsu and Capcom and they are also returning to their original creation as Executive Producers of a new Ben 10 series for Cartoon Network. If you want to know more about Man of Action, you can follow them at their not-so-secret headquarters Online: http://www.ManOfAction.TV