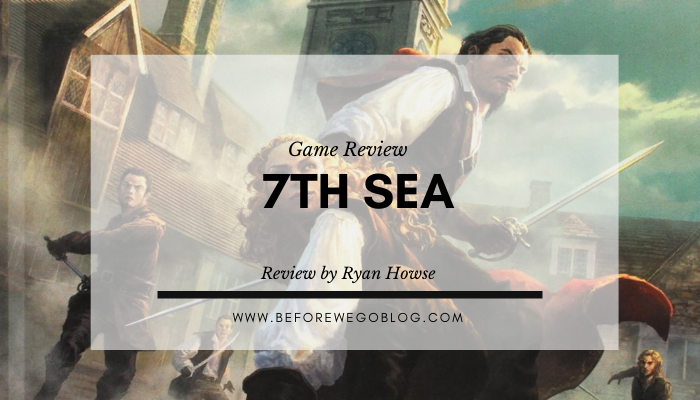 Games – You Should Play 7th Sea by Chaosium Inc.

Every Roll Is A Gamble

7th Sea is a tabletop roleplaying game of swashbuckling and intrigue, exploration and adventure, taking place on the continent of Thah, a land of magic and mystery inspired by our own Europe. Players take the roles of heroes thrown into global conspiracies and sinister plots, exploring ancient ruins of a race long vanished and protecting the rightful kings and queens of Thah from murderous villains.

This is part of an ongoing series where I recommend tabletop RPGs to you fine folk. Note that this particular column is about 7th Sea first edition. I have no experience with the second edition. That doesn’t always matter—Burning Wheel and Numenera, the other two games covered in this column so far, both had different editions that altered rules but kept most of the ideas intact—but 7th Sea 2nd edition was a wildly different, narrative system unlike the more traditional first.

I have played a lot of different games over the years, and even though it’s been a long time since I played 7th Sea, my memories of it are still fresh and great. 7th Sea lends itself very well to a very cinematic style of play. 7th Sea was originally made back in 1999. Unfortunately, it closed up by 2005, despite an attempt to use the then-popular 3rd edition D&D d20 Open Game License for a brief bit of time. The second edition was made via Kickstarter in 2016. I backed that, though as I said, I’ve not played it—backing it did, however, also give full access to all the first edition pdfs. They are all currently accessible on drivethrurpg.

Unlike Burning Wheel, which has no pre-made setting, and Numenera, which has a setting but an intentionally vague one, 7th Sea takes place in Theah, an analogue to Europe in the 17th century, with its various nations standing in for England (Avalon) France (Montaigne) Russia (Ussura) and so on.

The setting also includes analogues to the Spanish Inquisition, the Invisible College, the Templars, the Fae and Arthurian myth, and plenty more. It takes real historical ideas and then makes them fantastical, or takes myths and legends of a place and makes them real. And it’s chock-full of pirates and musketeers. In 7th Sea, people of noble lineage can have sorcerous powers depending on which country they come from. Ussura has shapechanging, Montaigne creates magical portals, and Vodacce (Italian) has fate magic. Eisen, the German analogue, has no magic but has a powerful yet light metal called dracheneisen instead.

7th Sea only uses d10s. It has five stats (Brawn, Resolve, Wits, Panache, Finesse). Each one is on a list from 1 – 5 points. It also has a long list of skills, which are also from 1 – 5. You combine the number of dice from your stat and your skill, roll them all, and keep the number of dice that are part of your stat.

So if you’re doing Surgery (Wits) and you have three wits and two points in surgery, you roll five dice and keep the best three. If you’re doing Surgery and you have four wits and three points in surgery, you roll seven dice and keep the best four. It also has exploding 10s, which means as long as you’re unwounded, you can reroll any 10s you roll. Combat is pretty simple—with all those rolls, all you generally need is a 15. But, you can add raises to it.

This is something you need to declare before you roll, rather than after, so your roll has a sense of stakes. Take the easy 15 and roll a 30? You get one hit when you could have gotten four. Put your stakes too high and not get it? Sorry, you miss everything. Every roll is a gamble, which feels very appropriate for this kind of swashbuckling. A lot of the villains will have what’s called a Brute Squad, which means that you only need to hit them

once to knock them out of combat. This hits that cinematic feeling I mentioned earlier. So a 15 Target Number would knock one out, a 20 would get two out of combat, and so on. If you succeed, you get to
determine how you get all the brute squads knocked down so fast. If there’s a chandelier, you swing on it. If you’re on a boat, use the rigging.

There are more difficult villains as well, of course. Mostly these ones are designed to be more like the heroes. Because it’s a pre-made setting there are dozens of created ones, which is good because creating them does take a bit of time otherwise.

It’s a simple system. The pace moves quickly and it’s intuitive without being overly reductive. There are areas with greater complication, such as the magic system and the swordsman schools, but none of it is difficult.

Other Reviews In This Series

You Should Play Numenera

You Should Play Burning Wheel