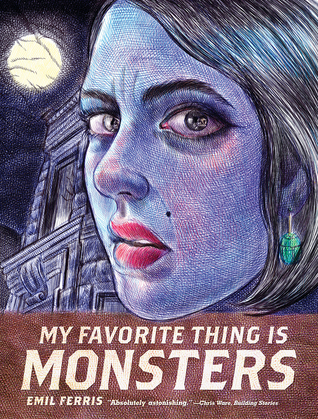 Comics and graphic novels, until very recently, have been a male-dominated field. Comics were for boys, not little girls. The perception is rapidly changing and it is so exciting to see such wonderful books come out on to the forefront and say comics are for everyone. This is by no means a definitive list but marks some great examples of new books.

From the publisher, ” They took her throne. She told them to keep it.
Former child queen Elida was driven from her throne at age ten and forced to wander the galaxy, evading the revolutionary forces that wanted her dead. When an old frenemy claims to know the whereabouts of Elida’s long-lost mother, she is forced to return to her former kingdom and stage a rescue.
If Star Wars was directed by the Coen brothers, you’d have Vagrant Queen. Brought to you by Eisner-nominated and GLAAD Media Award-nominated author Magdelene Visaggio, illustrator Jason Smith, colorist Harry Saxon, and letterer Zakk Saam, this is one wild ride. “

You want a wild ride, this story will give you a wild ride. Magdalene, of Eternity Girl fame, helms this story about former child queen Elida. Elida, having been deposed years ago, is pretty much an all-around badass thief and smuggler. The writing is and graphics are razor sharp. The plot is a very typical rogue scoundrel a la Firefly and Hans Solo, but instead, we have a female character who does not fall into typical writing tropes. It is just a damn fun read and so wonderful to have a female lead who takes no guff.

Hyperbole and a Half

From the publisher, “This is a book I wrote. Because I wrote it, I had to figure out what to put on the back cover to explain what it is. I tried to write a long, third-person summary that would imply how great the book is and also sound vaguely authoritative–like maybe someone who isn’t me wrote it–but I soon discovered that I’m not sneaky enough to pull it off convincingly. So I decided to just make a list of things that are in the book:

*These are lies. Perhaps I have underestimated my sneakiness!”

True story, I had never heard of Allie Brosh till last year when I found a copy of this story at a second-hand shop. My husband and I poured through it over the course of a weekend and laughed ourselves silly. She is us, neurosis and all.

This book which made me laugh so many times I lost count. I either full on guffawed or chuckled; each “chapter” is a perfect bon mot on something that will make you feel all the feelings. Most of the scenarios I have felt or gone through myself. I too have a psychotic dog that wants to end the existence of all other dogs by doing a scream yodle thing.  So, this book is a weirdly relatable collection of great stories and I am not sure how comfortable I am with that. It all made me realize that I am in fact this weird. As for her actual writing, her wit is honest and open even when dealing with tough subjects such as depression. It doesn’t come off as simplistic, but relatable and real. It was such a pleasure to read. I would recommend this book to anyone

In a future just a few years down the road in the wrong direction, a woman’s failure to comply with her patriarchal overlords will result in exile to the meanest penal planet in the galaxy. When the newest crop of fresh femmes arrive, can they work together to stay alive or will hidden agendas, crooked guards, and the deadliest sport on (or off!) Earth take them to their maker? “

Bitch Planet makes me so happy and I do believe that Kelly Sue is my spirit animal. It is so over the top awesome. Feminism.. we got that. Badass female characters.. got that too. The best clap back against body shaming I have ever read. YAS. It isn’t for everyone, but if you appreciate the over-the-top kind of graphic novels this is the one for you.

Through the Woods – by Emily Carroll

‘It came from the woods. Most strange things do.’

Five mysterious, spine-tingling stories follow journeys into (and out of?) the eerie abyss.

These chilling tales spring from the macabre imagination of acclaimed and award-winning comic creator Emily Carroll.

I added this as a nod to those who like a little horror with their graphic novels. This is well done and indicative of a cool artist style in a graphic novel format. It is effective and downright scary in some parts. Worth checking out.

This One Summer by Mariko Tamaki, Jillian Tamaki

Every summer, Rose goes with her mom and dad to a lake house in Awago Beach. It’s their getaway, their refuge. Rosie’s friend Windy is always there, too, like the little sister she never had. But this summer is different. Rose’s mom and dad won’t stop fighting, and when Rose and Windy seek a distraction from the drama, they find themselves with a whole new set of problems. It’s a summer of secrets and sorrow and growing up, and it’s a good thing Rose and Windy have each other.

In This One Summer two stellar creators redefine the teen graphic novel. Cousins Mariko and Jillian Tamaki, the team behind Skim, have collaborated on this gorgeous, heartbreaking, and ultimately hopeful story about a girl on the cusp of her teen age — a story of renewal and revelation.

This book is a collection of smooth and quiet moments. For me when reading, not all moments have to jump off the page at you. Life isn’t like that, and neither should writing about life be. It is highs and lows, of which the author has written about so well. Also, Tamaki has walked a very delicate line, she has created a book that can easily be viewed from both sides of childhood divider. Kids and teenagers can read this book and relate to the moments that Windy and Rose experience throughout a Summer: Scary movies, talking about boys, walking home at night through the scary dark, and swimming in the lake. All these moments are quintessential parts of a summer childhood experience. However, simmering in the background are very adult-like issues such as pregnancy, inability to conceive, marriage dynamics, peer dynamics, anxiety, and depression. These issues touch Windy and Rose, and they react to them with a burgeoning adult understanding. Adults can read this story and read about these adult moments from a different lens and think back to what it would have been like to be at the age on the cusp of becoming an adult. It is very well written.

This is a worthy award winner and should definitely be checked out. Wholeheartedly recommend.

In this graphic memoir, Alison Bechdel charts her fraught relationship with her late father.

Distant and exacting, Bruce Bechdel was an English teacher and director of the town funeral home, which Alison and her family referred to as the Fun Home. It was not until college that Alison, who had recently come out as a lesbian, discovered that her father was also gay. A few weeks after this revelation, he was dead, leaving a legacy of mystery for his daughter to resolve.

This is an autobiographical memoir graphic novel. It is sarcastically written and heartfelt. You can tell Alison has a flair for writing levity into the most sundering of situations. It is engrossing and a wonderful read.

From the best–selling author of Persepolis comes this gloriously entertaining and enlightening look into the sex lives of Iranian women. Embroideries gathers together Marjane’s tough–talking grandmother, stoic mother, glamorous and eccentric aunt and their friends and neighbors for an afternoon of tea drinking and talking. Naturally, the subject turns to love, sex and the vagaries of men.

As the afternoon progresses, these vibrant women share their secrets, their regrets and their often outrageous stories about, among other things, how to fake one’s virginity, how to escape an arranged marriage, how to enjoy the miracles of plastic surgery and how to delight in being a mistress. By turns revealing and hilarious, these are stories about the lengths to which some women will go to find a man, keep a man or, most important, keep up appearances.

Full of surprises, this introduction to the private lives of some fascinating women, whose life stories and lovers will strike us as at once deeply familiar and profoundly different from our own, is sure to bring smiles of recognition to the faces of women everywhere—and to teach us all a thing or two.

Again, this is a semi-autobiographical story about the lives and history of a group of Iranian women. It is vibrant and well written with a definitive narrative from each of the members of the get-together. It is women talking candidly about their lives and an excellent read.

Castle Waiting graphic novel tells the story of an isolated, abandoned castle, and the eccentric inhabitants who bring it back to life. A fable for modern times, Castle Waiting is a fairy tale that’s not about rescuing the princess, saving the kingdom, or fighting the ultimate war between Good and Evil, but about being a hero in your own home.

The opening story, “The Brambly Hedge,” tells the origin of the castle itself, which is abandoned by its princess in a comic twist on “Sleeping Beauty” when she rides off into the sunset with her Prince Charming. The castle becomes a refuge for misfits, outcasts, and others seeking sanctuary, playing host to a lively and colorful cast of characters that inhabits the subsequent stories, including a talking anthropomorphic horse, a mysteriously pregnant Lady on the run, and a bearded nun.

Hands down one of my favorite graphic novels I have ever read. It is witty, smart and wonderful with a great fantasy story underneath. Linda Medley needs to be on more best-of lists for this great bit of writing and graphics.

Anya could really use a friend. But her new BFF isn’t kidding about the “Forever” part.

Of all the things Anya expected to find at the bottom of an old well, a new friend was not one of them. Especially not a new friend who’s been dead for a century.

Falling down a well is bad enough, but Anya’s normal life might actually be worse. She’s embarrassed by her family, self-conscious about her body, and she’s pretty much given up on fitting in at school. A new friend—even a ghost—is just what she needs.

Or so she thinks. Spooky, sardonic, and secretly sincere, Anya’s Ghost is a wonderfully entertaining debut from author/artist Vera Brosgol.

To call this writing and plot clever is an understatement. This story takes you places you were not prepared for. Hello, Plot twist! The writing is a masterpiece,

Set against the tumultuous political backdrop of late ’60s Chicago, My Favorite Thing Is Monsters is the fictional graphic diary of 10-year-old Karen Reyes, filled with B-movie horror and pulp monster magazines iconography. Karen Reyes tries to solve the murder of her enigmatic upstairs neighbor, Anka Silverberg, a holocaust survivor, while the interconnected stories of those around her unfold. When Karen’s investigation takes us back to Anka’s life in Nazi Germany, the reader discovers how the personal, the political, the past, and the present converge. Full-color illustrations throughout.

Another great series, and not just for graphic novels but great in general. The characters, story artwork are all top notch. It absolutely revels in the 60’s Chicago backdrop. Read it, trust me.