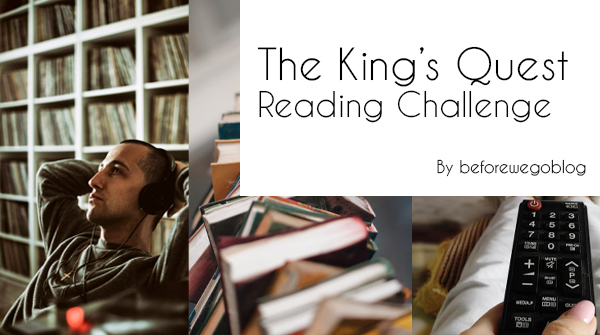 The King’s Quest Reading Challenge – All of Stephen Kings Books

All of the Stories Out of Castle Rock, Maine

I am your number one fan.―

Are you a Stephen King fan?

I am. King isn’t for everyone. He is sometimes overly wordy and descriptive, crazy, dark and moody.

But sometimes, King’s stories bring magic. Some of the great pieces of horror and suspense from the last 50 years have come from him.

As a test for myself, I thought about taking on something pretty outstanding. Something that will challenge me. I want to explore a writer in their entirety. This brought me to King’s bibliography. Over the years I have read quite a lot of king. As it stands I have read about half of his bibliography. However, I have huge gaping holes of things I haven’t read. This year as a challenge for myself, I am going to attempt to read everything King has written. I am calling this The King’s Quest in honor of one of my favorite game series from childhood.

I know the list looks incredibly long, but there is quite a bit of overlap. We shall see what I can do!

The world is insane. You only have to watch the news to know it. ―

Welcome to Derry, Maine …
It’s a small city, a place as hauntingly familiar as your own hometown. Only in Derry the haunting is real …
They were seven teenagers when they first stumbled upon the horror. Now they are grown-up men and women who have gone out into the big world to gain success and happiness. But none of them can withstand the force that has drawn them back to Derry to face the nightmare without an end, and the evil without a name.

Outside a peaceful town in central Maine, a monster is waiting. Cujo is a two-hundred-pound Saint Bernard, the best friend Brett Camber has ever had. One day Cujo chases a rabbit into a bolt-hole—a cave inhabited by sick bats. What happens to Cujo, how he becomes a horrifying vortex inexorably drawing in all the people around him makes for one of the most heart-stopping novels Stephen King has written.

The Gunslinger – The Dark Tower

Thousands of miles away from the small township of ‘Salem’s Lot, two terrified people, a man and a boy, still share the secrets of those clapboard houses and tree-lined streets. They must return to ‘Salem’s Lot for a final confrontation with the unspeakable evil that lives on in the town.

A modern classic, Carrie introduced a distinctive new voice in American fiction — Stephen King. The story of misunderstood high school girl Carrie White, her extraordinary telekinetic powers, and her violent rampage of revenge, remains one of the most barrier-breaking and shocking novels of all time.
Make a date with terror and live the nightmare that is…Carrie

When it first appeared, one volume per month, Stephen King’s THE GREEN MILE was an unprecedented publishing triumph: all six volumes ended up on the New York Times bestseller lists—simultaneously—and delighted millions of fans the world over.
Welcome to Cold Mountain Penitentiary, home to the Depression-worn men of E Block. Convicted killers all, each awaits his turn to walk the Green Mile, keeping a date with “Old Sparky,” Cold Mountain’s electric chair. Prison guard Paul Edgecombe has seen his share of oddities in his years working the Mile. But he’s never seen anyone like John Coffey, a man with the body of a giant and the mind of a child, condemned for a crime terrifying in its violence and shocking in its depravity. In this place of ultimate retribution, Edgecombe is about to discover the terrible, wondrous truth about Coffey, a truth that will challenge his most cherished beliefes… and yours.

#1 New York Times bestseller! In a high-suspense race against time, three of the most unlikely heroes Stephen King has ever created try to stop a lone killer from blowing up thousands. “Mr. Mercedes is a rich, resonant, exceptionally readable accomplishment by a man who can write in whatever genre he chooses” (The Washington Post).
In the frigid pre-dawn hours, in a distressed Midwestern city, desperate unemployed folks are lined up for a spot at a job fair. Without warning, a lone driver plows through the crowd in a stolen Mercedes, running over the innocent, backing up, and charging again. Eight people are killed; fifteen are wounded. The killer escapes.
In another part of town, months later, a retired cop named Bill Hodges is still haunted by the unsolved crime. When he gets a crazed letter from someone who self-identifies as the “perk” and threatens an even more diabolical attack, Hodges wakes up from his depressed and vacant retirement, hell-bent on preventing another tragedy.
Brady Hartsfield lives with his alcoholic mother in the house where he was born. He loved the feel of death under the wheels of the Mercedes, and he wants that rush again. Only Bill Hodges, with two new, unusual allies, can apprehend the killer before he strikes again. And they have no time to lose, because Brady’s next mission, if it succeeds, will kill or maim thousands.
Mr. Mercedes is a war between good and evil, from the master of suspense whose insight into the mind of this obsessed, insane killer is chilling and unforgettable. Now an AT&T Audience Original Series