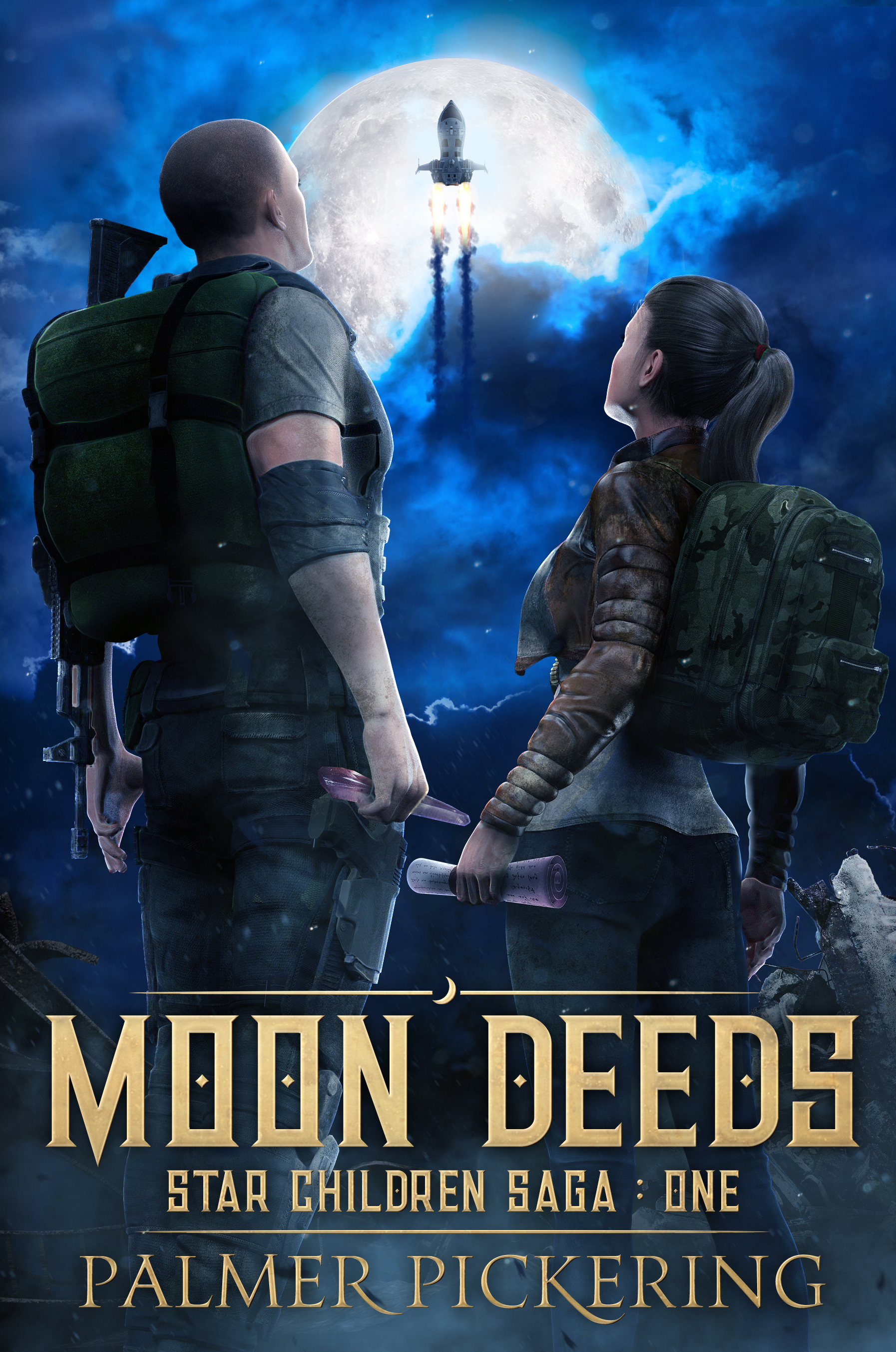 What it is All About

The ideas behind the longer arc of the “Star Children Saga” are more “what ifs.”

“Moon Deeds” is my debut novel, and the genre is adult Science-Fantasy. “Moon Deeds” is the first in a multi-book series, the “Star Children Saga,” which I have been working on for over ten years. I got the idea for “Moon Deeds” one Christmas when my brother gave everyone in the family a gag gift: a deed to a land parcel on the moon. He is a character, and swore the deeds were legit. I imagined the possibility that they were in fact real, and that I did in fact own land on the moon. And then I imagined an extreme scenario
where our descendants who inherited said lunar deeds would really, really need them. That is how “Moon Deeds” was born.

“Earth in the grip of a military dictatorship.”

The ideas behind the longer arc of the “Star Children Saga” are more “what ifs.” What if all the various legends worldwide of visitors from outer space, or angels descending on shafts of light, or giants descending from the hills were true? What if we are descended from humanoids from a distant planet who seeded the galaxy in a diaspora of star people, and we have cousins on other planets?

What if the further we get from the home planet and the longer between contacts with our native planet and ancestors, the weaker we become physically, energetically, and morally? What if this home planet is lost to us, and if we don’t find our way back to it . and reconnect, we will fall into a permanent Dark Age? What if twin “Star Children” are born every millennium to find the pathway across the galaxy? You get the idea … One of the tricks for me was to weave these two storylines together: the near-term urgency related to Earth and the moon, and the longer-term quest of crossing the
galaxy and saving humankind. The first storyline is basically science-fiction—colonizing the moon, with all its challenges—launched from a dystopian

Earth in the grip of a military dictatorship. The second storyline could also be hard science fiction, but I preferred to approach it through fantasy. I’m a sucker for magic and mystical possibilities, and so I embarked on this ambitious journey to combine science-fiction and fantasy. I am currently working on Book Two, “Light Fighters,” and although I finished several drafts a few years ago, I am about to blow it up again and take a new, more urgent approach. We’ll see how that turns out. Wish me luck! “Moon Deeds” is available in paperback, e-book, and audiobook, wherever you get
your books online. Or, ask your bookstore or library to carry it (they can find it via
IngramSpark and all audiobook distributors)

It’s 2090: the last outpost of freedom is the moon, the best defense against technology is magic, and the only hope for humankind rests in the hands of the Star Children.

Twins Cassidy and Torr must save Earth from a ruthless enemy at a time when the only force more powerful than alien technology is magic. Moon Deeds launches the siblings’ journey across the galaxy, where they must learn their power as the Star Children, claim their shamanic heritage, and battle dark forces that threaten humankind.

The Star Children Saga follows Cassidy and Torr as they slowly awaken to their destiny as the twin Star Children, born every millennium to reconnect with the source of all life. They come to discover the sheer enormity of their task: to find our ancestors on a lost planet across the galaxy and save humanity from a spiraling descent into darkness. The powers they must wield to accomplish this task are truly frightening and put at risk everything they love.

Come along with 20-year-old twins Cassidy and Torr, who inherited deeds to land parcels on the moon. They want to use their moon deeds to get off Earth and escape a brutal dictatorship. But first they must unlock their shaman powers.

A rollicking yet poignant adventure in the not too distant future, when we have colonized the moon and nearly lost Earth to a dictatorship. Only the shamans remain free, plus the lucky ones who escaped to the moon.

About the Author – Palmer Pickering

Palmer has been writing fiction since she was eight. She received her BA in American Studies from Wesleyan University, with concentrations in Religion and Race Relations.

She currently works in Silicon Valley as an Innovation and Technology Manager for HP, Inc. In addition to her career in high tech, Palmer holds a certificate in Chinese Acupressure, is a certified solar panel installer, and studied Tibetan Buddhism with the 14th Dalai Lama.

She lives and writes in the magical redwood forest of the Santa Cruz Mountains, California, and travels back and forth to Nashville, Tennessee, where she dabbles in songwriting.