Why I recommend Titus Crow

Home » All Reviews » Why I recommend Titus Crow

Great series. I really recommend the audiobook versions most.

If you ever want to read some absolutely insane books who utterly disregard everything HP Lovecraft wrote in the same way that cyborg Sherlock Holmes punching out Cthulhu would with his hot mermaid Deep One bride and time-machine Death Star, then the Titus Crow series is definitely one I would recommend. 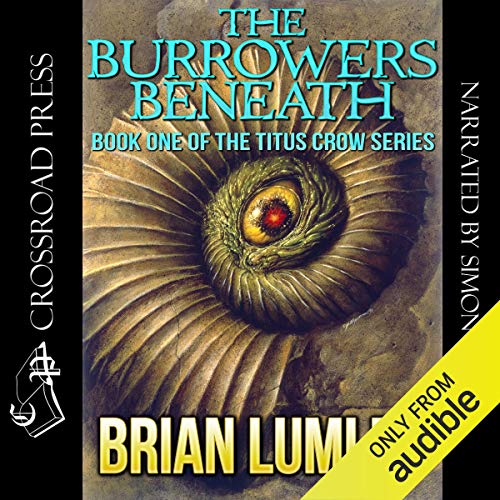 The books are basically a Call of Cthulhu game where the Keeper disagrees with every single principle of Cosmic Horror. Why shouldn’t humans be able to utterly kick the Cthulhu Mythos’ ass? Why shouldn’t half-Lovecraftian abominations be hot beautiful green skinned space babes? Why shouldn’t Cthulhu have a Yoda-esque good brother who is the ally of the protagonists? As well as one’s father in in law?

The books begin with THE BURROWERS BENEATH, where Titus Crow and his friend Henri de Marigny are investigating Lumley’s new creations, the Cthonians, who are the Sandworms of Dune except sentient as well as malevolent! This is actually the most normal of the books and it includes getting America to nuke their Great Old One boss monster.

THE TRANSITION OF TITUS CROW is where things go seventies acid trip where Titus Crow attempts to seek out the Elder Gods on their utopian home planet in his awesome TARDIS. Which is actually Randolph Carter’s clock-coffin that just so happens to be able to travel through time/space, is bigger on the inside, and has a planet-destroying laser.

The books gradually switch to Henri, the Watsonian sidekick, as HE becomes the master of the TARDIS and flies through the galaxy blowing up the Great Old Ones plots as well as meeting beautiful half-Great Old Ones (albeit in a proper gentlemanly courtship sort of way). THE CLOCK OF DREAMS including attempts to rescue Titus from the Dreamlands where that bastard, Nyarlathotep, has an army of vampires as well as werewolves among other dreams at his beck and call. Good to know we can call on sword and sorcery heroes to help us! We finish up our free-floating adventures with SPAWN OF THE WINDS and IN THE MOONS OF BOREA where things go full planetary romance. On Borea, the evil ice spirit Ithaqua is tormenting transplanted Native Americans and his demi-goddess daughter who fights for humanity. I’d say she was based on Storm from the X-men but I’m pretty sure she predates her. It’s up to an American cowboy and Henri to take the Wind Spirit and Cthulhu’s brother out! We also discover why Cthulhu and other Great Old Ones find humans so damn hot.

But Brian Lumley couldn’t leave our heroes purely triumphant. No, the Great Old Ones are risen and our heroes have discovered Elysia abandoned! Who will stop Cthulhu and his entire army from rising to destroy mankind? Well, it’s off to the Hyborian Age to pick up an evil wizard and getting into a fight with Yog-Sothoth to find out! ELYSIA is the final apocalyptic volume of an utterly batshit but fun series.

If you liked all these adventures, you might also enjoy THE COMPLEAT CROW (yes, it’s spelled correctly) that is a bunch of Crow short stories where our heroes handles more mundane adventures. By which I mean he takes on Mythos beastie after Mythos beastie to make them all cry with cosmic kung fu or logic puzzles.

Great series. I really recommend the audiobook versions most.