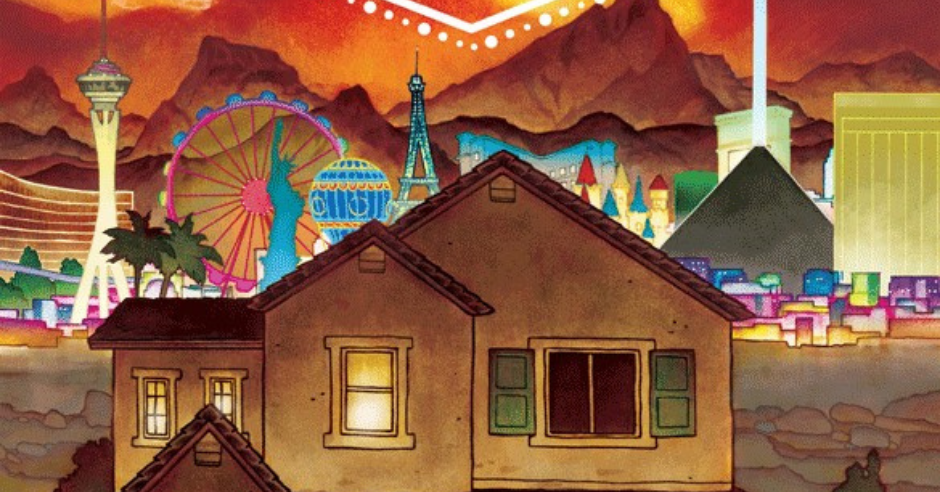 A Powerful Collection of Images for Healing 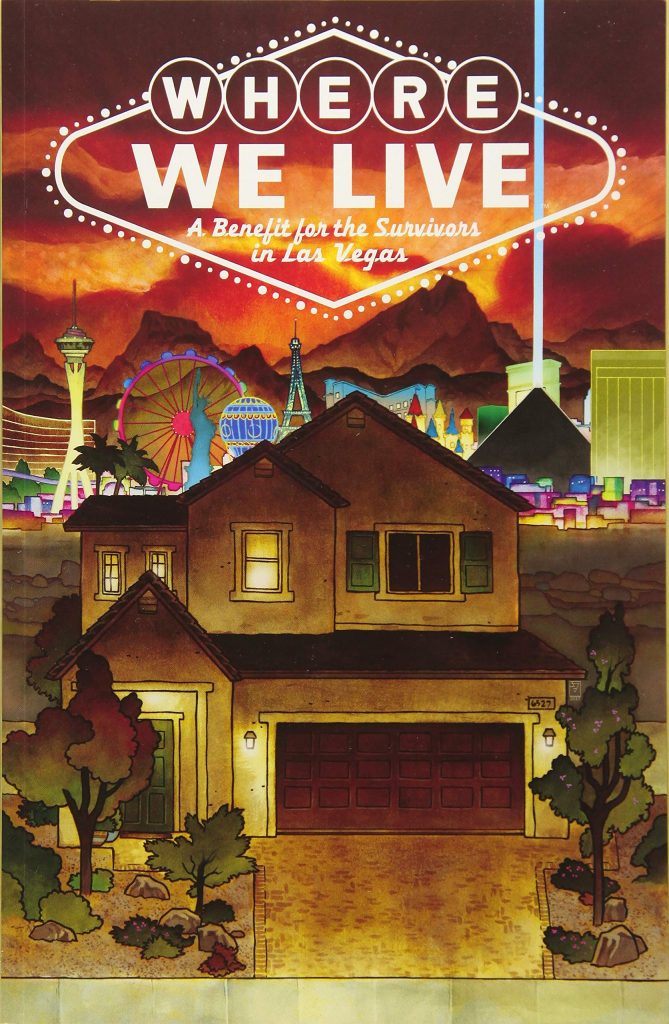 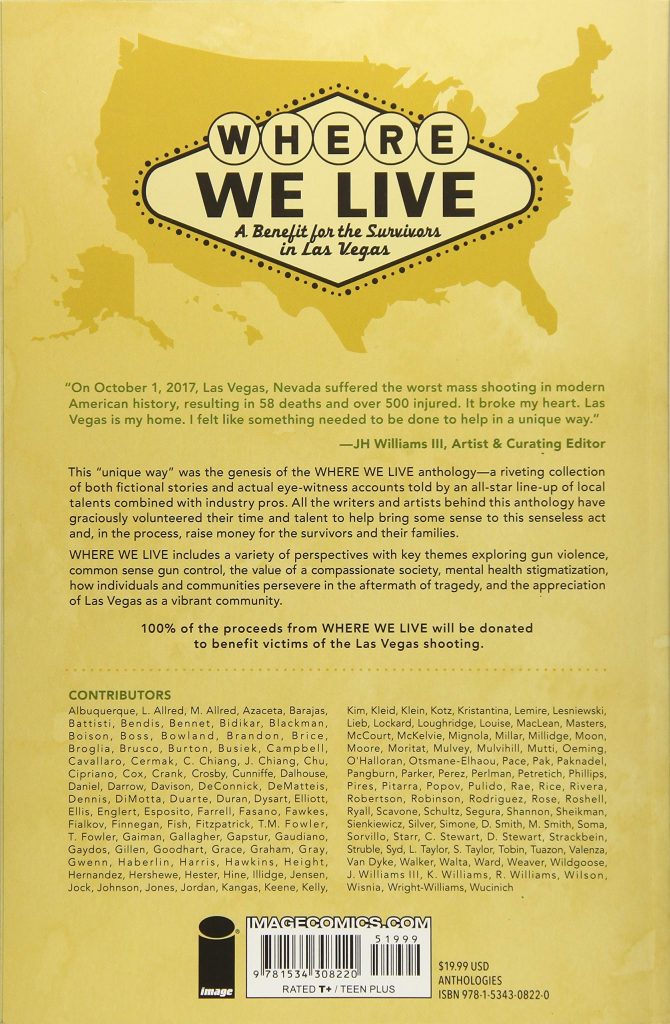 On October 1, 2017, Las Vegas, Nevada suffered the worst mass shooting in modern American history, resulting in 58 deaths and over 500 injured. It broke my heart. Las Vegas is my home. I felt like something needed to be done to help in a unique way. — JH Williams III, Artist & Curating Editor

This “unique way” was the genesis of the Where We Live anthology — a riveting collection of both fictional stories and actual eye-witness accounts told by an all-star line-up of the top talent working in comics today. All the creators have graciously volunteered their time and talent to help bring some sense to this senseless act and, in the process, raise money for the survivors and their families.

The book will include a variety of perspectives with key themes exploring gun violence, common sense gun control, the value of a compassionate society, mental health stigmatization, aftermath of tragedy and how individuals & communities persevere and an appreciation of Las Vegas as a vibrant community.

100% of the proceeds for the Where We Live anthology will be donated to an existing GoFundMe campaign for the survivors in Las Vegas.

As Author Michael Bendis wrote on the second page of this story, we all feel silent rage, and he felt like he did not have anything new to bring to the table. I don’t believe that. I think that each of us, including Michael, in our own ways, are whacked out and off-kilter. It is as if we citizens of the United States are treading water and a giant dark wave wants to crush us. Violence once thought to be the thing of movies and TV, is all about us. But, we as a society are sold the idea that the violence is happening somewhere else, not here. Not at a country music concert. Suspicious theories, no better than the “whisper game” from childhood, tell us our news. The news that is vetted and manipulated to want to tear us along party lines not since seen since the civil war. Those Blues and Those Reds.

The thought that this book even exists makes me want to tear at my hair and bruise my fists on the walls. I want to take my sweet five-year-old child and hide her away in a bunker, teach her training, martial arts, and never to have her leave home without body armor. I wish I were kidding. But violence killed a class of adorable five years old kids that just wanted to talk about barney and Winnie the pooh. They are the personification of innocence. It is insane.

Are you still with me here? I promise to get to the bits about the book and why it is so damn important to me.

I AM LAS VEGAS NATIVE.

I didn’t just live there like so many Cali transplants coming for cheaper homes. I grew up and ran through the deserts of lizards, jackrabbits, and Joshua Trees. Trees that look like a spikey alien reaching for the heavens only to feel a loss at being anchored to the burning sand. I was there when strip signs fell, water-filled up hotels, hotels raised to the sky as glittering monstrosities, and came crashing down reduced to nothing – nothing but ghosts. Vegas courses through my blood as much as blood cells do. Vegas is a glittery and dirty myth for some, but for me, Vegas will always be a four-letter word – home. I got married in Liberace’s house – I am as Vegas as they come.

I think because of my personal connection to the subject matter, the entire experience reading it was more heartbreaking. This book broke me in places that I didn’t know had places. I currently live in Portland, but I remember learning about the shooting and frantically calling MY ENTIRE FAMILY. “Please don’t be there. Please don’t be there” I begged the portland sky. I was so far away and impotent in the face of all of this. They were not there, bless the gods, but some other friends worked in the Mandalay as security, I have friends working two hotels over dealing cards. My parents live one mile down the street next to Las Vegas Blvd. This night shattered me because it was the idea of home being blown apart by bullets.

Someone did that, and I am forever changed by it.

The book itself is good. Really good. It is a selection of events, memories, collections of ideas about the Las Vegas experience, and what it was to be there. Maybe I am biased because my sense of home and safety got blow apart by a motherfucker with a gun. So I might be viewing this story a little differently than other folks. But that is ok. Books and reading can be a very personal experience based on your moments from your past and visions of your future. For me, this story felt both homey; these are my people, and painful because of the topic. In terms of content, the book sways between illustrated accounts of the victim’s experiences during the shooting and calls to action for gun control. If these are two things affect you and you feel passionate about they can be very triggering. This book is not attempting to make a two-sided argument regarding guns, so don’t expect that. This book is for the victims and the violence has already happened, and this book talks about the aftermath.

Graphically it is beautiful. Each page is a new writer, style, opinion, and idea of what home is. It is a kaleidoscope of colors, darkness, light, and talent. I think people should read this to connect, even for the moment, with what happens after significant gun violence. Even if you are pro-gun, you can read appreciate this book as a collection of art pieces. Some of the images are that good.

Maybe it can help change the violent madness we walk as a society, maybe it can’t. But taken as a whole this is a very stirring work to read and maybe, just maybe, a little healing for those who have been directly affected by the violence. I wholeheartedly and sadly recommend it