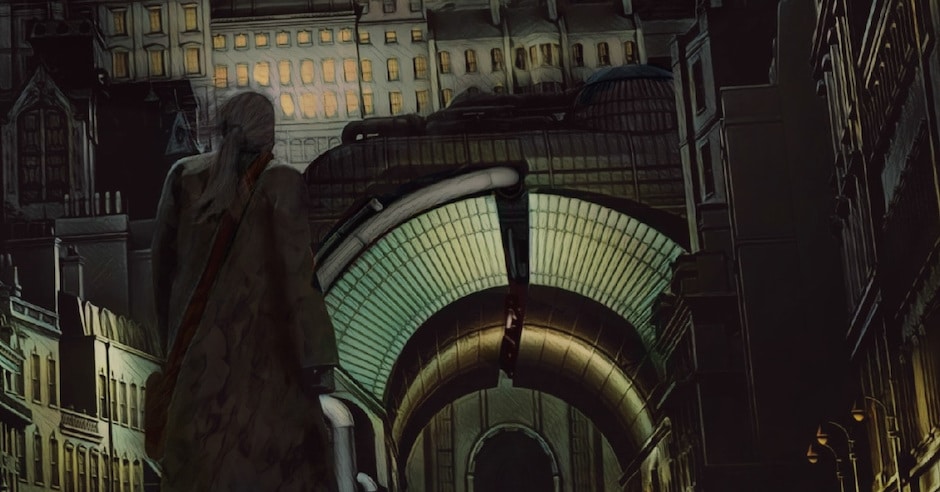 REVIEW – We Men of Ash and Shadow by H.L.Tinsley

WE MEN OF ASH AND SHADOW

REVIEW BY BEN FROM LITERATURE AND LOFI

"If the Peaky Blinders married the Fantasy genre this would certainly be the bizarre and extraordinary lovechild."

TRIGGER WARNING: This book references and features violence against women… Well general all round violence to plenty of characters really.
Dive into We Men Of Ash and Shadow, a fantasy novel by H.L Tinsley set in a grimdark world in an era reminiscent of the industrial revolution in Britain post world war one.
I have a weak spot for gang/crime stories (look no further than my love of Jade City and The Lies of Locke Lamora books) and I can proudly state that We Men of Ash and Shadow firmly stands alongside those reputable reads.
We follow John Vanguard, a soldier turned mercenary, who now hunts down criminals at the command of his employer, Felix Sanquain. Vanguard has extremely unique magical abilities that make him a tremendous asset to Sanquain’a corrupt imposition.
Vanguard’s latest task, leads him to uncover buried secrets when dire consequences. An encounter with the young Tarryn, a lad who also proves to possess similar abilities to Vanguard, will throw challenges towards John that he never would have foreseen coming.

He carries a lot of secrets and regrets from a very muddy and haunting past. Eventually John will be forced to face the spectres that haunt him and it is an absolute delight to follow. Picture Thomas Shelby, but even more complex and merciless. Vanguard carries this powerful presence that you won’t be able to ignore on the page.

But Vanguard isn’t the only character I find fleshed out and enjoyable to follow. Every single character in this book, no matter how minor, dominates with personality, complexities and presence that just jumps out of the book. Sanderson is a gruff stubborn thorn in Vanguard’s side, constantly challenging but balancing out our protagonists book.

Kosic, the giant this for hire with a conscience always brings us back to reality when ever he strides into the page. Carmen was a character who grounded me and always brought hope to the story. I loved her back and forth banter with Vanguard. And we can’t forget Henriett, the reliable woman who is a fantastic twist on the stereotypical mistress of a whorehouse.

And then there’s Tarryn, whose character arc is nothing less than stunning. Tinsley did a mad amazing job setting up his pathway, leaving his storyline open to do many possibilities before ruthlessly deciding to plunge him into an arc which is so juicy and bursting with rich depth and development.
HAVE I SOLD YOU ON THE SERIES YET?
No? Okay!
The world feels so full and diverse from page one. Immediately it’s established that this is a grimdark world with a carefully considered amount of humour injected in there to add layers to the characters that inhabit and interact within this world.
Vanguard’s secrets and history had me hooked. I cannot learn enough about this protagonist. And while Tarryn and his backstory is compelling, Vanguard’s is just completely and utterly enthralling.

Expect, big drama, wavering loyalties and huge defining/enlightening character moments. These characters truly lead the story, with a plot that is equally as rich despite such big personalities at the forefront of this book.
The twists were very well executed with a climatic third act which explodes in pace, stakes and character development. I was so invested in the well-being of the characters, and even though some of them aren’t going to make (let’s face the fact that this isn’t a spoiler since we’re in a grimdark world) at least they get to go out true to their nature in a blaze of glory.

I don’t think a book has ever had me so entirely committed and in.

Holly, I’ll be watching you very closely for the release of the second installment.
Recommended for: Grimdark lovers (duh!) Fans of criminal/gang stories that focus on both the politics and the internal drama. People who love corruption arcs (and redemption). And of course, readers who love stellar character work.
You’ll love this book if you’ve read/watched:
Jade War. The Blade Itself. Lies of Locke Lamora. Foundryside. Peaky Blinders. Gangs of New York. Kings of Paradise.
The Final Verdict: 10 out of 10.

Hey the name's Benjamin from Literature & Lofi. You can find me posting weekly videos on my booktube channel or on Twitter shouting about my love for Dresden Files out into the void. Reading, reviewing and recording is something I love to do in my free time which is steadily requiring more and more caffeine as the channel builds momentum. My passion for the fantasy genre was reignited a couple years ago. Now I'm trying to make up for lost time by reading some of the big household names, while also advocating for indie/SelfPub books. (A section of the SFF community that is growing rapidly). My goal is to spark constructive discussions within the reading community. I try to be a positive reviewer, looking for the strengths in books and critically considering who they are perfect for. Recently I've gained an interest in urban fantasy and the next year will entail me diving much deeper into that sub-genre. My guilty pleasure is reading romantic fantasy. I'm also beginning to dip my toes into grimdark. Champion of #IndieAugust Creator of #FebruarySheWrote