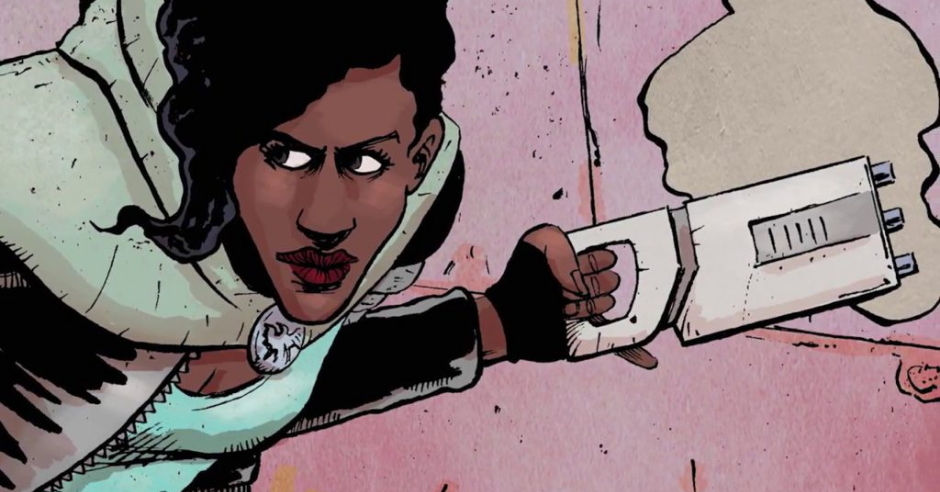 Former child queen Elida was driven from her throne at age ten and forced to wander the galaxy, evading the revolutionary forces that wanted her dead. When an old frenemy claims to know the whereabouts of Elida’s long-lost mother, she is forced to return to her former kingdom and stage a rescue.

Vagrant Queen isn’t Firefly, and it isn’t trying to be. But it has bits and pieces of what made Firefly so beloved. This story is a straight-up space opera complete with quipping protagonist and smart and scheming “second in command”(he isn’t second yet – but you get the vibe). I love stories like this. Space opera is the guilty pleasure of the sci/fi loving crowd. Action, sex, humor, and excitement all rolled into a little sci/fi package. If Space Opera were a food, it would be a glazed donut.

At least that is how I think about it. It doesn’t mean that space opera doesn’t have literary value or merit, quite the opposite. Star Wars is a space opera and where would we be without that. It’s just a genre type like anything else.

There are a few things (according to wikipedia) that define what a space opera is. I am going to relate a few of them back to Vagrant Queen.

“Colorful” – This story is colorful, both in dialog and commentary as well as the cast of characters. They add a great richness to the story. Multi-humanoid races are represented as well a smattering of alien races. It all makes for a rich stew of characters.

“Dramatic” – “Former child queen Elida was driven from her throne at age ten and forced to wander the galaxy, evading the revolutionary forces that wanted her dead.” Does this not sound like high drama to you?

“Competently and sometimes beautifully written” – This is excellently written. I enjoyed Elida quite a bit. She had a definite Han Solo/Malcolm Reynolds vibe to her. Being that I am a ride or die Firefly fan this appealed to me.

“Usually focused on a sympathetic heroic central character and plot action” –  Elida is a sympathetic character without appearing weak. She can’t be weak; everyone is coming to get her. She needs to be wily, strong and intelligent – and she is. It is such a refreshing thing to see in graphic novels. Elida needs no one to save her; she can save her damn self.

“Characteristically optimistic in tone” – This isn’t a dystopia. The narrative of the story is not about the overarching problems of society and how they relate to Elida. It is about how Elida is going to escape past gunships that are blocking her way.

“Large stakes” – Elida is a former child queen being chased across the galaxy. The stakes are high.

See you should read this! Action, adventure, power struggles, history, it is all here. Is it perfect? Not yet. The story just started and the writing and art are getting their proverbial feet under them. But it has a ton of promise.

Review – Eyes of the Dragon by Stephen King

About the Author – Magdalene Visaggio

Magdalene Visaggio is a comics writer and essayist. She’s the writer and creator of the GLAAD and Eisner-nominated series Kim & Kim, as well as Eternity Girl at DC Comics. She currently resides in Manhattan.