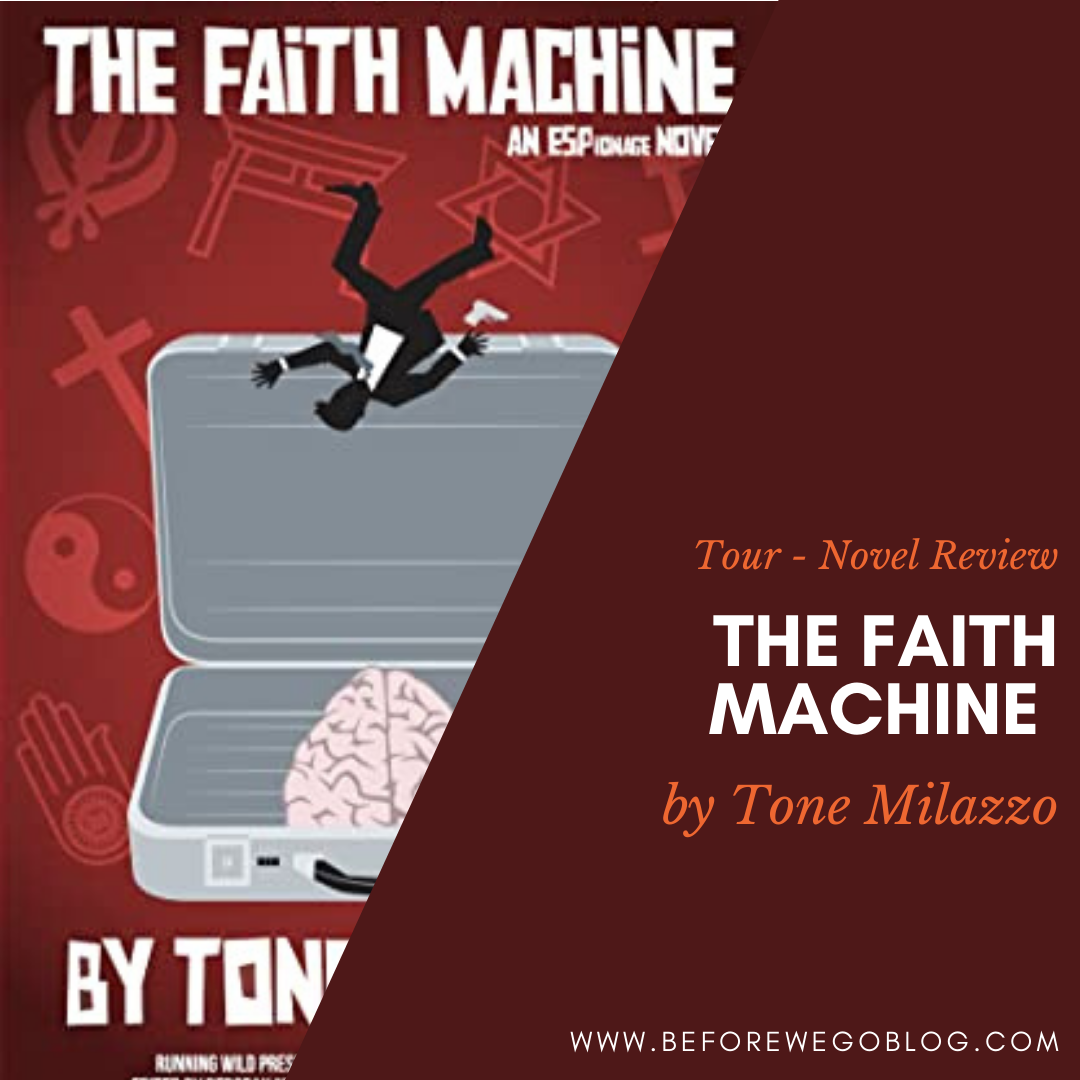 Tour – The Faith Machine An ESPionage Novel by Tone MIlazzo

Psychics Trying to Save the World

The Faith Machine – An ESPionage Novel

Doctor Ken Park is the Korean-American field commander of Project Dead Blind, six psychic agents called ‘Cards.’ In the secret world of psychic espionage, possessing these powers means a lifetime spent resisting corruption and dodging assassination. Park finds himself in over his head when the team is sent to Africa to recover the Faith Machine, a Soviet psychotronic device that turns prayers into suffering.
A fantastic niche, psychic espionage. Think Legion season one meets The Men Who Stare at Goats, or the X-Men in the X-Files. A must-read for anyone who loves a good laugh, a great read, and implausible but completely engaging characters.

The Faith Machine by Tone Milazzo is a weird and wild combination of action and psychic “superheroes” fighting for the fate of the world.

We are in a world where The Avengers and other superhero juggernaut stories have become as familiar to readers and viewers as peanut butter and jelly. The stories have infiltrated our everyday vernacular and changed the superhero trope. A being with powers can no longer be a nuanced and profound thing. You have to wear spandex and a cape, possibly have a catchphrase of 12. Bad guys are always wrong to the core, and the good guys kiss babies and help older people across the street. Although this is entertaining in a grand “Boom,” “Pow!,” “Ka-Pow” sort of way, it doesn’t leave much for actual feelings. I don’t see superman ever dealing with apathy, depression, mania, or desperation.

All of this leads me to my newest read, The Faith Machine by Tone Milazzo. The Faith Machine is a new breed of Superheroesque story that is part noir, part thriller, part action and, part science fiction. Unlike many of the trope-filled superhero stories mentioned above that are a part of mainstream culture, The Faith Machine steps outside the box a bit. It reminds me more of a gonzo Watchman then anything having to do with superman. People with powers have double the problems. They are human, and with that comes all of the quirky human characteristics that swirl round in their monkey brains, including mental illness. God or something caused these people to be gifted, but all gifts have a price. It can be life-destroying or life-affirming. But in the end, these characters have a realness that most superhero stories do not have.

The seven of us are some of the most powerful individuals on the planet. We’re demigods among men.―

The Faith Machine has a huge cast of quirky characters. Occasionally, it was difficult to tell what was going on. But author Tone Mizolli kept his chapters brief, didn’t use much exposition, and allows the actions, descriptions of thoughts help differentiate the characters. The story, in a nutshell, is difficult to describe accurately. “Welcome to the dangerous, clandestine world of ESPionage. Welcome to The Strip, where operatives on the fringe command teams of ‘Cards’: Agents cursed with subtle, specialized, and sometimes sloppy psychic powers. Dr. Ken Park, Korean-American psychologist, and spy dares to lead six of these Cards. Together, they tackle esoteric threats the Department of Homeland Security cannot.” This description makes it sound like a psychic A-Team. It isn’t, it is a much cooler story than that. “Park takes his team to Africa to retrieve the Faith Machine. Built by the Soviets to turn prayers into suffering, the psychotronic device fell into the hands of a demented warlord. Tragically, the mission fails, and the madman slaughters hundreds of innocents while the machine burns.

They return to the States in disgrace, and into an ambush by the mysterious and brutal Casemen. Cut off from command and each other; the scattered agents rush to their safe house in the west. While spy agencies from around the world want retribution for the catastrophe in Africa. Park’s team outplays enemies left and right, while uncovering the true threat. There’s another Faith Machine, one destined to bring hell on earth.” The team takes on a mission that was a bit too much. They come back to the states only to be attacked by a group called Casemen. It is time to run. They are running most of the novel, and that can be tiring for some readers. But I rather enjoyed the non-stop action. As for what happens next, I am not going to ruin anything. But know there is destruction, and the nature of God and faith.

Or something, it is a bit wild.

It is a great read. I enjoyed the characters, the plot, and the action. It isn’t a book I would usually have picked up, but I am delighted that I did.

San Diego writer of speculative fiction in prose and comics. Author of the YA urban fantasy Picking Up the Ghost, the upcoming E.S.P. and espionage novel The Faith Machine, the upcoming graphic novel Dead Woman and the upcoming RPG ESPionage. Everything’s upcoming up Milhouse.

Open to freelance work punching up stories or homepages, script-doctoring, beta reads, or other opinion vendings.

Stories have been with us since the first hunter told another about the one who got away. Stories are what make us human. Stories lead to understanding. Stories are cooked. Fiction, religion, biographies, gossip, gaming, and history it all goes into the pot and out comes as fiction. To those ends I’ve been around, professionally speaking. Marine, taxi driver, teacher, scientist, and coder. This breath of experience has given me a little knowledge about a lot of things, good and bad.

A good story reaches beyond the scope of its words.