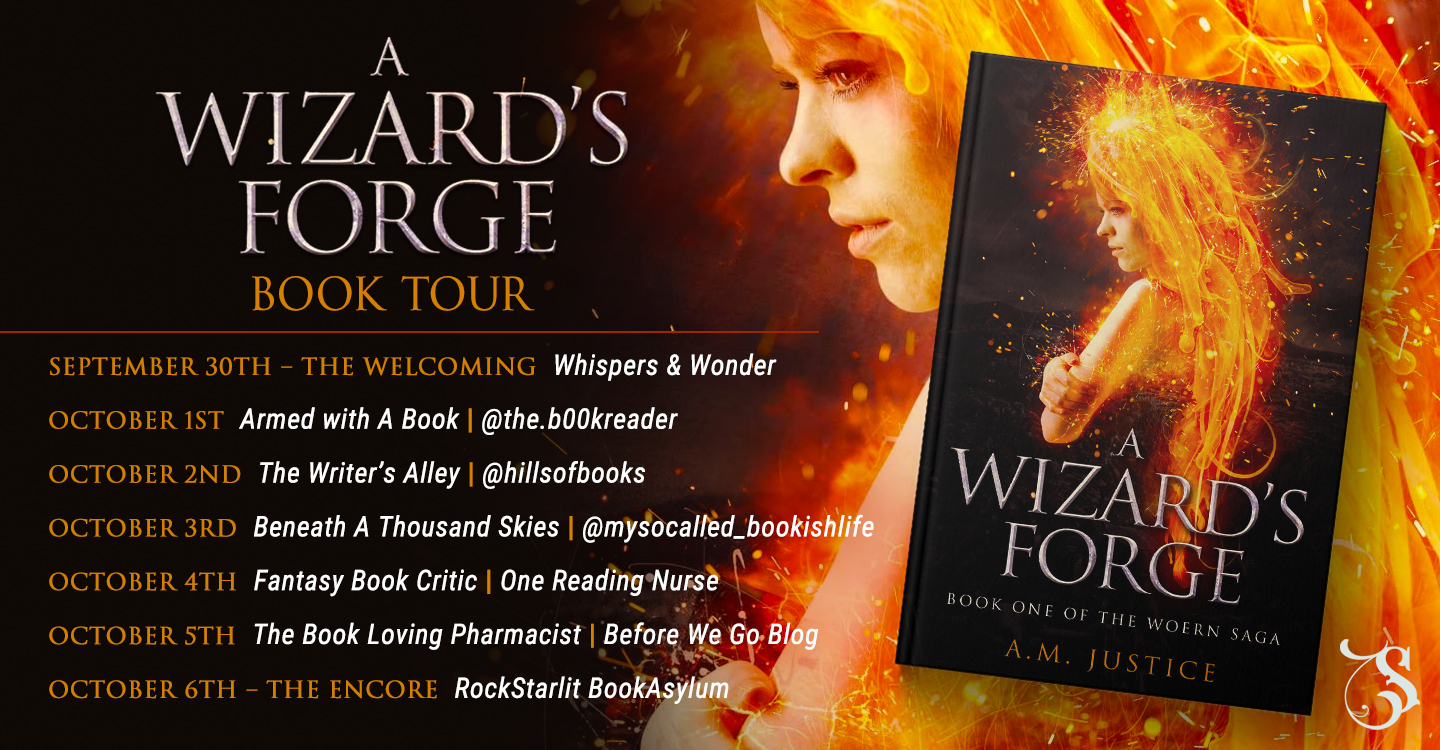 Tour – Interview With A.M. Justice, Author of A Wizard’s Forge

A.M Justice – “A Wizard’s Forge evolved into its present form over many years. However, anyone who has read Anne McCaffrey’s Pern books will see a lot of parallels between the world of Knownearth and the world of Pern.”

A Wizard’s Forge by Author A.M. Justice explains how she finds inspiration, what kind of character is Vic, and the belief systems in A Wizard’s Forge.

BWGB: Who or what are your inspirations when it comes to writing? Is it a particular author or authors, art, history, culture, current events, something else? How have they influenced your work?

I’d say all of the above. I find inspiration from many aspects of life, from a news item to a catastrophic event to the simple observation of how human beings behave. Every story is different. For instance, I happened across a random segment of a Discovery Channel show about sword swallowers and how they physically manage their craft, and it led to a short story called “The Price” about an ex-pirate who makes his living as a performer in a traveling theater troupe. Dava Sobel’s biography Galileo’s Daughter, about the famous philosopher’s eldest child, Sister Maria Celeste, inspired an unfinished novel set during Galileo’s lifetime. The show Downton Abbey and the film version of The Remains of the Day served as inspiration for a fantasy story called “The Remains of the Spell,” which is about the housekeeper to a sorceress. Finally, my short story “Kill Squad,” which is a prequel to the two Woern Saga novels, draws inspiration from various historical genocides. It’s written from the perspective of a perpetrator and focuses on the things people carrying out mass murder must tell themselves to justify their cause.

BWGB: Could you tell me about what inspired you to write Wizard’s Forge? Was there a spark of a single idea, or was it a culmination of many things coming together?

A Wizard’s Forge evolved into its present form over many years. However, anyone who has read Anne McCaffrey’s Pern books will see a lot of parallels between the world of Knownearth and the world of Pern. Both planets harbor lost space colonies, where the world’s human inhabitants have lost touch with Earth and many don’t even know they are descendants of marooned space travelers. There are also a lot of similarities between Vic and Lessa, the protagonist of Dragonflight (the first Pern book) as both women suffered a traumatic experience at a young age, and they spend the respective first books in the series growing into their power.

BWGB: You have utilized some unique belief systems in the novel. Could you tell me a little about them?

I’m fascinated by the belief systems humans create to help them explain the vagaries of life and the natural world, and I also have always been intrigued by the debate in our own society about whether the words of the Bible should be taken literally or figuratively. I decided to have some fun with that idea and created two societies that revered the same documents that described human origins, which in this case are the ship’s logs of the spacecraft that brought humans to the world of Knownearth. Vic grew up believing in the literal truth of these documents and early in her life was a scholar dedicated to preserving the Logs without interpreting them in any way. Meanwhile Ashel’s people think the idea of space travel is absurd, so of course the Logs must be religious parables, and his mission as a scholar of the Logs is to find the spiritual meaning hidden in these ancient writings. While Vic and her people believe humans and most of their crops and livestock came from Earth via a spacecraft with the registry LSNDR2237, Ashel and his people believe the god Elesendar descended from heaven and mated with cerrenils, a species of sentient tree, to beget humanity. There’s a short passage in A Wizard’s Sacrifice where the pair argue over these details:

“What about the Elesendar’s technical specifications?” Vic asked as they squeezed through a gap in the underbrush. “What scriptural meaning can you possibly glean from a manual on touchscreen maintenance?”

“The Logs are full of mysteries,” Ashel replied sagely. “Do you know what a touchscreen is?”

“It’s a glass plate you use to control the ship’s functions.”

“By touch. Very mystical and mysterious.”

“The real mystery is how you people can believe we came from trees. What about cats and horses and cows? The mammals on this world are nothing like any other animal. Where did they come from? Did Elesendar mate with a bush?”

BWGB: What kind of character is Vic? How would you describe her?

Vic is a rather arrogant and very smart young woman who is hard, even brittle, on the outside, and extremely fragile on the inside. She has a very traumatic experience as a teenager and afterward has to rebuild herself—forge herself, in the metaphor of the book—into a woman of power.

BWGB: You write very candidly about mental illness in your book and the effects of it. Did you research mental illnesses in preparation for the book?

I didn’t do a lot of formal research before I wrote the novel. Instead, I just followed what was to me a logical path of action and reaction in terms of Vic’s emotional journey and her difficulties overcoming past trauma. While I was writing it, however, I did research Stockholm syndrome and trauma bonding. The latter is particularly relevant to Vic’s experience, where a captor or abuser alternates abuse with kindness and affection in an effort to break down the victim’s will and secure their loyalty. Vic escapes before the process is complete, which allows her to begin remaking herself, but which also prevents her from forming healthy romantic relationships.

BWGB: There is a definite science fiction base for the story. Are you a fan of science fiction? Are there any stories in the genre that affected you as a reader?

Science fantasy—the term of art for a blend of science fiction and fantasy—is the Reese’s peanut butter cup of speculative fiction, and it’s my favorite kind. I love finding hints of science fiction in fantasy (as in McCaffrey’s Pern books), or fantasy in my science fiction (as in Frank Herbert’s Dune). My favorite thing about the Star Wars universe is the idea that a Jedi’s powers are due to midi-chlorians and thus there’s a biological rather than a mystical basis for them (which is similar to the Woern). Another favorite examples of a story that bridges the science fiction and fantasy gap is Avatar, where Grace explains that the Navi deity Ewah is actually a neural net that connects all life on that particular planet.

BWGB: What is the publishing process like for you?

For the Woern Saga books I’ve relied on the team at Wise Ink, a publishing services company. They have connected me with Steven Meyer-Rassow, who designed the glorious covers and interiors for A Wizard’s Forge and A Wizard’s Sacrifice, and Amanda Rutter, the fabulous editor for both books. Plus with Sacrifice, I was able to move very quickly with the same narrator I used for the Forge audiobook, Leah Casey. She was able to record the book while the page proofs were being laid out and corrected, and I’m pleased to say the audio version should be available by the end of October.

BWGB: What does your daily writing process look like? Do you schedule time every day?

I work as a freelance writer in the healthcare industry, so technically I do write every day. However, I’m not the most disciplined fiction writer. I will go through periods where I’ll be working very furiously on a project on a daily basis—sometimes at the expense of my day job work—and then slack off as the demands of work and life kick in.

BWGB: What comes first, the characters or the plot? Or do you start with the world and work inwards?

Characters always come first with me, followed by plot, then the world. For me, world building is and should be done on a need to know basis—this is my feeling as a writer and as a reader. I know too many writers that spend all their time world building and never get round to actually writing a story, whereas others do have a story to tell but overload the reader with information on minute details of the world that have little or no bearing on the plot. Don’t get me wrong—I love digging into the lore of a world if I already know and love stories set there. I’ve read The Silmarillion more times than I’ve read Lord of the Rings. But when I am just dipping my toe into a new world, the first thing I want to know are the people who live there and their stories.

BWGB: Do current events affect your writing, or do you try and keep life and your stories separate?

I don’t go out of my way to make allegorical stories, where current events are mirrored in my fantasy worlds. However, I don’t know how a writer could keep life and their work completely separate. Just keeping characters real requires drawing from real life, even if it’s just basing your characters and their behavior on the people you know. Also, there are patterns of human behavior that repeat themselves over and over historically, and so it’s natural for themes like racial unrest or rebellion or invasion, etc, to play out in the stories we write. People may see a lot of parallels to current events in A Wizard’s Sacrifice, which has one plotline involving an environmental catastrophe and another centered around urban civil unrest.

Check Out Some Other Reviews From the Tour

Beneath a Thousand Skies

I’m a Brooklyn-based author, lover of science and wit, sporadic scuba diver, and once and future tango dancer. My characters live only in my head, but they’re real, and I put them through hell.

Interview – S.C Gowland, Author of The Souls’ Abyss: Book One – The Dark Crown