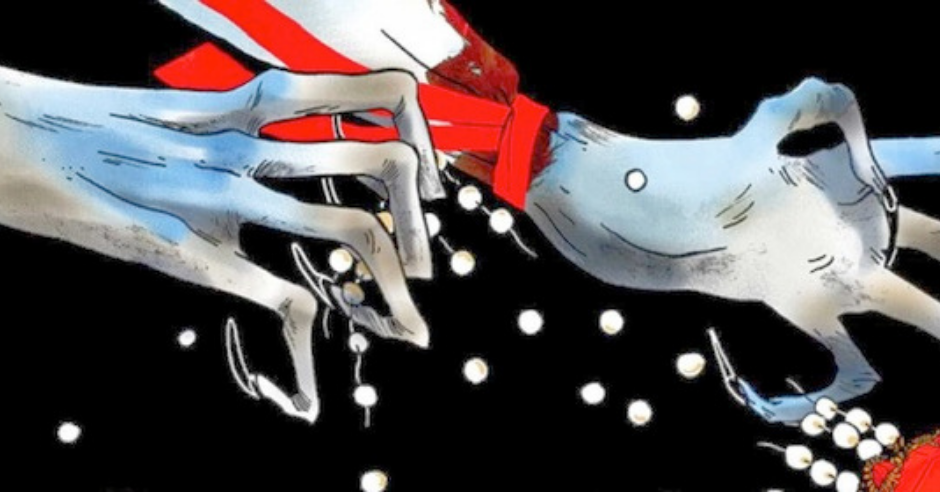 Graphic Novel Review of “Through the Woods” by Emily Carroll

From the publisher, “‘It came from the woods. Most strange things do.’

Five mysterious, spine-tingling stories follow journeys into (and out of?) the eerie abyss.

These chilling tales spring from the macabre imagination of acclaimed and award-winning comic creator Emily Carroll.

This book is a collection of five gothic horror scary stories beautifully illustrated. Each of them in one way or another is about the horrors that exist inside of a person, and the horrors we cannot see that are lurking for us in the dark whether literally or figuratively.

Our Neighbor’s House – This is the story of three pioneer girls: Mary, Beth, and Hannah waiting for their father to come back from a hunting trip. When he doesn’t come back after three days, instead of heading off to the neighbor’s house as they were instructed they sit and wait. A mysterious stranger starts coming to the door. He is full of smiles with a wide-brimmed hat, and one by one the sisters are charmed away. He is stealing the children away much like the pied piper.

This is a slow burn of a horror story, in the beginning, it seems innocuous enough that a man, maybe a neighbor, comes to the door and offers reassurance to the girls. One by one though, as they disappear into the night, you know something is wrong with the man. Until finally, there is no one left at all and he is, in fact, not a man.

A Lady’s Hands Are Cold – To me, this is the most Gothic of tales in the collection and probably my least favorite. It is the story of a young lady married off to a Man in a large white manor. From the first night onward the lady would hear a moaning wail coming from somewhere in the house decrying “I married my love in the springtime, but by summer he’s locked me away. He murdered me dead in autumn, and by winter I was naught but decay. It’s cold where I am and so lonely…”

Every night the wailing would get louder as if it was coming from the houses very bones. When the young lady could not take it anymore, she took a hatchet and began to hack at the house. Inside the walls and floor of the house, she found the decaying body parts of a woman and eventually the head which sang an awful lament. The young girl pieced the body back together holding it fast with red ribbons where it rose up and proclaimed, “Do you think he loves you know? Think you usurped my role? When I’ve torn you to pieces, girl then I’ll be whole.”

His Face All Red – This is a story of two brothers, one charismatic and loved while the other always lived in the first one’s shadow. One day while hunting for the mysterious beast that had been plaguing their village, the brother who still lived in the shadow killed the charismatic one and buried him in the woods. The shadowed one returns to the town with naught but a bloody scrap of his brother’s clothing proclaiming “I have killed the monster. I have avenged my brother.” Then the brother returns…but his brother is not actually his brother.

This story leans heavily on ambiguity to produce the necessary ambiance for a Gothic tale of this type much like the previous story. What the reader doesn’t know is the chilling part of the story. Again, I felt like this story fell flat. To me, the story moved to quickly to really produce the necessary environment for me to be scared.

My Friend Janna – This is a story about two girls who say that they can commune with the dead, but it is a hoax. Two bored girls playing a prank on the malleable. What Janna’s friend does not tell her is that Janna is haunted. There is a spirit that surrounds her, and it slowly is taking over Janna eventually until Janna disappears entirely.

The Nesting Place – This is my favorite story of the bunch. It is the story of Bell, a young girl home visiting her brother and his new fiance. The horror part of this story is that Rebecca, the fiance, is not at all what she seems. There are worms, I will leave it at that.

I am a bit torn on this collection. It is evident that Emily Carroll is a skillful artist and writer. The graphics for this collection are beautiful and striking. But, the stories left me feeling flat. They seemed rushed and because they seem rushed the setting that Carroll creates doesn’t have the buildup necessary for it to be effective.

I wish it had worked for me, but it just didn’t. Not to say that it won’t work for you, this is a very beloved story collection. Give it a try! I am in the minority here when it comes to this story collection, let me know what you think!

Review of Daytripper by Fábio Moon and Gabriel Bá

My name is Emily Carroll, and I was born in June of 1983. I grew up in London (Ontario) but moved to Vancouver for work after graduating Sheridan College’s Classical Animation program. I have since moved back to Ontario and now live in Stratford with my wife, Kate Craig. We have a very large cat.