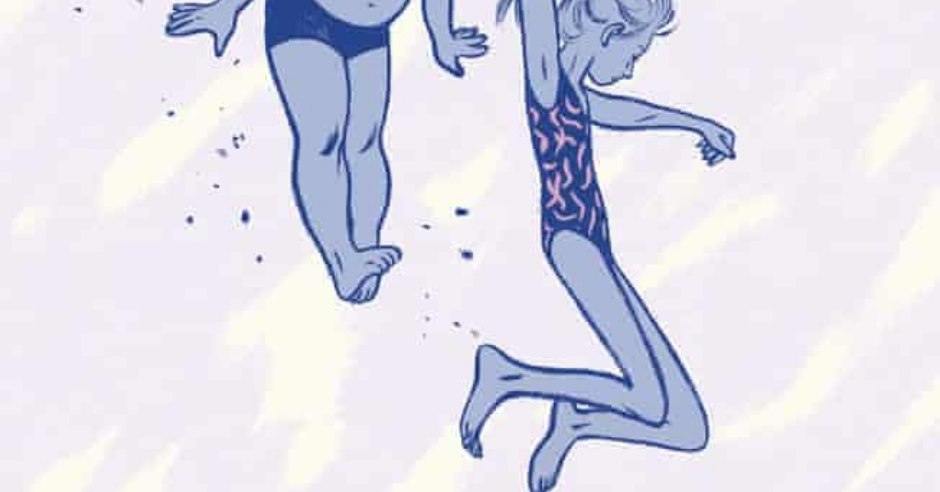 Childhood Moments Revisited in This One Summer, Book by Mariko Tamaki, Jillian Tamaki

From the publisher, “Every summer, Rose goes with her mom and dad to a lake house in Awago Beach. It’s their getaway, their refuge. Rosie’s friend Windy is always there, too, like the little sister she never had. But this summer is different. Rose’s mom and dad won’t stop fighting, and when Rose and Windy seek a distraction from the drama, they find themselves with a whole new set of problems. It’s a summer of secrets and sorrow and growing up, and it’s a good thing Rose and Windy have each other.

In This One Summer, two stellar creators redefine the teen graphic novel. Cousins Mariko and Jillian Tamaki, the team behind Skim, have collaborated on this gorgeous, heartbreaking, and ultimately hopeful story about a girl on the cusp of her teenage — a story of renewal and revelation.”

Two kids share a summer of moments at a lake house in Awago Beach. A yearly pastime that the family shares together. With each passing day, the pair discovers more adventures and become more aware of the fuming adult conflicts around them.

This book is a collection of smooth and quiet moments. For me when reading, not all moments have to jump off the page at you. Life isn’t like that, and neither should writing about life be. It is highs and lows, of which the author has written about so well. Also, Tamaki has walked a very delicate line, she has created a book that can easily be viewed from both sides of childhood divider.

Kids and teenagers can read this book and relate to the moments that Windy and Rose experience throughout a Summer: Scary movies, talking about boys, walking home at night through the scary dark, and swimming in the lake. All these moments are quintessential parts of a summer childhood experience.

However, simmering in the background are very adult-like issues such as pregnancy, inability to conceive, marriage dynamics, peer dynamics, anxiety, and depression. These issues touch Windy and Rose, and they react to them with a burgeoning adult understanding. Adults can read this story and read about these adult moments from a different lens and think back to what it would have been like to be at the age on the cusp of becoming an adult. It is very well written.

Graphically this book is beautiful. The characters are rendered with care and finesse, each panel delivering just enough information to show us a scene without falling into the trap of telling the reader everything.
This is a worthy award winner and should definitely be checked out. I Wholeheartedly recommend This One Summer.

If you would like to check out another great review on this book, check out Paul’s Picks.

Review  – Lamb The Gospel According to Biff, Christ’s Childhood Pal by Christopher Moore

I checked this out from the local library.

Mariko Tamaki is a Toronto writer, playwright, activist, and performer. She works and performs with fat activists Pretty Porky and Pissed Off and the theatre troupe TOA, whose recent play, A vs. B, was staged at the 2004 Rhubarb Festival at Buddies in Bad Times Theatre. Her well-received novel, Cover Me (McGilligan Books) was followed by a short fiction collection, True Lies: The Book of Bad Advice (Women’s Press). Mariko’s third book, FAKE ID, is due out in spring 2005.

Mariko Tamaki has performed her work across Canada and through the States, recently appearing at the Calgary Folkfest 2004, Vancouver Writer’s Festival 2003, Spatial III, and the Perpetual Motion/Girls Bite Back Tour, which circled through Ottawa, Montreal, Brooklyn, and Chicago. She has appeared widely on radio and television including First Person Singular on CBC radio and Imprint on TVO. Mariko Tamaki is currently attending York University working a Masters degree in Women’s Studies.

Hello! My name is Jillian Tamaki, and I am an illustrator and comics artist. I grew up in Calgary, Alberta, on the Canadian Prairies. ‘Went to school there too (the Alberta College of Art and Design). Currently, I live in Brooklyn, NY where I teach at the School of Visual Arts and carve out a living making comics and illustrations for magazines, newspapers, websites, and books. I have 2 books of personal work: Gilded Lilies (Conundrum, 2006) and Indoor Voice (D&Q, 2010). I also made a graphic novel with my cousin Mariko Tamaki called SKIM (Groundwood, 2008). My work was recently acquired by the Library of Congress.