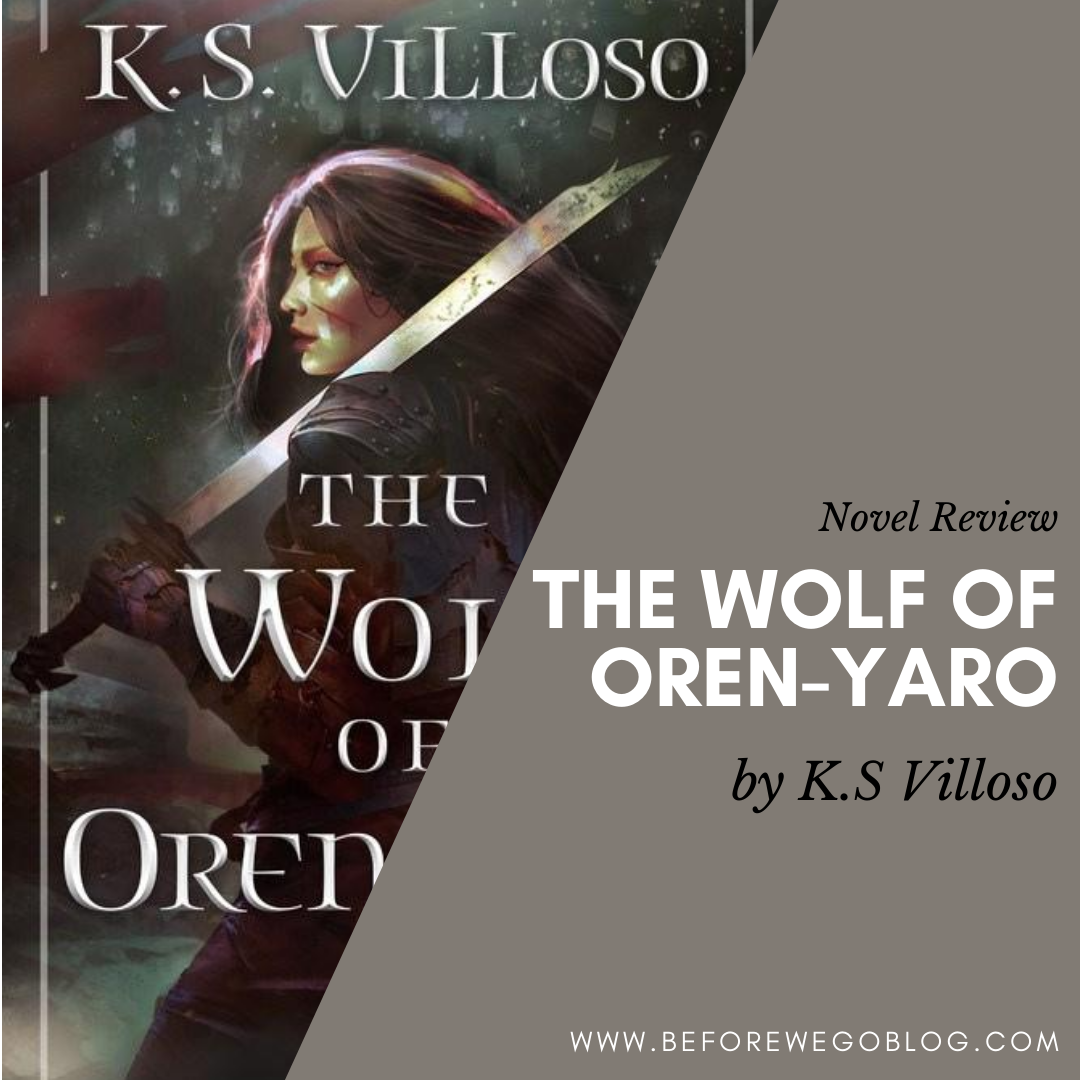 The Warrior Queen in The Wolf of Oren Yaro by K.S. Villoso

By Beth TablerJuly 31, 2020No Comments
Review

The Wolf of Oren-Yaro

Is heartless shrew on the menu?” Rai asked without batting an eye.―

K.S. Villoso, The Wolf of Oren-Yaro

A queen of a divided land must unite her people, even if they hate her, even if it means stopping a ruin that she helped create. A debut epic fantasy from an exciting new voice.

“I murdered a man and made my husband leave the night before they crowned me.”

Born under the crumbling towers of Oren-yaro, Queen Talyien was the shining jewel and legacy of the bloody War of the Wolves that nearly tore her nation apart. Her upcoming marriage to the son of her father’s rival heralds peaceful days to come.

But his sudden departure before their reign begins fractures the kingdom beyond repair.

Years later, Talyien receives a message, urging her to attend a meeting across the sea. It’s meant to be an effort at reconciliation, but an assassination attempt leaves the queen stranded and desperate to survive in a dangerous land. With no idea who she can trust, she’s on her own as she struggles to fight her way home.

Bitch, Queen, whore, warrior, wife, and mother: In The Wolf of Oren-Yaro by K.S. Villoso, Talyien aren dar Orenar is all of these and so much more.

K.S Villoso’s debut novel and the first novel of the Chronicles of the Bitch Queen series introduces us to the protagonist and all-around badass Talyien. Talyien is the Queen. Her longtime betrothed, Rayyel, the Ikessar heir, whom she married to unite the warring clans of her homeland, has left her and disappeared. Now she bears the burden of monarchy solely. Alone and facing warlords who would love to see her fail and take her throne from her, Tali must survive and hold her country together.

Five years have passed since Rae left; Talyien has struggled and fought to hold her homeland together. It is a battle every day to keep the predators of rival clan warlords away from her and her young son. Taylien receives a letter from Rayyel out of nowhere. He asks if they can meet. Taylien is hoping for reconciliation for the sake of the ruling throne. She quietly sets out for this clandestine meeting, leaving her young son behind in the care of family members.

“Even after I became Queen, the rumors continued. I was powerless to stop them. I should have been more, they said. More feminine. Subtle, the sort of woman who could hide my jibes behind a well-timed titter. I could have taken the womanly arts, learned to write poetry or brew a decent cup of tea or embroider something that didn’t have my blood on it, and found ways to better please my man. Instead, Rayyel Ikessar would rather throw away the title of Dragonlord, king of Jin-Sayeng, than stay married to me.”

What transpires on this journey to this meeting and afterward is exciting and chaotic. Assassination attempts, kidnapping, fights, and great characters, Tali is in a foreign land with foreign adversaries pulling strings behind the scenes. She doesn’t understand much of the language or customs, and after the assassination attempt, Tali is alone.

She has to survive on her wits and wiles.

One of Villoso’s strengths is her ability to set a scene. The lighting, the sky, the food: she covers it all and paints with the world with a colorful brush. You can practically feel what her characters are wandering through. Especially the food, I happen to think that food is one of the driving forces behind understanding a culture. It is central to gathering and feasting, it is the most important thing and can denote great fortune. Adding in descriptions of the sumptuousness of one lands cuisine versus the bland nature of another can help a reader understand the cultures better.

“They called me “bitch,” the she-wolf because I murdered a man and made my husband leave the night before they crowned me.”

Coupled with the worldbuilding, The Wolf of Oren-Yaro is a tremendous character-driven narrative. At no point in the story did I not know who Talyien aren dar Orenar was a person. Same for the characters around her. I might not have known all their motives and trickery, but I got a good sense of who they were as people. For instance, Talyien is a character that is weary of her duties, but she is duty-bound and honorable down to the core of her soul. She is hard on the outside. That is necessary and fitting for her survival as Queen, but inside she is somewhat naive. Rayyel, her would-be king, is charming and scholarly. We see the descriptions of who Rayyel is through the eyes of Talyien, as the story progresses and changes, her perceptions of him change and mature.

The pacing of this story does not stop. We are moving moment to moment, fight scene to fight scene constantly. It does not get overwhelming, but this is an intense story. There are moments of introspection, moments to take our breath, but they are so brief that it is almost as if they didn’t happen. I think that is a tool that Villoso is utilizing to show how quickly this story is evolving. There isn’t much introspection because there is no time for meditation. We have murdering and spying to do.

“Perhaps, when you love less, it is easier not to let the emptiness become a cavern from which you could no longer see the sun.”

Betrayal has a funny way of turning your world upside-down. As familiar as I had already been with it by that point, it still amazed me how far I could stretch that moment of denial. The thought of what had been—of what could yet be—persisted. Perhaps it is not the same for most people. Perhaps, when you love less, it is easier not to let the emptiness become a cavern from which you could no longer see the sun.

K.S Villoso, The Wolf of Oren-Yaro

One of the excellent character dynamics of the story is between Tali and Khine. Khine is a swindler con-artist that assists Tali at the beginning of the book when she got separated from her group. Nothing is free, and Tali had to help Khine with the swindling of a mark. She does so, and a great friendship is born. Their scenes, even though most often took place while fighting or running, added a light levity and banter to the story.

A few times, I was even chanting Team Khine and screw Rae.

Overall, The Wolf of Oren-Yaro has been one hell of a fun ride. It is emotional, full of danger, loyalty, betrayal. It had plot twists, twists on twists, and for once, a kick-ass female character that was also a mom. All of this combined with an energetic and emotional group of characters that you become invested in rather early, and you have one thrill-ride of a novel. I highly recommend it, and I can’t wait for the next one.

I received a copy of this copy from the publicist and Netgalley in exchange for an open and honest review.

K.S. Villoso was born in a dank hospital on an afternoon in Albay, Philippines, and things have generally been okay since then. After spending most of her childhood in a slum area in Taguig (where she dodged death-defying traffic, ate questionable food, and fell into open-pit sewers more often than one ought to), she and her family immigrated to Vancouver, Canada, where they spent the better part of two decades trying to chase the North American Dream. She is now living amidst the forest and mountains with her family, children, and dogs in Anmore, BC.