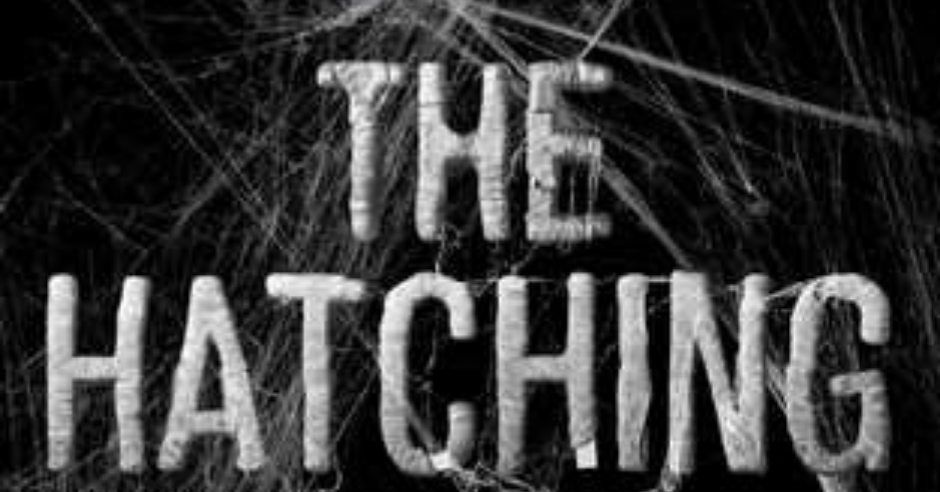 In The Hatching by Ezekiel Boone, Watch Out for The Tittering, The Bitting, and The Skittering

From the publisher, “Deep in the jungle of Peru, where so much remains unknown, a black, skittering mass devours an American tourist whole. Thousands of miles away, an FBI agent investigates a fatal plane crash in Minneapolis and makes a gruesome discovery.

Unusual seismic patterns register in a Kanpur, India earthquake lab, confounding the scientists there. During the same week, the Chinese government “accidentally” drops a nuclear bomb in an isolated region of its own country. As these incidents begin to sweep the globe, a mysterious package from South America arrives at a Washington, D.C. laboratory. Something wants out.

The world is on the brink of an apocalyptic disaster. An ancient species, long dormant, is now very much awake. “

Uh. Jesus, God no. No seriously, think about taking humanity’s worst fears and shoving them into a post-apocalyptic skittering, jittering, tearing the kind of book, and you have “The Hatching” by Ezekiel Boone. It makes my skin crawl just thinking about this story. Is that an itch? Or is a spider burrowing out of my skin?

The story revolves around a large cast of characters, all from different walks of life, professions, genders, age ranges, etc. Basically, a large selection of humanity is varied, but as the story progresses increasingly interconnected. Each chapter is a small snapshot of these persons’ lives as the apocalyptic drama of the spiders rolls out. If you have read World War Z by Max Brooks and are familiar with the format, then you will understand the vignette style of “The Hatching.”

This style of narrative excels at increasing the drama and the thrills. To me, it almost feels like you are running at full speed from moment to moment. In a book about spiders, this is very effective. It is so compelling that I had to put down the book a couple of times and take a breath. It is that tense. Plus, I am not a huge fan of creepy crawlies especially if they burrow into your skin.

The plot of the story starts out benign enough, and this book takes place of the course of 6 days. Spiders start out as scary, but generally, they are not “oh my god” humanity is about to implode scarily. Boone slowly rolls out thrill and disgusting chill on these characters.

First, we see eggs, then we see large-scale destruction from far away, then we see dead spiders in droves, then spiders crawl out of people’s faces… it is a slow-rolling snowball of gross. I tip my proverbial hat to Boone for how he structured many of these vignettes. Sometimes we get to know a character over the course of a few pages, start to empathize with them, laugh at their jokes, and read that they are eaten by a swarm of voracious spiders. Wasn’t expecting that.

“She didn’t know how many of them there were, but they were frantic. Dozens of them at least. They’d been packed in the egg, and they came out in a swarm, their bodies unfolding, alien and beautiful. Big and fast, black apricots thundering against the glass. Skittering.

She put her palm against the glass of the insectarium, and the spiders flew to it.”

Excerpt from “The Hatching” by Ezekiel Boone

Character-wise, many of these people are not developed, and that is fine. With the frenetic pacing, I do not really care about many of the characters’ idiosyncrasies. It just is not important this early in the series. I do expect, as the series progresses, that we will get to learn a bit more about the back story of the main protagonists.  You know, as the cast of characters is widdled, or should I say is eaten, away.

The ending of the story was spot on and a perfect segue way into the next book. I seriously cannot wait to see what happens with the spiders next. They seem almost otherworldly at this point in their ability to reek carnage and disaster on us, weak humans. Maybe next book Boone will have them flying with tiny M16s. At this point, I put nothing past this author. Is this a perfect horror book? No. Is this a fantastic bit of fun to while away a few hours? Absolutely. Totally and completely worth the chills and thrills.

I obtained a copy of this through Scribd, the library, and Amazon.

From Goodreads, “I live in upstate New York with my wife and kids. Whenever I travel and say I’m from New York, people think I mean NYC, but we live about three hours north of New York City. Our house is five minutes outside of a university town. We’re far enough out of town that, at night, it’s dark.
No.
Darker than that.
Dark enough that, if you’re not careful, you might fall off the small cliff at the edge of my property. If you’re lucky, the water will be up enough to break your fall. If you’re not lucky, please sign a waiver before you come to visit.

I’ve got two unruly dogs who are mostly friendly. Well, that’s not true. The part about them being unruly is true, but one of them is the most friendly dog you’ve ever met, and the other dog … isn’t. They are good writing partners, though they spend a lot of their day curled up in front of the wood burning stove and ignoring me. Unless I’m making lunch. They pay attention to me then.