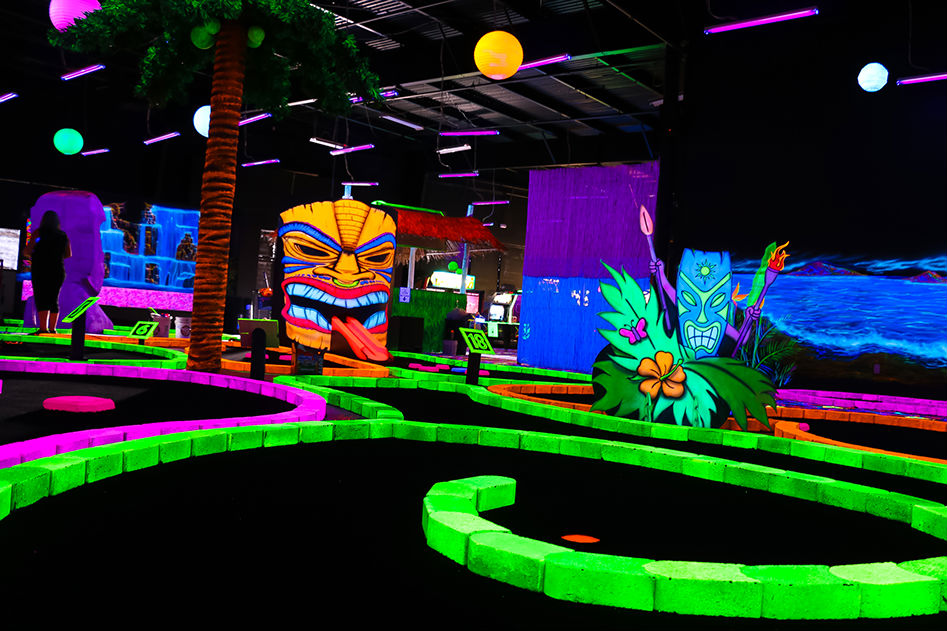 I am not sure what to say about this place. Maybe I went to the wrong glow-in-the-dark

Let me get some Scandia Love.

putt-putt, but this was less than stellar. Here is the thing… I was raised in Las Vegas as a child of the 1980s, we had Scandia. Scandia was freaking awesome. No, it did not have neon and blacklights and tiki torches, but it did have a killer putt-putt range including a castle and water hazards. It also had a batting cage, water bumper boats, two different race car tracks for bumper cars, and a great arcade. As it got older, it did get a bit dated, but C’mon! It was a Vegas landmark.

Confused shark seems confused. Where did my ball go?

Enter the Tiki-putt. It had cinderblocks painted neon colors, murals on the walls, and a course where you have absolutely no clue where to go or what to do next. It was lame sauce. Which may or may not be because I am utterly spoiled on the putt-putt front from Scandia.

Look I have a cleverly placed tongue that makes it near impossible to get a shot through.

When we went to the Tiki Putt it was really crowded, and the crows looked like people having a great time. Kids jubilantly swung their putters and winging balls god knows where. Little ones where constantly marveling at the white lint that was now visible on their black t-shirts under the black lights. My husband and I got into the spirit of things. We winged, and we wanged balls all over a glow in the dark luau. We practically broke a hole with one of mark’s shots. His shot popped out the side of a rock formation and nearly tripped me. They have this cool spinning tunnel that affects some people with vertigo, I, of course, am one of these lucky individuals. That gave me a chance to run back in forth through the tunnel like a six-year-old. That was fun!  At this point, we could give a literal rat’s testes about keeping score or even staying track, but neither did anyone else there. So when in Gresham do as the Greshamites do, have some unhinged fun!

This would be awesome for children if I only understand it. It looks like an Avant Gard Declasse for those artists that want to become one with their art.

The saddest after party in the VIP lounge of your favorite dance club. Wait, that’s a swimming pool room or something,

The Tiki Putt Can be found at: