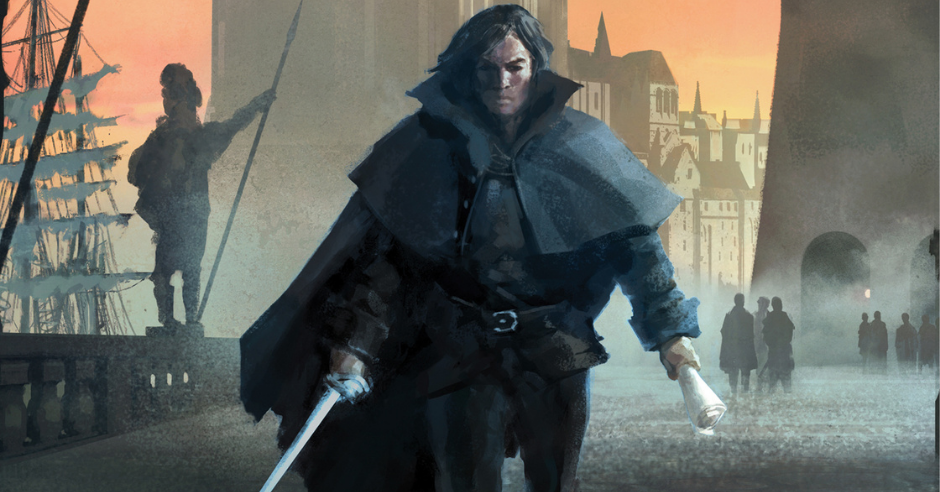 Man Up: On The Sword in the Street’s Relationship to Masculinity by Author C.M. Caplan

I wasn’t supposed to write this book, but in my defense, I couldn’t find an easier way to get it out of my head.

Which I’m sure sounds like a great defense now, when I’ve got a book that’s actually done and published and out there, and people are reading it and enjoying the neurodiversity and are telling me they’ve not read anything quite like this. But when I started it—I mean—I’m not sure I can fully encapsulate how it felt to work on it at the time. It’s difficult to build out that kind of headspace once you’re out of it. It’s like trying to remember that historical events were unwritten at the time when they first happened, that certain things were never foregone conclusions. There’s a certain shift in how you have to view the picture, and I find often that the outlooks you had on something before an event is often somewhat inaccessible after the event actually happens.

All this to say: it’s difficult to fully paint the picture of how totally and overwhelmingly I assumed I was letting everyone in my writing life down when I began working on what would become The Sword in the Street.

But here is my best attempt, and here’s why I wrote it anyway.

I started writing The Sword in the Street in October of 2019. It had been a couple years since I finished anything, and I still had no publications worth speaking of. The nearest thing I had was an award I’d won for being the best fiction writer in my graduating class, due to my work on my Creative Writing thesis, which over the last few months had become 3/4ths of a full book. It wasn’t even a finished draft yet, and it had already won me an award and support from every peer, colleague, and mentor in my life at that time.

Which is exactly why I couldn’t finish it.

It didn’t scare me.

Like—what’s the point of writing something you know, with all your heart, would go over well? How are you going to push the envelope, try to be better, do better, write better, and cultivate all the basic tools of self-improvement, if you know that where you’re at now is good enough to take you wherever you want to go next? There is no doubt in my mind that the book I was working on prior to The Sword in the Street would have taken me places, and may have even been foundational to a career.

But it couldn’t do the most important thing I needed it to. Not anymore. It couldn’t make me a better writer.

I should note at this juncture that putting it down in words like this, arranging it into some kind of narrative makes this process into something far too…clean. I had no idea why I didn’t want to write it anymore at the time. And I’d spent most of that summer wrestling with what to do with it, adjusting it, making minor changes and tweaks to the worldbuilding instead of making forward momentum.

It was around this time I first wandered into a few discussions on toxic masculinity, and the final nail in this previous book’s coffin was hammered home.

Because I couldn’t stop thinking about it.

Or rather—it’s not that I couldn’t stop thinking about toxic masculinity as a concept. It was more toxic masculinity as a point of discussion that kept snagging on my attention. Like, it just kept coming up, and every single time I saw it, the concept was treated in such a limited capacity, and with a complete failure of imagination. It seemed to me that these people were defining toxic masculinity as the behavior of that stereotypical jock we all already knew was a piece of shit decades ago. And I kept catching myself thinking, “Seriously? Is that it? Mental and physical toughness? Stoicism? Self-sufficiency?”

I couldn’t get it out of my head. Not to say that these traits could never lead to toxicity when taken to their extremes. But so could any behavior when driven to an extreme. How could everyone have these flat, banal conversations for so long?

I began to wonder if any men could even really see themselves in these conversations in the first place. What use is it talking about toxic masculinity if so many men can’t even see themselves reflected in the framework?

I felt, at the time, as if I were being talked at. Talked through. Someone was speaking to what my, or men in general’s, relationship to masculinity was assumed to be. But it never felt like anyone having those conversations had bothered to ask an especially diverse range of men what it feels like, being a man, sociologically. If they had, I figured they would’ve done a better job of incorporating an eye towards the systemic pressures that push men to act and want to behave in certain ways.

It was, all too often, an outpouring of men, do better, which to be clear we certainly need to do. But it made sense to me why many men were having difficulty hearing that, since the foundation of the discussion seemed so fundamentally unconcerned with how men experience their relationship to masculinity. There was an academic kind of incuriosity I saw going on. A stifling abstraction of lived experience that failed to capture the problem in a way some could connect with. I felt as though there was a “why should I change for these people who can’t even speak accurately to what I go through” kind of undercurrent to any pushback. A “how can I do better if you won’t even bother understanding how I do anything in the first place?”

So, I put it on myself to do what I do best: overcomplicate the conversation. I could speak to this from a place of experience that I felt was sorely lacking. I could say, “You want to know why you need to do better? I have been there. Let me show you. Here is why.”

I wanted to be the voice I wish I’d heard when I was eighteen or nineteen. To write the book I wished I had encountered at that age. There’s a number of things that I wish someone had sat me down and addressed back then, and I wanted to see if I could be that guy for someone else.

That is why I had to write this book. That was why I couldn’t get it out of my head. That was the thing this book provided me that no amount of praise and accolades my prior work had won could give me. It was a scary, perhaps naïve position to put myself in.

Like—who the fuck am I, right? How could I possibly speak to these experiences? What if I get it wrong? What if they don’t understand that all I’m trying to do is paint a complete picture of two people’s experiences, their complications, their dysfunctions, and ask readers to decide for themselves what they see in it?

I knew I had to make John and Edwin’s relationship dysfunctional. I had to give them difficulties communicating. And they needed to, like far too many people, confuse not feeling powerful with not having power.

I needed them disempowered while struggling in a world that tells men that power is something that they’re supposed to have. Or at least they need to strive for it.

Importantly, I did not want to demonize this desire. It was the sort of thing that could be awful, depending on the why of it, the scale of it. The context that surrounds the urge to get it.

But John and Edwin don’t want power for the sake of it, or for the purpose of misusing it. They wanted to put it to good use for the people they cared about. They wanted enough to survive. But without any positive models for how men are supposed to be, the two don’t always know how to go about it. That was the driving force that compelled me to keep writing. They’re messy broken people, but I wanted to see how close they could come to getting their shit even a little bit together.

I wanted to write about their desire for agency in a world that treats not having any as a personal failing, a world that’s telling you that you possess a fundamental incapability to be fully who you are. A compromise on what you’re told is your inherent worth: your ability to earn a living. To provide.

Exploring these ideas, the nature of their dysfunction, and the systems that perpetuate it—that was a terrifying process. I almost quit on it a number of times. And I’m still not sure if the original aim was done as well as it could’ve been. Especially as new stuff got layered in as time went on. But it was also the only way I knew how to write a book. It was as thrilling as it was horrifying, and while the book I had been working on prior to this might have already been well-received, it couldn’t scare me, couldn’t challenge me the way I needed it to.

And this book could. It did.

I don’t know how close I came to getting this right, but given how many people have told me they’ve never read anything quite like The Sword in the Street, I’m hoping I managed to speak to something people might not get to see often otherwise.

Check Out some of our other articles

Check Out The Sword in the Street

C.M. Caplan is a quadruplet (yes, really), mentally disabled, and he spent two years as the Senior Fiction Editor on a national magazine while he was still an undergrad in college. He has a degree in creative writing and was the recipient of his university’s highest honor in the arts. His short fiction also won an Honorable Mention in the 2019 Writers of the Future Contest. His debut novel, The Sword in the Street, was a 2021 SPFBO semifinalist.