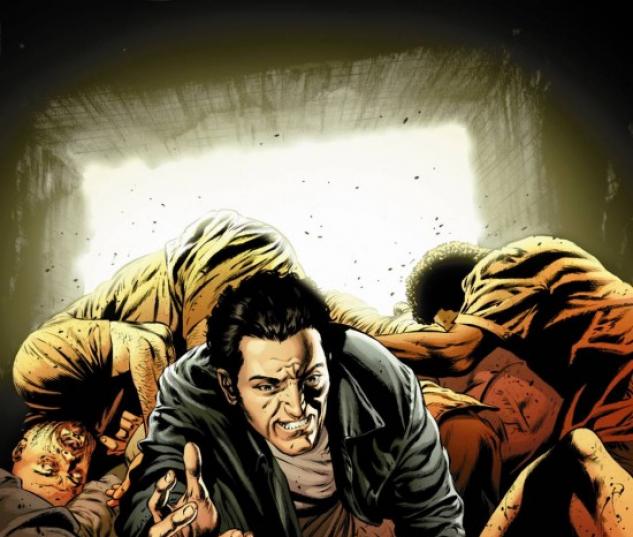 Setting Up Our Home Amongst The Wreckage

No one can tell what goes on in between the person you were and the person you become. No one can chart that blue and lonely section of hell. There are no maps of the change. You just come out the other side.
Or you don’t.―

The Stand – by Stephen King

What is American Nightmares About?

The deadly super flu Captain Trips has devastated the country and now the few survivors must pick up the pieces and go on. Larry Underwood seeks escape from New York City. Lloyd contemplates an extremely unsavory dinner option in jail, and Stu Redman makes a desperate bid for freedom from his interrogators. Most ominous of all, the strange being called Randall Flagg continues his dread journey across the devastated landscape of America. Collects The Stand: American Nightmare #1-5.

We are really rolling now. Thus far we have met all the titular characters: Stu, Harold, The Dark Man, Mother Abigail and more. Each character is finding their place in this narrative.

How is it going to play out?

From the drama and dialog, we know that some of the characters, namely Nadine and Harold are a little broken, a little off. They don’t feel the comfort that they should in the presence of Mother Abigail. They feel fear, anxiety, and anger.

As it follows the story of the novel The Stand very closely, we are getting set up in Boulder. Getting rid of bodies, counting heads, and getting the power-up. I enjoyed the scene building here, it is drawn and written tension. We know something is going to happen, we just don’t know what.

And, the dark man is always there like a toothache or a sore. Slowly festering in the minds of the townsfolk.

An excellent second chapter of this fantastic story.

“The place where you made your stand never mattered. Only that you were there…and still on your feet.”
― Stephen King, The Stand”