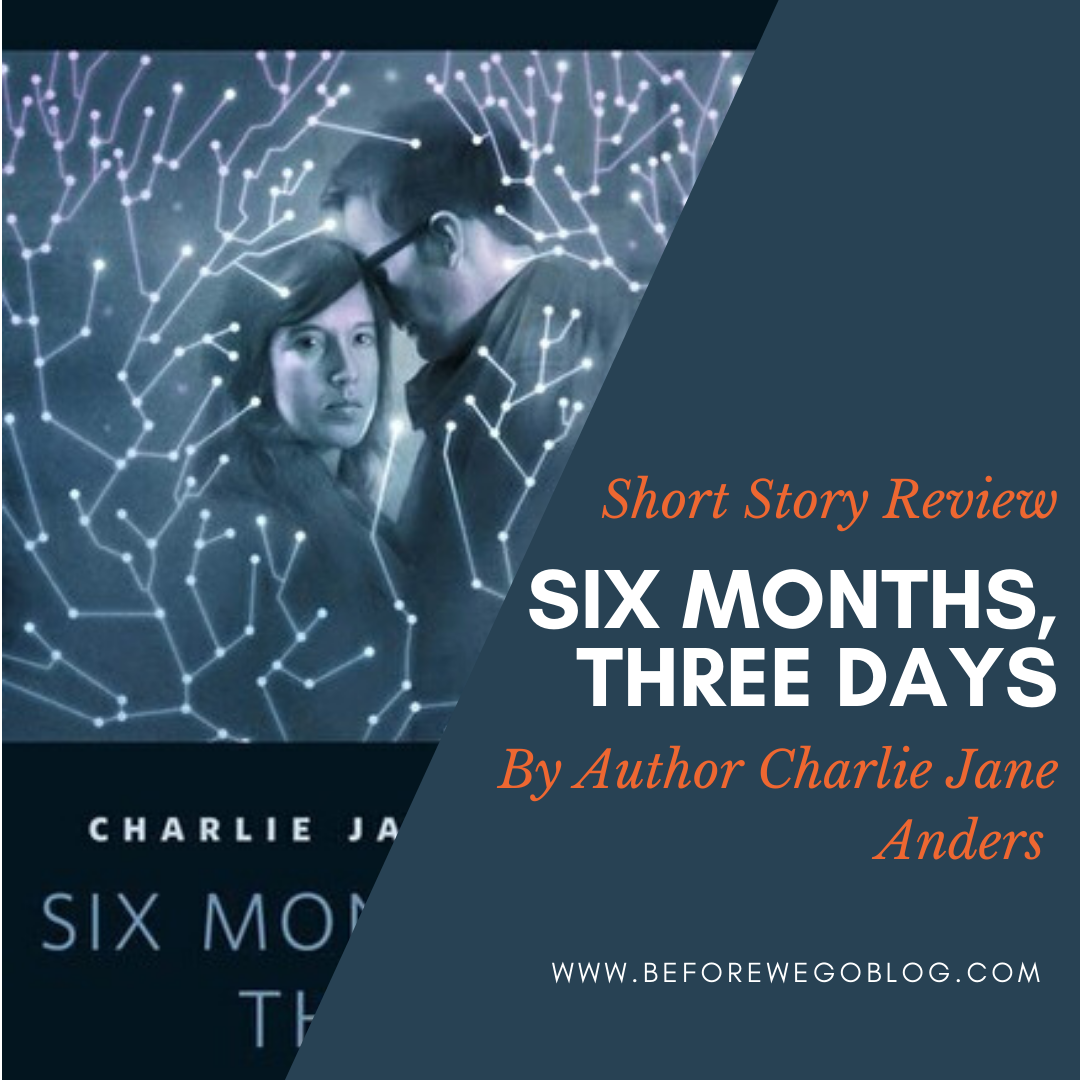 The Juice is Worth The Squeeze – A Review of Six Months, Three Days by Charlie Jane Anders

What Happens When an Unstoppable Force Meets an Immovable Object?

Doug and Judy have both had a secret power all their life. Judy can see every possible future, branching out from each moment like infinite trees. Doug can also see the future, but for him, it’s a single, locked-in, inexorable sequence of foreordained events. They can’t both be right, but over and over again, they are.

Obviously these are the last two people in the world who should date. So, naturally, they do

Six Months, Three Days is the winner of the 2012 Hugo Award for Best Novelette.

Charlie Jane Anders is a writer that I discovered last year and immediately fell in love with. I enjoyed The City in the Middle of the Night, and I had to investigate all the other things she has written as a matter of course. I am so glad I did. Anders is a Hugo and Nebula award-winning writer and a Hugo nominated fancaster with her partner Annalee Newitz. You can find her excellent podcast here. I bought a hardback copy of her short stories after checking out and reviewing As Good As New. A twist on the classic three wishes tropes, and is also my favorite short story. As Good As New exudes pure positivity even in the face of tragic or exhausting circumstances. It is a quality that I find quite a bit in Anders’s writing. She has a way of finding the good, the beautiful, the heartfelt in places where finding those things is hard. Even in the direst of circumstances, there is always good and always something beautiful even if you can’t see it, and Anders calls it out; she shows us.

“Well,” Judy says. “There are a million tracks, you know. It’s like raindrops falling into a cistern, they’re separate until they hit the surface, and then they become the past: all undifferentiated. But there are an awful lot of futures where you and I date for about six months.”―

There are six stories in Six Months, Three Days, Five Others, all are wonderful. However, the two I gravitated towards where As Good As New referenced above, and Six Months, and Five Days. Six Months and Five days is another short story with the same sense of optimism demonstrated in As Good as New. Six Months and Three Days is a love story, of a sort. What happens when two individuals, one who can see his future, and another who can see all futures meet and fall in love? It is a literal definition of a rock and a hard place.

The story is charming, and we know right from the beginning how it is going to end. But, the ending is not important. It doesn’t matter how Doug and Judy end up getting there; it is the six months and three days of life that happen before the final moment, which I think Anders wanted to highlight. Yes, we can know all the answers. Yes, we know there will be lots of pain in this relationship. Yes, we know exactly how it is going to end. However, there are many beautiful moments, moments of love, and life that are worth celebrating even if you have already seen them in your mind’s eye; you haven’t experienced them.

The juice is worth the squeeze!

Check out the full story collection, but read Six Months and Three Days for sure.

I bought a copy of this for my personal library.

My latest book is The City in the Middle of the Night.

Previously: All the Birds in the Sky and a short story collection, Six Months, Three Days, Five Others.

Upcoming: An untitled YA trilogy, and a short story collection called Even Greater Mistakes.

I used to write for a site called io9.com, and now I write for various places here and there.

I won the Emperor Norton Award, for “extraordinary invention and creativity unhindered by the constraints of paltry reason.” I’ve also won a Hugo Award, a Nebula Award, a William H. Crawford Award, a Theodore Sturgeon Award, a Locus Award and a Lambda Literary Award.

I organize Writers With Drinks, which is a monthly reading series here in San Francisco that mashes up a ton of different genres. I co-host a Hugo Award-winning podcast, Our Opinions Are Correct, with Annalee Newitz.

Back in 2007, Annalee and I put out a book of first-person stories by female geeks called She’s Such a Geek: Women Write About Science, Technology and Other Nerdy Stuff. There was a lot of resistance to doing this book, because nobody believed there was a market for writing about female geeks. Also, Annalee and I put out a print magazine called other, which was about pop culture, politics and general weirdness, aimed at people who don’t fit into other categories. To raise money for other magazine, we put on events like a Ballerina Pie Fight – which is just what it sounds like – and a sexy show in a hair salon where people took off their clothes while getting their hair cut.

I used to live in a Buddhist nunnery, when I was a teenager. I love to do karaoke. I eat way too much spicy food. I hug trees and pat stone lions for luck. I talk to myself way too much when I’m working on a story.