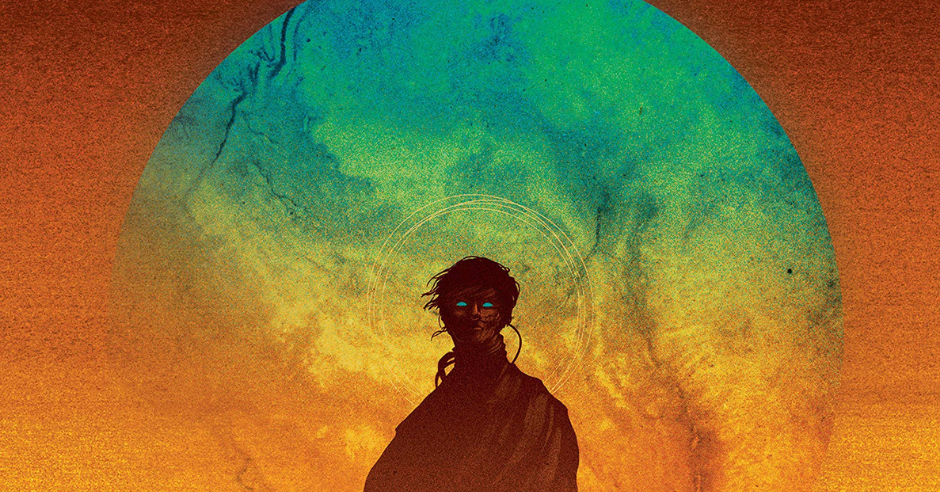 I Just Read Dune For The First Time And You Won’t BELIEVE What I Thought Of It. Well, Maybe You Will.

I must not fear. Fear is the mind-killer. Fear is the little-death that brings total obliteration. I will face my fear. I will permit it to pass over me and through me. And when it has gone past I will turn the inner eye to see its path. Where the fear has gone there will be nothing. Only I will remain.―

Just like any sci-fi/fantasy fan, I have my share of blindspots. Shows I haven’t watched (Sorry, Buffy). Movies I haven’t seen (Sorry, Predator 2). And books I haven’t read.

This essay is about the biggest, glaring hole in my science fiction library: Frank Herbert’s Dune.

Given the relatively imminent release of Denis Villeneuve’s film take on the infamously unadaptable work, I decided it was time to fill in the gaps in my knowledge and find out just why Dune is such a classic sci-fi juggernaut. So I grabbed the hardcover deluxe edition, with the absolutely beautiful painted cover, and sunk my teeth into it.

…and if I could have spit it out, I would have. Because I did not enjoy it at all.

I know there are a lot of people who would view that as heresy, and that’s fair. If you’re a die-hard ‘Duney’, you’re totally within your rights to jump off now. But I’m not looking to make any friends from this review. In fact, I’m expecting to make a few enemies. I’m just here to give my honest take, even though I admit there’s probably a hundred things I missed or forgot about as I slogged through it over the course of a month.

Dune features a vast array of flat characters with no personality or any particularly redeeming qualities, thrust into a world that features a mishmash of a hundred different seemingly incompatible sci-fi and fantasy concepts. And despite the fact they’re crammed together in a staggering 700-page behemoth of a book – featuring a simplistic story that could fit in half that length – nothing is ever clearly explained to my satisfaction. In hindsight, that last part is mostly my fault, since I never wanted to flip back and forth between the Appendix. So I won’t judge it too harshly for my own laziness.

But, instead of letting that rant stand on its own, let’s indulge me for a moment and break it down, shall we?

Part One – The Characters Are Boring

Now this isn’t as big of a knock against the book as you would think. Dune’s place in timeline of science fiction history puts it smack dab in the transition period from the Golden Age of Sci-Fi and the coming of the 60s New Wave, and so it shares a lot of common pitfalls of books from both eras. The Golden Age problem it suffers from is flat, one-dimensional characters.

Now don’t get me wrong, I love the stories of Asimov, Clarke, Bradbury and other luminaries of the age, but I couldn’t tell you a damned thing about their characters. They’re similarly flat vehicles for the plot and ideas rather than anything deeper. Dune suffers similarly since the characters (and there are a lot of them) all feel like personality-less puppets merely reacting to the events of the story and reciting dialogue to get points across rather than real breathing humans experiencing events with a sense of introspective weight and actual agency.

But Golden Age Sci-Fi was always much more about exploring fantastical concepts rather than the getting to know people in it, which isn’t a bad thing at all. But in order for the audience (or, subjectively, me, at least) to be okay with the flat characters in Dune, it would have to really, REALLY got to bring it in terms of the story and concepts.

Part Two – The Story and Concepts Are A Bunch of Crap

Okay, maybe that sub-title was too harsh, but I had to keep your attention somehow. Anyway, this is where Dune falls prey to the second half of its place in history: the 60s New Wave.

Let’s be clear, New Wave sci-fi is weird as shit.

It took the scientific adventurism of the Golden Age, eschews most of it and transitions into bizarre, inward-facing, psycho-sexual, acid trippy fiction. And if you’ve ever seen David Lynch’s 1984 film adaptation (more on that later), you’ll see how Dune is a clear waypoint between the two.

The world-building (and there is a lot of it) in Dune felt like Frank Herbert had a bunch of wildly disparate ideas that on their own sound pretty great, but when shoved together in a single novel, makes for a confusing mishmash. The Bene Gesserit Witches and the whole convoluted concept of a Kiwsatz Haderach feel like they belong in an entirely different book, especially when a native society like the Fremen could’ve easily supported their own mysticism and streamlined the entire process. I’m still not even entirely sure what the point of the Water of Life was, let alone the character of Alia. Especially when all tangled up in a palace intrigue story set in the midst of a space opera with a narrow galactic focus.

What hurts the book further is that all these jumbled ideas seem hung onto a very barebones plot of a young teenager avenging his father’s death by inadvertently (and perhaps ethically undeservingly) becoming the messianic savior of a desert dwelling people. And yet, there were so many moving parts to the novel that the only person who seemed to know what was going on (myself included) was Paul, because he could see the future. That’s a particularly valuable skill to have when events seem cloudy and a bit all over the place.

Part Three – Who Names A Character In A Futuristic Sci-Fi Epic ‘Jessica’?

Seriously. I know this is super petty, but it bothers me more than I’d like to admit. Oddly enough, I’m fine with ‘Paul’. But ‘Jessica’ rubs me the wrong way. Don’t ask me why.

Yeah. I watched it.

“But, Ganesh,” I hear you ask. “If you didn’t like the book as much as you said, why’d you watch the movie everyone already agrees is terrible?”

Because I’m stupid and I hate myself. That’s why.

But really, I wanted give the story a fair shake and see if my issues with the book stemmed from my own flawed reading of the source material. So I decided to watch someone else’s flawed reading of the source material, and, unfortunately, came to the same conclusion. The characters are stoic and bland, the plot is paper thin and is consistently overwhelmed with the concepts that feel like convoluted gibberish.

The best part of the movie, though, is Sting. He’s the only one on set that seems to actually be having fun and getting into it. As a result, it’s a joy to watch him vamp about whenever he’s on screen.

Also, there’s a scene where Rabban squishes a tiny hippo and drinks its blood like a juice box. It’s peak Lynch and I absolutely love it. I’d love more of that, please.

Regardless, I absolutely plan on seeing Denis Villeneuve’s take when it releases (on HBO Max, I guess?) later this year. Why? Because I’m stupid and I hate myself. Where were you 2 minutes ago? But also because I really feel like there is something to Dune that I’m missing and I hope a more modern lens will help show me the error of my ways. Plus, I really want to see that tiny hippo scene in 4K.

Yes, there’s a ‘but’. And the ‘but’ is that even though I found Dune to be a pretty dry, muddled mess, it’s pretty clear even to me the kind of effect it had on all the science fiction that came downstream. Dune’ sprawling, epic feel and transcendental concepts really have filtered through and impacted the style of mainstream sci-fi storytelling for the better, as subsequent authors and filmmakers have basically perfected and streamlined the paradigm shift Herbert brought to the table in 1965.

So, in the words of Lando Calrissian – a character who would never exist without Dune:

Check Out some of Ganesh’s other reviews and articles