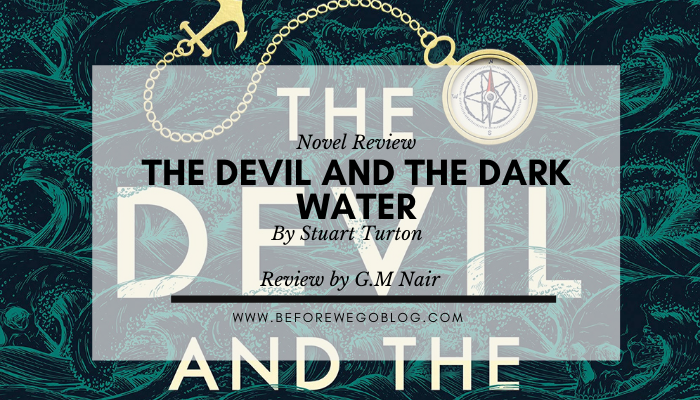 A Mystery Spread a Bit Too Thin

The Devil and the Dark Water

A murder on the high seas. A detective duo. A demon who may or may not exist.

It’s 1634 and Samuel Pipps, the world’s greatest detective, is being transported to Amsterdam to be executed for a crime he may, or may not, have committed. Travelling with him is his loyal bodyguard, Arent Hayes, who is determined to prove his friend innocent.

But no sooner are they out to sea than devilry begins to blight the voyage. A twice-dead leper stalks the decks. Strange symbols appear on the sails. Livestock is slaughtered.

And then three passengers are marked for death, including Samuel.

Could a demon be responsible for their misfortunes?

With Pipps imprisoned, only Arent can solve a mystery that connects every passenger onboard. A mystery that stretches back into their past and now threatens to sink the ship, killing everybody on board.

The breathtaking new novel from Stuart Turton, author of the The 7 1/2 Deaths of Evelyn Hardcastle, winner of the Costa Best First Novel Award.

For those of you unfamiliar with Stuart Turton, he is the author behind the fantastic debut novel The 7 1/2 Deaths of Evelyn Hardcastle – a time and reality bending murder mystery that deftly mashes up Agatha Christie’s period whodunits with Groundhog Day (or Edge of Tomorrow, or Source Code, or Happy Death Day, or Palm Springs, or whatever your time-loop movie of choice is). Evelyn Hardcastle was a taut, thrilling read that kept me glued to the page with its clever concept and excellent execution. So when I heard Turton was releasing his second book: The Devil And The Dark Water, I picked it up immediately.

The concept of Dark Water is equally as interesting as Evelyn Hardcastle: In 1634 Batavia, Samuel Pipps – the world’s greatest detective – has been arrested and is due to be executed for treason upon his return to Amsterdam. The only one who believes him innocent is his sidekick and bodyguard Arent Hayes. Pipps and Hayes, along with a gaggle of nobles – including intelligent, erudite Sara Wessel – are due to sail back on the ship Saardam, which is quickly beset upon by the malevolent miracles of a demon called ‘Old Tom’ who seems to have connections to every passenger of import on the boat. With Pipps shackled below deck, it’s up to Arent and Sara to prove his innocence and battle the demon lest it sink the ship and kill everyone on board.

Now the idea of a Watson-type character forced to solve a mystery involving his ace-detective friend amidst a ship of horrors is an intriguing hook, but unfortunately the execution didn’t live up to the promise for me. There are several moving pieces, characters, and concepts that Turton introduces within the 450-pages that just feel like padding. For example, the existence of two separate, mysterious cargos on the ship are mentioned within the first 20 pages, and [spoiler alert] end up being relative nothingburgers, despite being teased multiple times. [/spoiler alert]

This repeats itself with characters, specifically several white, male noblemen with names and personalities so similar I had trouble telling them apart. And there were times I forgot some of the female side characters existed until they popped back into frame a few chapters later for a minor appearance. Ultimately, I think there’s just too much in this book, and it would have benefitted from a streamlining cut of about 100 pages. Part of this may be due to the existence of multiple viewpoint chapters from suspects and side characters, which don’t seem particularly necessary in a whodunit.

Some people had problems with the ending of Evelyn Hardcastle, stating that it was kind of an extraordinary meta-narrative cop-out in what was an otherwise great book. I never fully agreed with that since, given the very high concept of that particular novel, there had to be some meta-nonsense to explain it all away.

Dark Water’s premise, on the other hand, is not unlike something we would see in a period mystery novel, even with the supposed supernatural element (shades of Hounds of Baskerville). So its ending does not get that much of a pass, and ultimately I found it disappointing. Not only in the reveal of the true culprit(s), but also in the execution of the reveal itself. While Arent and Sara do succeed in uncovering the plot behind the arrest of Pipps and the devil Old Tom, the actual mechanics of the plot have to be explained to them by the perpetrators in long, drawn out monologues – like a supervillain revealing their plan, but after the fact. Part of the fun of a Sherlock Holmes or Poirot mystery is them mansplaining the solution to you in intricate steps that you could trace back.

Now while some of that is present here, a lot of the solution relies on interpersonal relationships and other mechanics that neither Arent, Sara, or the audience is privy to, which is kinda lame.

Despite everything I’ve mentioned above, Dark Water isn’t a bad book, Turton’s language is crisp and descriptive and the main characters – especially Arent – are a joy to read. There’s clearly a sense of craft that went into the mystery, especially with all the moving parts and characters and, in a shorter, more focused book, it would have been absolutely brilliant. The main problem is that the mystery is spread out too thin and with several disappointing red herrings, the reveal of the solution just doesn’t land with the bang I was hoping for.

Check Out Some of G.M. Nair’s Other Reviews