The Books That Made Us – Dragonsong by Anne McCafrey

“My nightly craft is winged in white, a dragon of night dark sea.
Swift born, dream bound and rudderless, her captain and crew are me.
We’ve sailed a hundred sleeping tides where no seaman’s ever been
And only my white-winged craft and I know the wonders we have seen.” 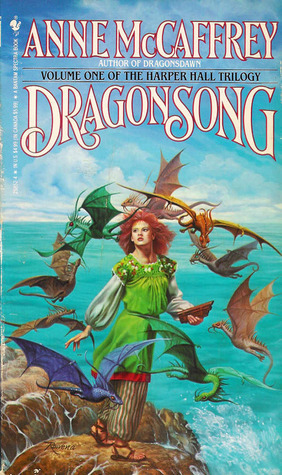 Dragonsong is probably not the best book I have ever read. It’s likely that if I read it for the first time today, I would enjoy it quite a bit. But it would almost certainly not find itself in the place of solitary appreciation it enjoys.

I was maybe nine when I first got my hands on a copy of Dragonsong – a beautiful copy no less, showing Menolly with her red hair flying about her face and all those little colorful dragons (well, fire-lizards)! Children’s books – and Tolkein’s Lord of the Rings and Silmarillion (which I read straight-through not too long before) – were all I had seen at that point, and I think I knew at once this was what I wanted, and I wanted more.

I wouldn’t have been able to say then what it was I wanted more of, except for the dragons. I knew that faster than I could blink. Dragons – or fire-lizards, or whatever – that were good, or at least not evil like Smaug or Anfalacar the Black (was that his name? It’s been so long since I read the Silmarillion I forget). And there was a good part of me that would have liked to be Menolly, oh, not her Hold or her father, but her fire-lizards. I would have loved to be that girl, surrounded by colorful flying dragons that were my friends, just living a life out there alone with them. (It would not be inaccurate to say that while I would really like to have friends, I am fairly introverted and have struggled all my life to make friends – and when I did find another kid I could be friends with, more often than not, their parents did not want that to happen. It sounded like a good life).

And I certainly knew I wanted to be a dragonrider.

Now I can explain more of what caught my attention. The characters were a lot of it. They felt real. Anne McCaffrey’s characters (at least in every book of hers I’ve read so far) are remarkably easy to read, and always feel alive, like I could touch their personalities. That wasn’t something I had seen before. Not in the Lord of the Rings, where the characters felt … hollow. Not in the children’s books I’d read at that time, either.

And, while the world of Pern was male chauvinist in a lot of ways, the story wasn’t. Only men could be Harpers. That was what most people thought and believed, what they held fast to it, not noticing it even when it was challenged. But was that supposed to stop Menolly? No. Only men rode the fighting dragons, but did it have to be that way? Was it wrong or demeaning for a woman to ride a fighting dragon? Did it make her less than or was it contrary to her nature? I didn’t get that impression, not at all, when Mirrim impresses Path in Dragonsinger (the sequel). It wasn’t like The Lord of the Rings, where it wasn’t really right for Eowyn to be the warrior-princess she was, and where she was supposed to renounce that part of her and grow a garden with Faramir, while it was right and proper for Aragorn to be a warrior. Instead, Pern was a world where people were constrained in many ways by their society (and perhaps some other factors), and change might be possible, or it might not be, but it didn’t mean things were the way they should be. It was a world with active females who pursued what they wanted.

And no less importantly, it was a world where the main villain, the great threat, was not personal at all: it is the impersonal menace Thread that looms over their heads, a menace that will destroy all of them if it is not fought by the dragons, friend or foe alike.

And Dragonsong was a story about one person’s life, one person’s journey and quest, a story that would now probably be called “slice of life,” not one about someone whose actions hold the fate of the world in her hands. It was just a story about living life.

All of these are things I enjoyed, things that have influenced me, and things that repeatedly recur in what I like. They’re not the only things I like, some of the things I like most might not even be included, but this was the first book I read that was really ‘my kind of book’. And I’ve never forgotten it. I don’t know for sure how much it meant to me, or how much it influenced me, but I know that when I think of ‘books I really liked, books that are special in a way and there will never be another book to me that is quite what this one is, that usurps this one’s place to me’, Dragonsong is one of those I think of.

And it is certainly the book that first allowed me to visualize my dream of being a Dragonrider, something I’ve entertained somewhere ever since. I meet other dragons and turn my heart other places, but I will never forget that first dream: to ride a dragon and fly Thread. That would be a fight I could throw myself into without reserve, and that can’t be said of most fights or most villains in fantasy that I’ve read, being something of a pacifist myself and certainly rather non-violent. But Thread I could fight as fully as everyone, and to have that bond with a dragon would be worth almost anything. It is thedream.

Website (reviews for books I’ve read, ramblings about things that interest me, the occasional art post, and the books I write): enthralledbylove.com

Website (reviews for books I've read, ramblings about things that interest me, the occasional art post, and the books I write): enthralledbylove.com Books Link: https://books2read.com/raina_books