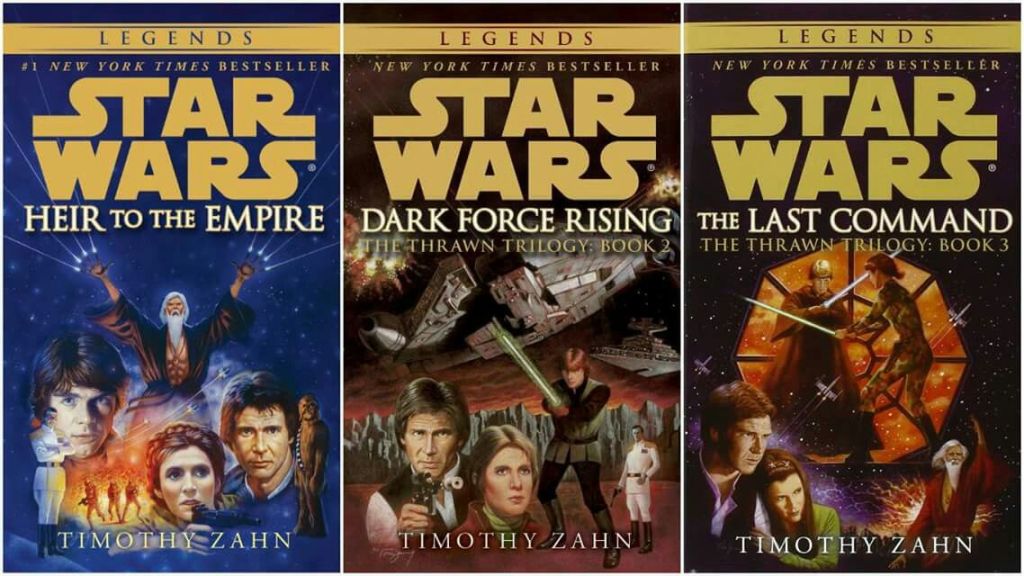 The Books That Made Me – The Thrawn Trilogy by Timothy Zahn

“If you don’t want to be noticed, you don’t use a Star Destroyer.”

Let us journey back to an ancient time known as 1992 where I was a boy aged twelve and the book, Dark Force Rising was available in a book rack at a hotel gift shop. I, like many young boys, lived and breathed Star Wars. I didn’t know this was the sequel to Heir to the Empire but I can remember my first thoughts seeing it. “It’s so large! Like the books my dad reads! It looks so adult and serious!”

My favorite character was Luke Skywalker instead of Han Solo, I never saw the original trilogy in theaters but I’d seen it repeatedly on television to the point I’d already memorized the words. I made my own lightsaber out of a wooden pole because the plastic ones sucked (IMHO). My first Star Wars toy was Jabba the Hutt because all of the other ones were sold out at KB Toys.

I devoured Dark Force Rising and thought it was the best thing since sliced bread despite not having any idea who half the characters were. Being the industrious lad I was, I immediately sought out the original book and purchased it at Waldenbooks. You know, that place which existed before Borders but like it has since faded into the mists of time. At least around Ashland, Ky.

Having re-read Heir to the Empire as an adult, it’s not a particularly deep or serious science fiction book like I remember it being. However, as an eleven year old, it was far more mature than the original trilogy (not hard I know). I’m sure I’m not alone in this regard because this book more or less set off the Star Wars Expanded Universe as we know it. Sure, there had been previous Star Wars novels but not nothing quite as successful as this.

Literally hundreds of books owe their existence to the explosive success of Heir to the Empire and its sequels. Now, it’s probably as much due to the ridiculous popularity of Star Wars that this book was a runaway hit but Timothy Zahn’s writing also deserves a lot of credit.At heart, it does what every Star Wars fan secretly longed for a writer to do: take the saga seriously.

Now, much to my joy and regret, I’ve read probably every Star Wars book written up until Deathtroopers (that’s when I realized I no longer cared ‘quite’ as much about Star Wars as I used to-I only have Luke Skywalker looking down at me with a green lightsaber from my desk right now).

Having read, again, literally hundreds of Star Wars novels I still put Heir to the Empire in the number one spot. It stands the test of time and remains one of the few Star Wars novels I consider just plain good fiction. Why? It’s not the plot. I’ll be honest, it’s not terribly original. Instead, it’s three things: characters, mood, and pacing.

The characters are who every Star Wars Expanded Universe fan remembers. Well, at least they remember Mara Jade and Grand Admiral Thrawn. Captain Pellaeon, Talon Karrde, and Joruus C’Boath are usually remembered fondly but rarely given quite the same level of attention as the previous two. I’d spoil for new readers of the Expanded Universe what ultimately happens to a few of the characters but some of their fates actually lead me to abandon the EU save as the occasional picky browser.

Grand Admiral Thrawn is pretty much a character tailor-made to be loved by fan boys. Sort of like how young male Trekkies love Klingons, Star Wars fan boys who don’t love the Rebels inevitably love the Empire and Mandalorians. This existed even during the original trilogy where there are people, to this day, who will insist their favorite original trilogy characters were Admiral Piett and General Veers. Why? Well, the Empire has the coolest stuff and better uniforms. Sure, they’re Space Nazis but they’re not ACTUALLY Nazis so it’s okay to like them. I’m deeply ashamed of them and can’t believe they exist *hides his copy of the video game TIE Fighter and his Stormtrooper helmet*.

Seriously, Grand Admiral Thrawn is basically designed to be loved by those who occasionally like to root for the villains. He’s a cultured genius with charisma to burn and you can easily see why people would want to follow him. Inspired by such diverse personages as Sherlock Holmes, Sun-Tzu, Caesar, Erwin Rommel, and Karl Donitz; Grand Admiral Thrawn is a tremendously fun character. A lot of fans have complained about his “special ability” which is the power to predict the actions of foes in battle by studying their species’ art and what art they personally collect.

To which, I say, Luke Skywalker can levitate things with his mind. Suspend your disbelief, people.

Mara Jade is also another character of runaway explosive popularity. Frankly, I wish she’d been slightly more popular for a number of reasons. It’s frankly easy to understand why Mara Jade was so popular, she’s the fourth girl in Star Wars prior to Amidala. There’s Leia, Mon Mothma, and Ion Cannon Girl. Adding a snarky kickass female to balance out the gender ratio a bit certainly couldn’t hurt Star Wars’ popularity towards the feminine gender. Plus, as the vast amount of fan art goes, it didn’t hurt her popularity with guys either.

Honestly, Mara Jade is a bit of a stereotypical character. She’s an Imperial Princess, for all intents and purposes, raised by the Emperor to kill our hero and who ends up falling in love with him. This is a trope as old as Greek myths and certainly was a well-trodden trope by the era of Ming the Merciless. Hell, TV tropes.com even has a name for it in the “Mad Scientist’s Beautiful Daughter.” What’s actually amazing is that Timothy Zahn didn’t have a romance with them blossom despite everyone expecting it. Frankly, for the longest time it seemed like she was more likely to hook up with Kyle Katarn in the Dark Forces games.

Shut up, my fanfics are canon! George Lucas just doesn’t know it!

Still, Mara Jade transcends the trope a bit by combining Marvel’s Black Widow with a gender-flipped Han Solo. I’m not quite sure what that says about Luke but fans were clamoring for them to get together for literally a decade after this book was written. Here, she’s mostly obsessed with killing Luke for slaying the Emperor, but it’s easy to see she has doubts from the very beginning.

After all, it’s been five years and even the most hardened fanatic is going to have qualms about slaying someone when it will destroy your present life. Oh and you were raised to believe in Space Hitler only for the rest of the galaxy to painfully disabuse you of the notion he was actually this warm and cuddly guy. I actually liked the Coruscant scene from the special edition where they were pulling down Palpatine’s statue. The Emperor has had twenty years to quietly butcher and punish those people who elected him. I think that’s enough time for even the people of Space New York/Washington D.C. to get the message.

The other characters are still very interesting. Captain Pellaeon is basically Thrawn’s Watson. He serves as the audience POV into Thrawn’s world while simultaneously being a respectable naval officer in his own right. It’s easy to believe that he’s completely unaware how insane it is to continue fighting years after the galactic capital has fallen to the Rebellion and the rest of the galaxy is rejoicing at his government’s disillusion.

In a way, he’s a nice critique of totalitarian governments because Pellaeon exists in his own little world. The opinion of the common man in the galaxy is utterly irrelevant to Pellaeon’s view of the world.

Talon Karrde is sort of a less enjoyable figure, being the sort of idealized “Gangster Next Door” who fiction keeps insisting exist but actually don’t. In real life, Jabba the Hutt is probably more likely to exist than a genuinely noble crime-lord who somehow controls half of the galaxy’s underworld. Unfortunately, he’s obviously a favorite of Timothy Zahn and plays the role of putting the galaxy’s criminals squarely on the side of the New Republic.

Joruus C’Boath…. is a crazy Sith Lord. Except, this was before the word “Sith” had appeared on screen so he was just a “Dark Jedi Master.” Lucas’ real problem with storytelling began with Return of the Jedi because, for the life of me, it took decades for us to find out who the hell the Emperor was and why he had the same powers as Yoda. Even now, it’s not exactly clear (at least to film-goers) where the Sith come from other than they’re an old secret society that wants revenge on the Jedi for some reason.

In any case, Joruus C’boath sort of represents the Dark Side as viewed by Timothy Zahn. It’s crazy, self-destructive, and powerful. I feel kind of bad for Darth Vader and the Emperor because both get lumped in with incompetent comic book villains like Cobra Commander and Serpentor when both were actually quite intelligent in the films. Joruus C’Boath just exists to give us an unambiguously evil nutter for the audience to hate.

The mood of the novel is quite effective, basically grounding us in the Star Wars universe in a way that few others have tried to do. Everything seems to be “normal” for the galaxy. There’s no crazy weirdos with super-powers running around (except Luke). There’s no comic book supervillains building armies of robots to conquer the galaxy. The biggest problem facing the New Republic is getting the economy running again.

It makes Thrawn all the more ominous before the Expanded Universe filled in the timeline gaps to make it a never-ending series of warlords up until this book. Timothy Zahn treats it like the Emperor died and the Senate reformed the next day, inviting the Rebellion to take over. In a way, I almost prefer it because it would make a lot more sense for a large number of Imperials to defect and serve the new regime than treat it like the Rebellion had to fight every step of the way to the capital.

Finally, the novel is extremely well-paced. The book starts very slowly with Thrawn’s introduction and him smashing a bunch of faceless New Republic mooks. It then builds up, our villains slowly assembling their arsenal for their big strike. The end is pure Star Wars, consisting of a ridiculous daring plan meant to decapitate the antagonists in one blow. The only difference is that it’s Thrawn attempting it as opposed to the heroes. I love this book series, always have and always will.

The Books that Made Me: Dragonsong by Anne McCaffrey

The Books That Made Me – Guards! Guards! by Terry Pratchett