What happens when a boy mathematical genius with a computer-like memory find himself the target of unknown murderers? Like anyone else, he runs! But Ronnie Cleveland can count the people he trusts on one finger. And that one, a strange girl named Ana Maria Rosalita, has more than enough troubles of her own.

In my younger days, I believed authors were fabulous, otherworldly creatures. How else could I explain the way they 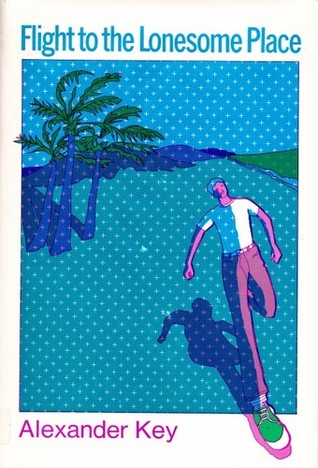 brought entire worlds to life on the pages of the books I read? In my nine long years of life, I’d never met one in the flesh, so it made sense to me that such exceptional people lived in glittering towers far away from the rest of us, typing their lovely words and sending their pages out on the wings of doves, all without the distraction of making their beds or finishing math homework.

I was already familiar with Alexander Key through his wonderful book Escape To Witch Mountain, so when I found Flight To The Lonesome Place in the library, I was beside myself. Little did I know I was taking my first steps into the world of speculative fiction that would later define so much of what I do. I rushed home to start reading, and was quickly engrossed in the exploits of Ronnie, a boy more brilliant than his age would suggest and the target of a mysterious organization who wanted to use him for their own nefarious purposes. He found allies in a band of odd misfits like himself, led by a headstrong girl named Ana Maria Rosalita and together, they worked to reach safety in the Lonesome Place. I read and reread that book, because I seemed to find something new every time. But no matter how often I dove into Ronnie’s story, one answer eluded me – the nature of Marlowe.

Marlowe was one of Ana Maria Rosalita’s friends, and he appeared as a disembodied voice. His corporeal form was never described. Ana Maria Rosalita claimed to know what he looked like, but she refused to say. I needed to know what he looked like. At first I thought there had to be a clue in the book. Reading the story over and over wasn’t helping, and I began to torment my parents with my musings about it. In desperation, my mother suggested I write to the author and ask.

I was stunned. I’d never even considered that solution. Remember, authors, to me, were tucked away on some magic mountain, impossible for ordinary humans to speak to. Surely a letter from a mere child would never be important enough for their eyes, yes? My ever-wise mother (who was ready to scream if I asked about Marlowe even once more) suggested I send it to the publisher, and maybe someone there might help.

Some weeks later, an envelope addressed to me arrived in the mailbox. Not only had the author seen my letter, he’d actually responded. At last, I was going to know the truth about Marlowe! It was a pleasant letter, but at the end, he said, “I’m not going to tell you about Marlowe. I’m sure in time you can work it out for yourself.”

Decades have passed since that day. For a while I was angry with Key. How could he leave me in such confusion? Why not just tell me the answer? It was only when I began writing my own books that I finally understood why he answered as he did. Key wasn’t being selfish at all. Authors are not magical beings who hide in glittering towers and weave tales out of sunbeams. They’re people with stories in their heads that they have to write them down and share. We know what we need to make our stories work, but there’s always something new to learn, if the character will reveal it.

I’m now near the age Key was when I sent my letter to him, and a member of that industry I believed was magic once upon a time. Every so often I run into a problem with one of my characters, something about them that I just don’t know. And when that happens, I think about Marlowe, and my letter, and I keep typing. Because like Mr Key told me, I have to work it out for myself.

Misty Massey is the author of the Mad Kestrel series of rollicking fantasy adventures on the high seas, and her latest book, Kestrel's Dance, is available now on Amazon and Barnes&Noble. She is an editor for several small presses, and an instructor for the Speculative Fiction Academy. When she’s not writing or editing, Misty appears on the Authors & Dragons podcast sister show, Calamity Janes, as the cheerful, sundrenched cleric, Malibu. She’s a sucker for ginger snaps, African coffee, and anything sparkly. Find Her Here: https://www.authorsanddragons.com/ Facebook - https://www.facebook.com/misty.massey.3 Twitter - https://twitter.com/MistyMassey TikTok - https://www.tiktok.com/@mistymassey9