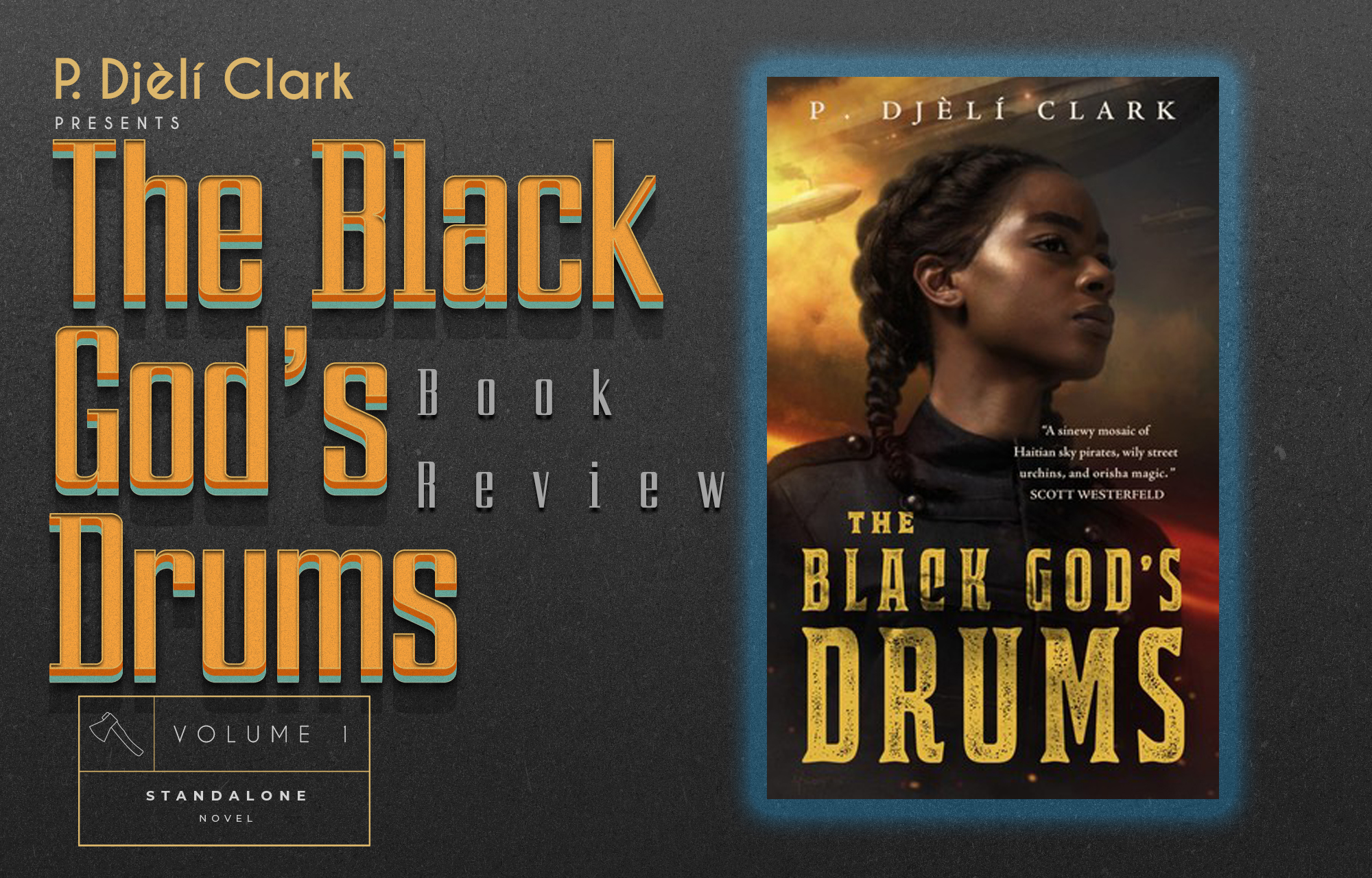 “Twas when they let a cannon fly,

then up went rockets in the sky,

Huzza! For Jackson was the cry”

“Creeper, a scrappy young teen, is done living on the streets of New Orleans. Instead, she wants to soar, and her sights are set on securing passage aboard the smuggler airship Midnight Robber. Her ticket: earning Captain Ann-Marie’s trust using a secret about a kidnapped Haitian scientist and a mysterious weapon he calls The Black God’s Drums.

But Creeper keeps another secret close to heart–Oya, the African orisha of the wind and storms, who speaks inside her head and grants her divine powers. And Oya has her own priorities concerning Creeper and Ann-Marie…”

I have been to New Orleans, once. And even in my limited understanding of New Orleans, I can imagine how difficult it would be to get down on paper. Not only does P. Djèlí Clark get it on paper, but he also evokes the “spirit of the place.” He understands what makes New Orleans hum. Clark understands the smells, and he gets the people. He gets what it feels like to walk the cobblestone streets and hear the music of Mardi Gras. Any reader can read this story and smell beignets, moss, and hear the deep thrumming of drums in their bones. It is no small feat.

The Black Gods Drums is an immersive tale, a steamboat-esque alternative history. An Eloquently written, and researched, story set in confederate era New Orleans post Civil War Stalemate. Clark took legends and folklore from Haiti, the Caribbean, and Africa and paired them with the history of the Haitian Slave Rebellion of 1794. In reality, the rebellion helped create only Haiti, a state free from slavery, and ruled by non-whites and former captives. Yet, in this story, the rebellion helped free Haiti as well as most of the Caribbean and created a state known as The Free Isles. Thus a great stalemate was born between the Free Isles and the slave-owning south. A stalemate based upon a mysterious weapon, previously used once against the French fleet. A weapon that is so powerful that to use it again, it would destroy everything.

Against the backdrop of history, both real and imagined lay New Orleans and our protagonist Creeper. Creeper is a 13-year-old street kid gifted or cursed by the goddess Oya. She makes her living stealing and doing what is necessary to survive. Even though Creeper is a thief, there a strong moral current that flows through her. Given different circumstances, you know that Creeper wouldn’t steal. There is no great thrill to stealing save for prolonging her life a day at a time. Oya, the Yoruba goddess of winds, lightning, and violent storms, death, and rebirth. She was brought to New Orleans in the hearts of slaves. Part of Oya has settled inside of Creeper, sending her visions and protecting her on occasion.

Creeper wants to escape her circumstance. After a chance meeting with a Cajun smuggler and overhearing some useful and important information, Creeper has a chance to leave. What follows is an exciting array of characters. Specifically in the form of Captain Ann-Marie of the airship Midnight Robber. The Captain has secrets of her own and that could involve Creeper. The story has exciting plot elements and a gorgeous retelling of history from that era.

If you like stories that involve nuns, smuggling, mysticism, and saving the world. All set against New Orleans, this is the story for you. It is gorgeously and atmospherically written and I cannot wait to read whatever else Clark writes.

“Fighting it has to be like trying to push back a flood. In my head, Oya laughs. You can run from those old Afrikin goddesses. But they find you when they ready.”