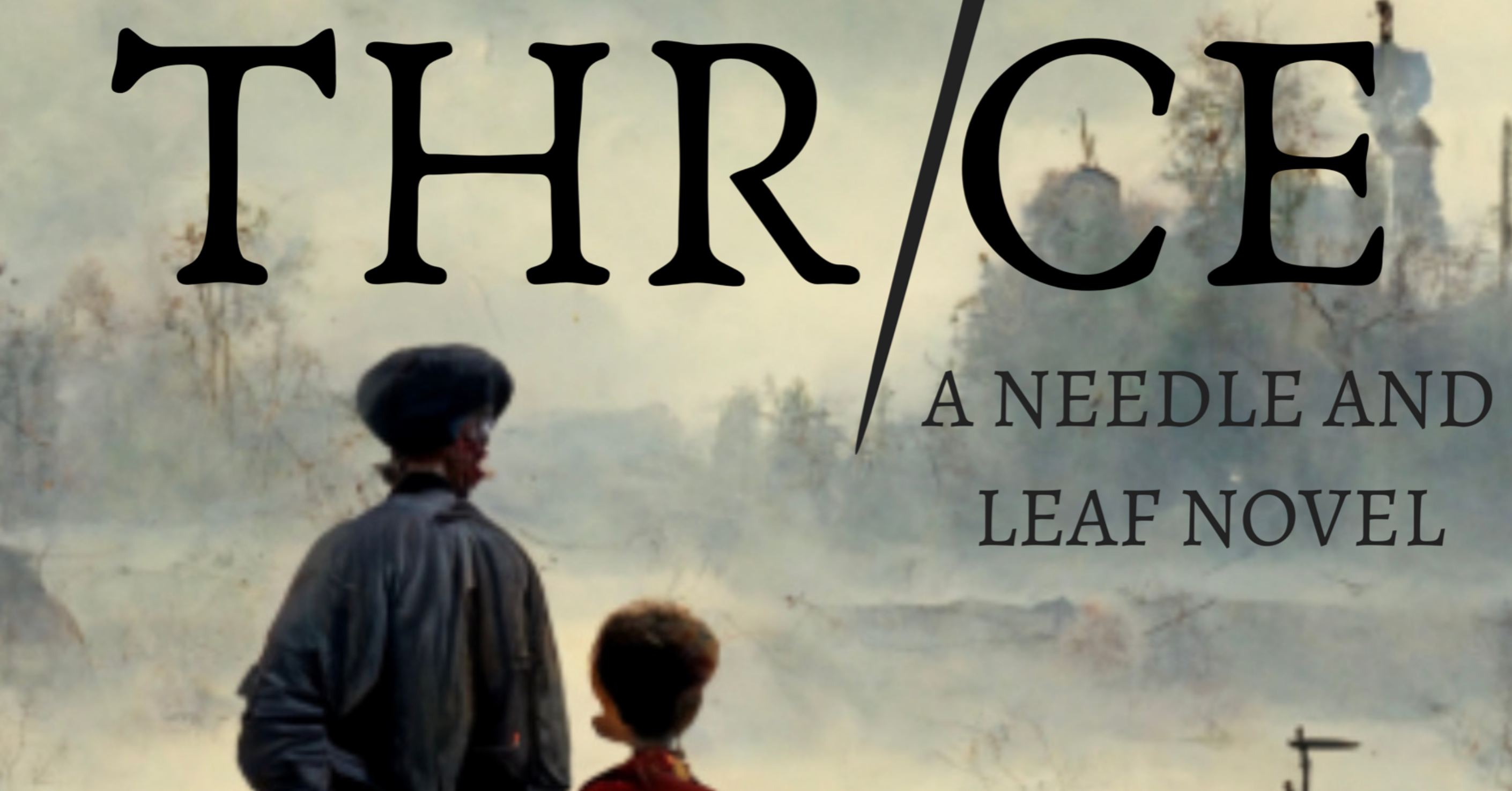 This small-scale adventure featuring a needlemaker and his four-year-old charge charmed me from the first pages and never let me go.

Dan: Honestly, I didn’t really know what I was getting into with Thrice, but I started reading and just never stopped. This small-scale adventure featuring a needlemaker and his four-year-old charge charmed me from the first pages and never let me go. I think fantasy needs more books with personal rather than world-level conflicts, and this book absolutely delivered on that front.

Whitney: I completely agree with your last statement. Small, personal conflicts are underrepresented in fantasy which is a shame because that’s where true humanity resides in even the grandest of epic adventures.

Dan: The story begins with the main character, Jovan, beating the tar out of someone and being shackled and taken away for judgment. Jovan has been in trouble before, we soon learn, and people are already looking for him. He makes his escape with a boy named Leaf, who is like a son to him, though Jovan is not his biological father. They spend the rest of the book fleeing from one trouble or another while Leaf’s innate magical ability is revealed one encounter at a time.

Whitney: Yes! The joys of found family love and Meredith’s subtle, organic way of introducing Leaf’s magic were beautifully wrought. I appreciate not being clobbered over the head with vast and unwieldy talents. Leaf’s magic is as pure and innocent as you’d expect a four-year-old to be.

Dan: The plot itself is rather unremarkable, even repetitive at times, as they encounter one shady character after another, always second-guessing each one’s intentions, for good reason. No one is quite what they seem to be, and many have checkered pasts, but with Jovan’s grit and Leaf’s magic, as well as the help of not a few mysterious and morally gray characters, they muddle their way through from one place to another, always fleeing, always on the verge of being caught. And when they were caught, they managed to escape, again with the help of mysterious strangers.

But even as I found myself wishing for more from the plot, I couldn’t help being invested in the characters. I am a sucker for a gritty fighter who knows how to use his environment as a weapon, and Jovan’s creative, gutsy fighting style was a joy to read. He’s no saint, as the flashes we see of his past show, but whenever he errs, it’s through trying to do good, defending the innocent and the downtrodden and such. And he’s not a proper fighter, trained with swords and what-not. He’s a needlemaker, and a good one at that. And he has so much heart and so little fear. Even as he flees his pursuers, he heads straight toward the Big Bad, and his plan is—get this—to talk to him and convince him not to kill him and take the boy. This is the hero we need in our fantasy books.

Whitney: Ahh…if only more people would opt to discuss differences instead of attacking…but I digress. Jovan’s decision to confront Big Bad head on instead of counterattacking was a brilliant move and allowed for an interesting look at what makes bad guys bad.

Dan: Leaf is a charming kid, and I don’t say this lightly, as I often hate the portrayals of children in media. They too often serve a saccharin role, doling out cuteness and innocence in sickening doses. Leaf is a smart, thoughtful kid, doing his best, but he’s just a kid, and he screws up sometimes. He spends pages playing with sticks as if they’re swords, he makes little jokes, and he clings to—and protects—Jovan like a father. He’s described as wise beyond his years, and there may be spoilery reasons for that, but the author never lets us lose sight of him as a real, living, breathing child in difficult circumstances. Kudos to the author for making me like a child character, which is no easy feat. Everyone in the book is after Leaf, and the reveal as to why is a satisfying one.

Whitney: Oof. Yesss…without being spoilery, the REAL Big Bad reveal is immensely satisfying and to be honest, quite sad. You’re absolutely right in your assessment of children in fiction. Too often they are simple shells of wasted potential. Leaf is different. As the parent of a one-upon-a-time little boy, the pages of stick swords and imagined heroism rang true to childhood fantasy, and I appreciate Meredith for that.

Dan: Though I loved the characters, it’s the writing that sealed the deal for me and made this book stand out from the crowd. The descriptions are vivid and creative without being overly florid. It helped turn this otherwise typical medievalesque fantasy world into a place I could believe in. Some of my favorite moments were the descriptions of these little towns and fortresses they traveled through, like this one:

“The motte rose and the road to the main gate with it, circling to the right, though they turned in the opposite direction, following the outer wall around to where the stone bailey sat sagging on the hill like a large man stuck in his chair.”

“The small village of Stoneweks huddled against the quarry. The main street straddled the slag stream that none dared gather water from. Where the quarry had been bitten back becoming flat ground, new buildings had been started.”

Whitney: It was the small interactions which got me. Like this:

“Leaf yawned as he pulled on his small boots. Jovan had to correct him to put them on the right feet, and then turned the shirt Leaf had pulled on backward.”

“Just as he closed his eyes, Leaf leapt out into the water with a splash that drenched Jovan’s head. Jovan spluttered, and then laughed as Leaf looked up, standing chest deep in the pool.”

The genuineness is just spot on.

Dan: The writing is strong and beguiling without drawing unnecessary attention to itself, which is a rare feat. If this had been an epic fantasy story, we might have become lost in endless descriptions, but Meredith gives us just enough, which is a refreshing change in a genre that sometimes gives us way too much.

My main takeaway is that I loved the characters and the writing, even when the plot felt a bit thin or repetitive at times. There’s something magical about the relationship between Jovan and Leaf, the way they are described, the way they come to life on the page, that makes Thrice an #SPFBO8 semifinalist, and the author one to watch.

Whitney: I happily second this nomination. Or should I say I “THRICE” it?

Buy from Amazon
Add it on Goodreads