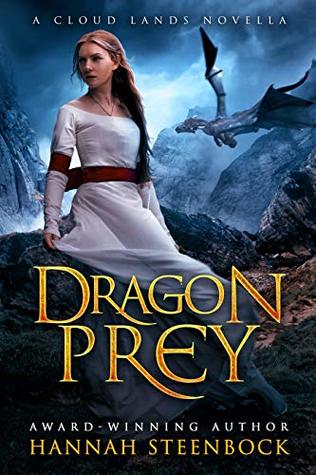 By Luke WinchOctober 12, 2022No Comments

Set in the prehistory of the Cloud Lands world, Dragon Prey, tells the tale of how humans and dragons encountered each other for the first time. Clans of humans and their livestock are prey to ferocious firebeasts that plague the land. Life is hard and the attacks seem to be escalating. One clan, however, has a healer called Sidren, who has the unique ability to sense the emotions of dragons, and this presents a unique opportunity during one tragedy. To communicate with one of the beasts. What follows is the birth of a relationship that shall forever change the human, and dragon’s, worlds.

There was a time when I would usually avoid novellas as I find it difficult to feel immersed in the world or feel that the characters don’t have enough pages to develop enough for me. But in recent years I have felt differently about them, particularly in terms of a novella being an entry point into an author’s creation. So, I chose to read Dragon Prey as one of my SPFBO entries. After finishing it, I am conflicted by my own thoughts about the book.

Hannah Steenbock has created a fascinating world, a prehistory to her other novels set in the Cloud Lands world, as I understand it. The book can be ready independently of that series as a standalone but can also treated as a prequel novel. I simultaneously found this an advantage reading this in isolation of the series as a SPFBO entry, but also wondered if I would have got more out of this story, knowing the events and world from her other novels. It presented an interesting thought process as I read this novella.

Our main protagonist, Sidren, a healer, who has a physical disability, was a wonderfully fleshed out and well written character. She came across as compassionate, intelligent, and mature and was not defined by her disability, but her motivation to save her people. I really enjoyed getting to know her. The other human character I really liked was Mynzir, who becomes an important ally to Sidren as a division fractures the clan when she starts to communicate with a dragon. I did find that the other human characters weren’t as well fleshed out, such as Rella, our human antagonist. I did feel she was rather one dimensional.

Hannah’s prose is fluid and easy to read, her action scenes kinetic and exciting, you can really sense the weight and speed of the dragons, particularly in the ariel scenes. My only personal criticism is that I found the characters to be a little over earnest at times. There is lots of hugging dragon’s noses and frequent exchanges of affection, that was just a little too much for me. Many others will really enjoy this aspect, but, for me, took me out of the situation at several points.

I will definitely explore the Cloud Lands through Hannah’s other books because of reading Dragon Prey, but this novella unfortunately will be a cut.

Luke Winch is a book blogger and podcaster. You can find his reviews and podcast links at lukewinch.com