A cry of pain, hard and desperate, tore through Carthage City one night … 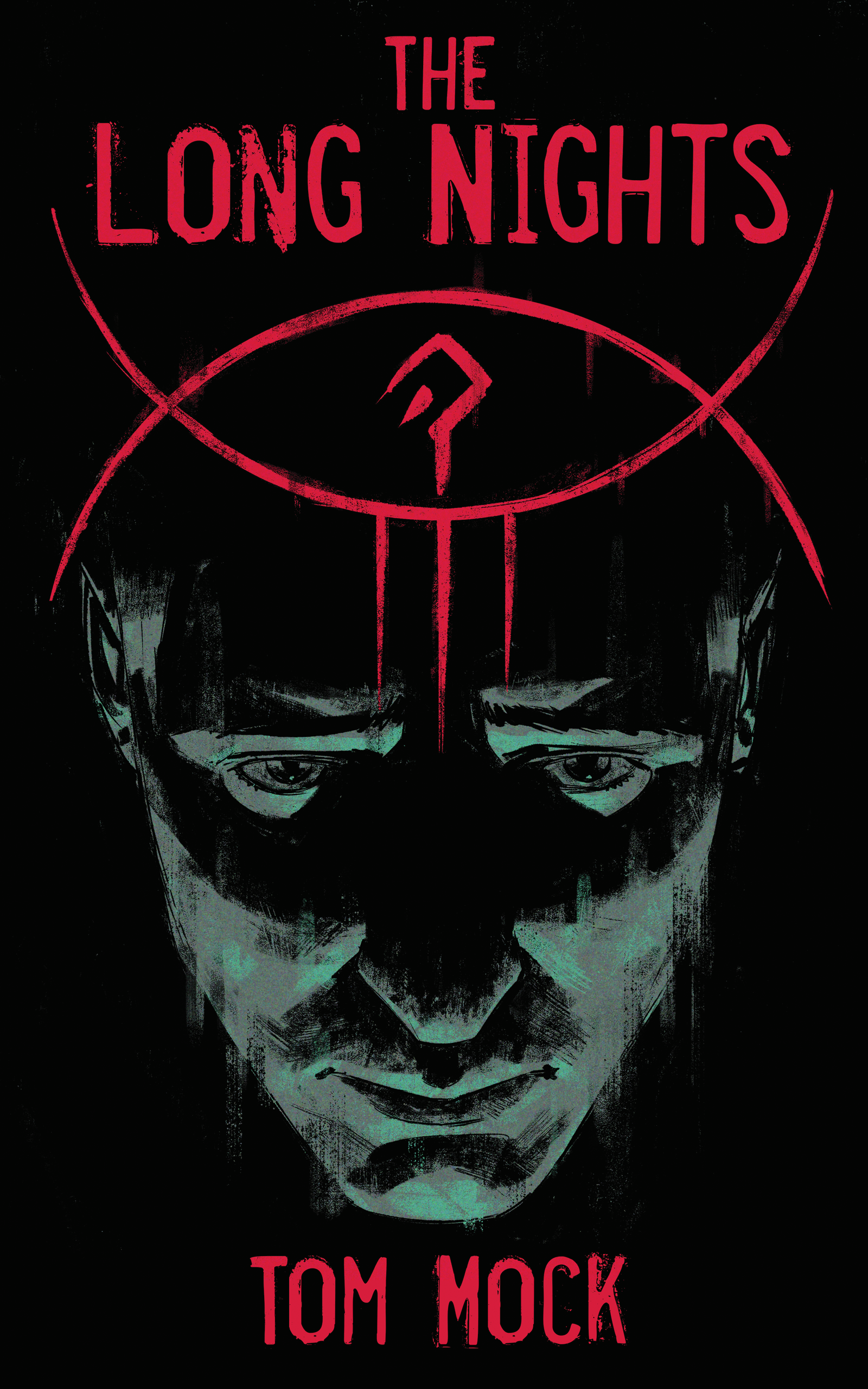 Carthage City is the real protagonist of The Long Nights. Like many a noir before it, you can feel its presence oozing through every description, every block of dialogue and text. It’s a rain-drenched city filled with all the blues bars you can shake a stick at.

For me, these scenes were the real highlight of the story. Mock has a deft hand at dialogue and infusing these places with the right sensibilities. Blues musicians, fancy art gallery shindigs, discussions at bars well after hours, all felt like they popped right off the page. On top of his work as a psychic investigator hunting the supernatural, he’s an artist, and when Mock brings that sensibility into play, his writing excels.

Joe Kellerman works as a great protagonist because he’s so underpowered. This isn’t Sandman Slim or the Dresden Files, where sure there are monsters but the hero can take them on directly. He’s got some minor psychic powers that are both help and hindrance.

As a matter of personal taste, when the characters already know and have studied the monsters they’re hunting, a key element of horror fades away. (Cosmic horror gets around this, but while I enjoy cosmic horror, I find it more interesting than scary.) Luckily, he did have plenty of strange ambiguity and mental landscapes that helped offset that.

Overall, I really enjoyed The Long Nights, a noir tinged with the macabre.

Buy from Amazon
I have provided an honest review of this book below for purposes of the Self-Published Fantasy Blog-Off (SPFBO) Number 8 competition in which this book is entered, and assigned to Before We Go Blog for judging.
For my next SPFBO read, I dove into some dark urban, paranormal horror-fantasy, in “The Long Nights” by Tom Mock. This book earned a 2021 Indies Today Awards: Runner-up in Horror. The accolade gave me some hope that it would be a good book. Indeed, it very much was.
Mock brings us a visceral, heartfelt and emotional vampire tale, centred around a talented yet flawed and conflicted protagonist, Joe Kellerman, who is surrounded by malevolence, death, and personal struggles.
Joe is something of a physcic, a supernatural private detective, and has the ability to transport himself into the mind of victims and murderers. These unique skills make him invaluable to his boss, Marv. Because there’s a really, really nasty vampire stalking the streets of Carthage City, dubbed “The Nightstalker”.
This deadly nemesis has left a bloody trail of gruesomely dismembered bodies, and terror in his wake. While coping with a dependence on pills and hard booze, the mental toll of his gifts, and perhaps worst of all the recent breakup with his girlfriend Cathy, Joe must find a way to retain his sanity, and stay alive, as he tracks a killer into not only the dark heart of Cartage City, but of his own mind.
The odd thing is, the vampire should not be a threat. Why?
Because he’s already dead, decapitated, with his head sitting in Marv’s basement…
The characters in the book were excellent, beginning with the tortured main character, Joe. Much of the horror features of the book actually take place within Joe’s mind – he’s a pretty messed up dude (you would be too, in his shoes). Joe’s sanity is endangered, as well as his very life, as he plays a high stakes tag game with the dangerous dead vampire.
Joe is definitely flawed, vulnerable, but with some basic decency that will make the reader root for him, and very much worry if he’s going to make it out alive. Because Joe is matching wits with an undead foe that seems to be toying with him, just waiting for his opportunity to ruin Joe in both body and mind, forever.
I loved the secondary characters, who are even more shady, oftentimes, than Joe. Janis, Marv, and Medic & the rest are all often equivocal in terms of their motivations, and the reader will wonder for most of the book, and beyond, what they are really up to. Nevertheless, they are fascinating, and add a real dash of mystery and panache to the novel.
The landscape depicted by Mock is gritty, gloomy, exhilarating, and oftentimes fuzzy, as the protagonist engages in a macabre ceremony that brings him right into the very consciousness of his enemy, the predatory vampire, Adrian.
Sometimes it will be difficult for the reader to discern what is hallucinatory, and what is actually real, as Mock takes us on a journey where Joe’s grasp on reality is nebulous, at best. There is an ambiguity, to what is happening, at times, but all becomes more clear as the novel builds towards a conclusion that is not entirely satisfying, but certainly incredibly interesting.

In terms of actual worldbuilding, Carthage city itself, the setting of the novel, is bleak, rainy, depressing, and filled with the type of terror that lurks in the vampire’s mind, that Joe becomes all too familiar with. There are plenty of bleakness, dark alleys where murder, mayhem, and mutilated corpses abound, and it’s just the kind of place where occult practices give rise to bad things that emerge from the shadows, and horrify people before ripping them apart.
The law enforcement or investigators are always one step behind, and are forced to resort to desperate and questionable experimental methods, the bad guys always have the upper hand, and everyone else seems helplessly caught in the middle. That crime noir flavour, combined with the paranormal fantasy aspects of the book, were well done.
Mock’s prose is great: very smooth, succinct, yet evocative, with brilliant little gems of quotable lines that will linger with the reader, some witty dialogue, the right touch of mystery and creepiness in the right places, and some beautifully written, yet simply described moments that will tug at your heartstrings.
“I thought of what a relief it would be to lay my head in her lap and feel her hands move over my face, to hear her humming and know three was still some measure of kindness in the world. Then I remembered where things stood between us.”
Mock allows the reader to experience the paralyzing fear of the victims, the maliciousness of the antagonist, and Joe’s personal demons, through crafty writing that produces, overall, a very eerie and poignant effect.
The pacing is quite tight and agile, and for all its layering and complexity (and delicious misdirection), this is a breezy book that reads like a crime fiction / murder-mystery thriller, and at around 300 pages, 3 days reading was not a taxing clip at all to absorb the whole novel.
Mock tackles themes such as addiction, loss, mental illness, evil, relationship issues, and dealing with enormous responsibility while maintaining one’s moral compass, with aplomb. This is a dark, disturbing, and sometimes a bit psychedelic book that explores some terrifying things. But it is very well-written, and I found it hard to put down.
Any good horror novel exploits our fears, mingling commonplace or familiar settings or concepts, with the appalling or abnormal, and getting into our psyche, at what really scares us, bringing those fears to life. A healthy dose of intrigue, gore and blood always spices things up even more in a horror book.
Every really good fantasy novel I’ve ever read has an interesting blend of magic, worldbuilding, complex but believable characters, and engrossing themes.
“The Long Nights” has all these elements, and that makes for great horror-fantasy.
I think this book is criminally under-reviewed with only nine ratings and five reviews on Goodreads, this for a 2021 Indies Today Awards: Runner-up in Horror.  Some more love here for “The Long Nights” is definitely deserved, and overdue, in my estimation.
For fans of Ryan Howse, Clayton Snyder, Micheal Fletcher, this is your kind of book, and it’s a good one.
I endorse “The Long Nights” to move forward to the semi-finals round in Before We Go Blog for SPFBO 8.
If I consider a book a five-star read, those are the books I will be recommending to be put forward for advancement to either a quarter-final, semi-final, or final round of SPFBO within Before We Go Blog.
For “The Long Nights,”  my score is 4.50, rounded up to 5 out of 5 stars.