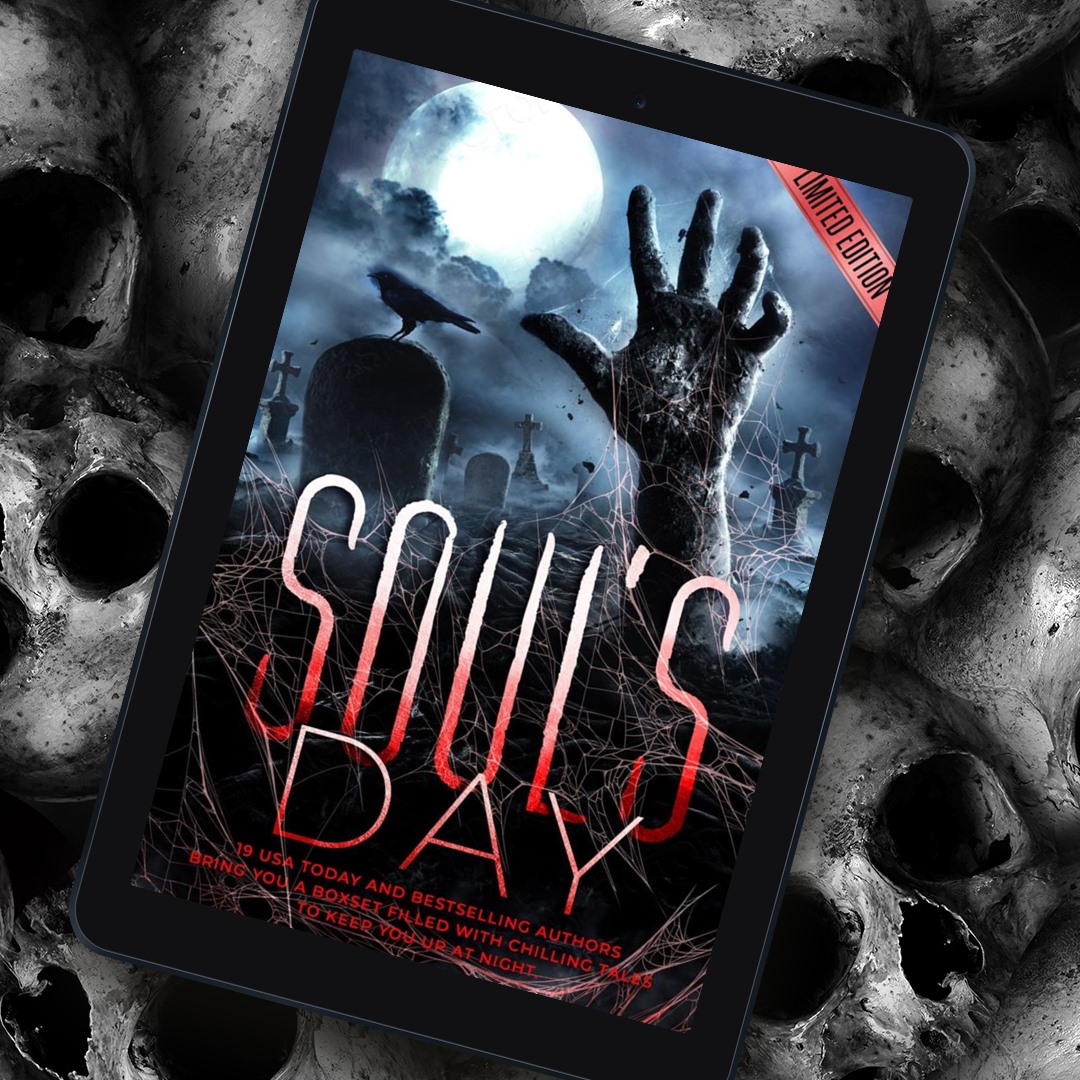 By Beth TablerOctober 24, 2020No Comments

Old Hallows Eve, when things go bump in the night,
Children come to play, and the witches provide the fright.
For 19 authors, USA Today and international bestselling,
The Halloween tales become more than this foretelling.
In the Soul’s Day Boxset, a mansion feeds on souls,
A gargoyle captures them, and a demon dungeon master makes the calls,
Campers gets picked off one by one,
The Karnaval’s corn dogs are less than fun,
Ghosts lurking around every bend,
‘I do’ at the wedding is the very end.
A boxset of chills and thrills to keep you up at night,
One-click pre-order to snap your copy filled with fright.
On old Hallow’s eve when creatures come to play, With this spine chilling pages, it’s where you’ll want to stay.

A boxset filled with all kinds of weird, the unexplained, terror and survival from unearthly beings.

Excerpt from Azaaa Davis's Story Featured in the Book!

“Do you want to keep your job?”

With nothing appropriate to say, I nodded.

Of course I wanted to keep my tedious, entry-level clerical job that somehow paid less than my last one. I loved waking up at six in the morning to ensure the office opened by eight. I loved working for orthopedic surgeons striving to be the best ortho clinic in town. Who wouldn’t want to have not one but three self-centered, competitive, and arrogant bosses?

I exercised and put on makeup each workday because I was the face of OrthoCity. I dressed like I made half as much as the doctor that signed my paycheck. When the doctors squeezed in more consults, I worked longer hours. When the doctors surpassed their allotted time in the operating room at the hospital, resulting in their office visits needing to be rescheduled without notice, I worked tirelessly to make it happen smoothly. When not one but two doctors impulsively took weeks off for vacation, leaving me with only one doctor and too many entitled patients, I continued to work with a smile on my face. I was here, working, consistently and reliably.

“If you want to keep your job, I need you to show up on time and open the damn clinic!” my boss said in that booming voice of his that I would never grow fond of.

A heavy hand gripping a blue monogrammed pen waved a little too close to my face. I leaned back and bit the inside of my cheek to keep my smile in place. As if I were staring at still water, my superficial smile reflected back as a deep frown on Dr. Eames’s freckled face.

“Mrs. Reid waited outside for an hour! One long, unacceptable hour before you showed up disheveled and unfocused. Long enough for her one-star review to be published on My Doctor and Google Reviews. So don’t sit there nodding like I’m the scary bad guy,” he said while standing over his desk. “Just do your job before I replace you.”

Still lacking anything appropriate to say, I nodded.

He glared through his black-rimmed glasses. My boss led our small business well, but he annoyed me to no end. He spoke loudly even when he wasn’t yelling, and he wore prints and patterns that made me squint.

The fact that he wore a blue, fitted, long-sleeved shirt with a Star Trek emblem pin on the right side of his chest today might have been understated, but the scolding he so readily dished out did nothing to make him more likable. Apparently, he required a verbal response to end this irritating meeting.

“Yes, sir,” I said through gritted teeth and with my eyes averted.

“Consider this your second strike.”

Dr. Eames simultaneously opened a thin patient file, tapped his mouse to wake up his computer, and dismissed me from his presence.

I stood and adjusted the lion ears headband to make it pinch less. My thick, curly hair worked well with my costume. I pulled on the plush lion tail secured to my scrub pants to reshape it from sitting for the last ten minutes. Knowing Dr. Eames would be staring at a well-shaped ass he could never tap, I walked out of my boss’s office like I had just gotten promoted.

You Can Find More Information on Azaaa’s Site