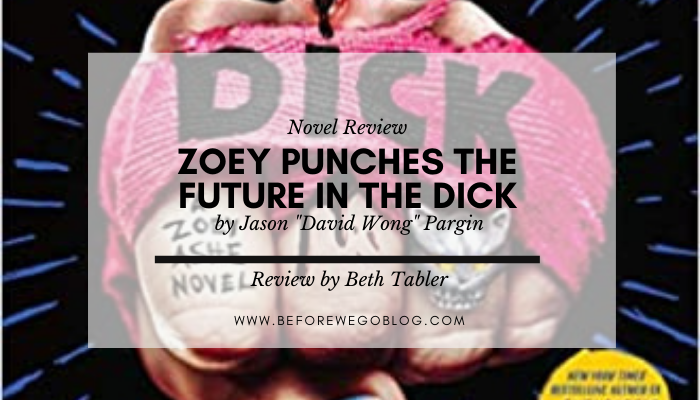 Don’t F*ck With Her Cat 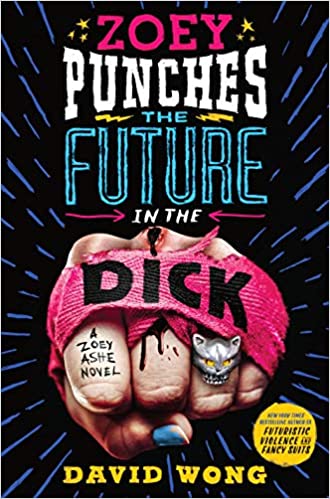 Zoey Punches the Future in the Dick

“Will, calm as wind chimes, said, “Wu, if you hit Zoey two inches below her rib cage and one inch to the right of her spinal column, you’ll punch a hole through her abdomen that she’ll likely survive. Set the round to detonate about six inches later, inside Mr. Tilley’s torso. It will blow him in half, implants or not.”―

David Wong, Zoey Punches the Future in the Dick

Nightmarish villains with superhuman enhancements. An all-seeing social network that tracks your every move. Mysterious, smooth-talking power players who lurk behind the scenes. A young woman suddenly in charge of the most decadent city in the world–and her very smelly cat.

Zoey Ashe is like a fish so far out of water that it has achieved orbit. She finds herself struggling to establish rule over a sprawling empire while Tabula Ra$a’s rogue’s gallery of larger-than-life crime bosses and corrupt plutocrats smell weakness. Tensions brew across the city.

A steamer trunk-sized box arrives at Zoey’s door, and she and her bodyguard Wu are shocked to find that it contains a disemboweled corpse, and even more shocked when that corpse, controlled by an unknown party, rises from the box and goes on a rampage through the house. After being subdued, it speaks in an electronic voice, accusing Zoey of being its murderer. Soon, it makes the same claim to the public at large, along with the promise of a cash reward for proof that Zoey and the Suits are behind the crime.

Now Zoey is having doubts of her own: Is she 100% sure that someone on her team didn’t do this? She also doesn’t even have a complete list of what businesses she owns, or what exact laws her organization is still breaking. So what does she really know? 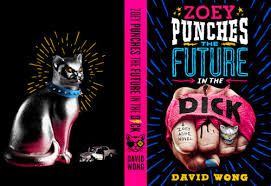 Zoey Punches the Future in the Dick by author Jason “David Wong” Pargin is the second installment in the Zoey Ashe series following 2016’s Futuristic Violence and Fancy Suits. Just as it did in Futuristic Violence, the newest Zoey book is a hilarious blend of science fiction storytelling and the absurd. Once again, the story takes place in Tabula Ra$a, Utah. A city designed around the wealthy, the indulgent, and lawlessness.

In the previous installment of this series, Zoey had inherited her father’s multi-billion-dollar empire built on his mob-like tendencies and the whimsical desires of a man with too much money and not enough scruples. Zoey, who grew up very poor with a single mother, has to morally navigate the needs of existing in this ridiculous world with her moral compass. All while surviving what is thrown at her from exploding humans with superhero powers to mobs of online rage-filled people passing rumors around about her being a cannibal.

This particular entry into the series has Zoey being digitally harassed and attacked. The masses of online trolls of Tabula Ro$a accuse Zoey of being a cannibal and a power-hungry despot. They threaten her home and general well being. They attack her online, make up wild stories and accusations, and generally make her life a living hell. To complicate things, a rival security company is throwing proverbial gasoline on the fire.

Did they send the steamer trunk with a dead body that jumped up and started chasing everyone around the mansion, shouting about Zoey being a cannibal? Or was it something more sinister?

This story again demonstrates the wit and imagination that Wong has shown in all of his books. Both the Zoey series and John Dies at the End employ the absurd and the gonzo with sympathetic characters and social commentary. While Zoey is a funny book, the characters play off of each other well. There is a lot of funny banter between the Zoey and her team, but there is an undercurrent of sadness under it all. Zoey is isolated. She has no close friends, and the only regular social interaction she has is with her cat. That isolation is making her feel off-kilter and very alone.

Another positive of David’s writing is that he does not shy away from humanity’s uglier problems. For instance, in between the timeline of Futuristic Violence and Fancy Suits and Zoey Punches the Future in the Dick, Zoey ends up having a mental breakdown and needs to enter a mental health facility. It is no wonder she has been through some incredibly traumatic events. Instead of using that kind of thing for comedic fodder, Zoey speaks pretty candidly about it. Likewise, Zoey has small mental breakdowns, nightmares, moments of freak out that normal people experience. It adds realism to Zoey’s character, and it is wonderful seeing an author talking about things like mental health more realistically.

“The victims smelled smoke. They all wanted to get out but they didn’t hear an alarm. The alarm, in that situation, wasn’t there to announce there was a fire—they knew there was a fire. The alarm was there to give them permission to get up and leave. Nobody wanted to be first, the social pressure kept them glued to their seats.

Well, mass violence works the same way. It just takes one person to be the fire alarm, to give everybody permission to go wild. But probably half of the rioters back at the inn couldn’t pick you out of a lineup or even explain what they were angry about. It’s a core of obsessed true believers surrounded by a cloud of fence-sitters looking for a purpose to cling to. Most of those would disperse if the core were to . . . go away.”

Zoey is, fundamentally, a realistic person. She was a coffee barista, has a terrible ex that broke her heart, and worried about keeping the heat on. At her core, Zoey is a morally good person, maybe not all the time, because who is good all the time. But at her heart, she is trying. She cares about people, even people she has never met and wants to make the world a better place. She is also continuously being thrown in bizarre circumstances that are usually beyond her control, and she fakes it till she makes it. Basically holding on to her goodness and humanity as best she can.

This quality of Zoeys, paired with David Wong’s excellent writing and ferocious wit, makes him one of my favorite authors to read. He continuously puts out good work, and if you are a fan of the slightly bizarre with a science-fiction bent to it, his stories and specifically Zoey Punches the Future in the Dick is worth reading. I have a feeling you will love his books.