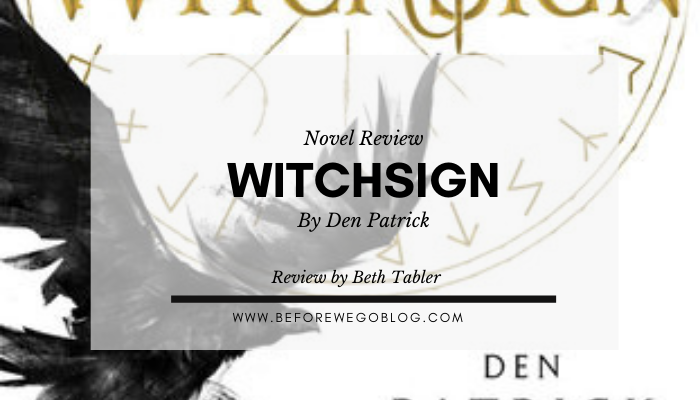 ‘What if Harry Potter was sent to Russian Hogwarts only to find out he was a Muggle?’
―

From celebrated YA author Den Patrick comes WITCHSIGN, the first novel in a fresh and exciting new fantasy trilogy

It has been seventy-five years since the dragons’ rule of fire and arcane magic over Vinkerveld was ended, and the Empire was born. Since, the tyrannical Synod has worked hard to banish all manifestations of the arcane across the lands.

However, children are still born bearing the taint of the arcane, known to all as witchsign. So each year the Emperor sends out his Vigilants across the continent to detect the arcane in these children. Those found tainted are taken, and never seen again. Steiner has always suspected his sister Kjellrunn of bearing witchsign. But when their father’s attempt to protect her from the Invigilation backfires, it is Steiner who is mistakenly taken. However it is not death which awaits Steiner, but an Academy where the children with witchsign learn to master their powers – some at the cost of their lives. Steiner is determined to escape the Academy and protect his sister from this fate.

But powerful enemies await him at every turn, and Steiner finds himself taken on a journey straight into the heart of the Empire’s deepest secrets, which will force him to reconsider everything he has known about witchsign.

Witchsign by Den Patrick is a slow burn of a novel but promises a solid foundation for the Ashen Torment series. Patrick, whose previous stories included the dark fantasy series Erebus Sequence, writes Witchsign as a novel that can be appreciated by adult and YA readers alike.

Their town of Cinderfall is colored in gray shades, whether it be from ash or dirty snow, brother Steiner and sister Kjellrunn have only known the gray their whole lives. Steiner is a fledgling blacksmith apprentice; his goals in life are to take care of his family, especially his eccentric sister Kjellrunn, find a wife to love, and live in as much comfort as he can fight for.

Kjellrunn has always known she was a little bit different. Instead of chasing boys and persuing relationships as some of the other girls in her village, Kjellrunn seeks out the calmness and solemnity of the forest. It brings her quietude, beauty, and color.

A ship arrives, as it does every year, full of the Empire’s Invigilators. Invigilators are servants of the Empire and, specifically, the Emperor that seek out and sense those with Witchsign. A set of power of the elements. Some have the ability for fire, some earth, some wind, and some water. If an Invigilator detects the Witchsign than that child needs to report to the ship the following morning and be taken away permanently.

No one knows what happens to the child. They are just gone.

The Inviligators are rightly feared by parents and children alike. The time of the Invilligators has come, and it is Kjellrunn’s turn to be tested…

The story is told almost entirely from the perspectives of the two kids, Kjellrunn and Steiner. Kjellrunn is left in the village and shunned by the whole community save for her dad and uncle.

Steiner is mistakenly shipped away to an academy/prison that sits on a rocky island surrounded by rough seas called Vladibodgan. The island’s location is a great secret and only know to those of high ranks in the Empire, and ships that bring supplies to the island.

The kids’ lives have taken drastic turns from each other. Steiner must survive his ordeal. He doesn’t have Witchsign, and that is of great embarrassment to the invilligators in charge. Kjellrunn shunning leaves her unable to get food for her family; her family’s smith is also being shunned and told to move to another town. Kjellrunn only wants to survive and help et her brother back at all costs. At the same time, Steiner wants to get off of the island and protect his sister.

I think this parallel of intention between Steiner and Kjellrunn is the heart of the story. Both are desperate to save the other. This desperation fuels the characters desire chapter by chapter. It is an exciting perspective for a reader to watch the scenes unfold and know that they might miss each other if they are successful.

As far as characters go, Steiner and Kjellrunn are pretty standard. At least at this point. Steiner is a sort of angsty teenager but, at his core, has morals and strength. Kjellrunn is also similar, angsty, but where Steiner has a core strength, Kjellrunn has a lot of emotion. I think this part is a means of differentiating her from other characters in the book. She feels a connectedness to the world and nature specifically that is not experienced in other characters. Both characters have moments where they are irritating. Steiner is very much a hothead, and Kjellrunn is a bit flighty. I think that as the story progresses, we will see these two characters mature. Their natures both will be tempered by experience, and they will grow as people.

There are also some great side characters in this book. The book mainly focuses on the siblings; however, we get insight into the side characters and interact with them. I get the impression that their presence in the main character’s life will play a crucial role in future books.

I generally enjoyed Witchsign. Some moments slowed the pace down, and I was looking forward to switching perspectives. I think inevitably when reading Witchsign you will be either Team Steiner or Team Kjellrunn. Both have similar goals, save the other person.

But I found myself on Steiner’s team. I looked forward to the parts that featured him while not being wholly engaged in Kjellrunn’s plight. Maybe that will change in future books, and Kjellrunn will be a character that will have more growth and be more enjoyable for me to read. But as it stands, she seems almost as a side character.

The worldbuilding shines in Witchsign. Patrick expertly creates a unique world. Some elements build on popular mythology in fantasy novels, but generally, the world feels very fresh and inventive. I loved the magic system. The last 20% of the book moved at a lightning pace. The action, coupled with the solid world creation, made it fly page to page. I hope that this pace continues in the next novel, Stormtide, and I am looking forward to seeing what new plot twists Patrick will pull.

I received a copy of this from the publisher in exchange for an open and honest review.