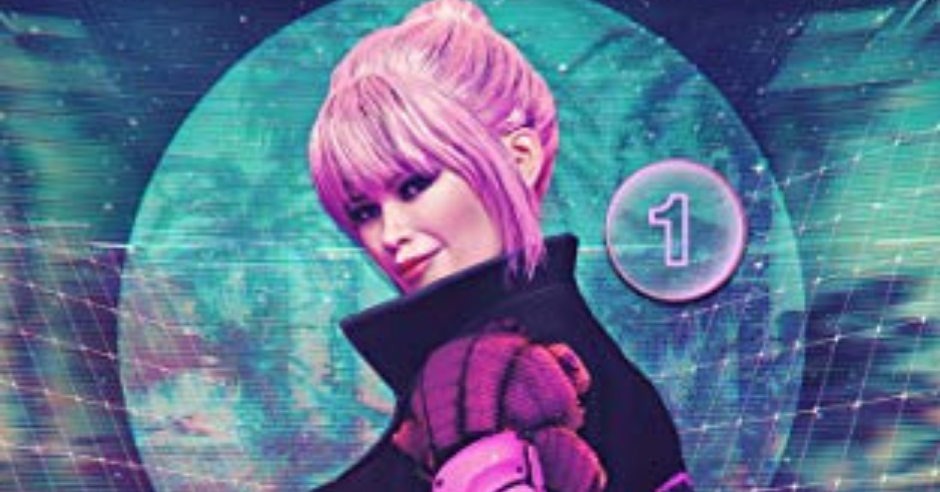 “Strippers, Drugs, and Headless Corpses…
All in a day’s work for Bubbles Marlowe, HoloCity’s only cyborg detective.
?”

TROPICAL PUNCH is the first novel of the BUBBLES IN SPACE books that star Bubbles Marlowe, a recovering alcoholic ex-cop with a cybernetic arm. Bubbles lost her arm when she tried to bring in a drug dealer with knowlege of corruption on the force and ended up blown up for her trouble. Reinventing herself as a private detective, she finds herself neck deep in the same trouble that got her blown up since her former boss is out for her blood.

Tropical Punch opens with Bubbles screwing up her latest assignment to protect a young woman, finding her dead before her arrival. It gets weird when an identical doppleganger shows up minutes later, only for her to be killed as well. Almost killed by the assassin, Bubbles barely makes it back to her office and discovers that she has won a all-expenses paid space cruise. Which is strange because she didn’t enter the contest she’s supposed to have won.

This is an interesting cyberpunk novel and very much not of the mainstream as it is an indie self-published work available on Kindle Unlimited. I always like reading indie books because there’s nothing that feels more appropriate for cyberpunk than a work written outside of mainstream publishing. While lighter and softer than a lot of fiction set in the genre, it is still capable of tackling pretty dark subject matter. It’s more the way it’s all presented that makes it fun rather than depressing.

N.K. Jensen is an author who has created a neon noir world that manages to be gritty, punk, and violent yet not really all that dark. Part of this is due to how undefeatably plucky its heroine is. Bubbles’ situation is absolutely terrible but she somehow manages to bounce from bad to worse without ever losing her pluck. There’s also a great deal of humor in this book as well. My favorite scene being where Bubbles asks if there’s any superpowers or special features of her new cybernetic arm, only to find out its biggest features are that it gives her a month of free aps for all her favorite media.

The cruise ship section of the book is probably the best with Bubbles struggling to fit into the ultra-posh and ridiculously pricey world of high end tourism. As someone who worries about keeping the lights on and not losing her home, she finds the excess on display to be bewildering as the rich truly are their own species in her world. At one point, she meets a semi-sane cosmetics baron who wants to hire her to sabotage the competing product roleout happening on the cruise. Bubbles has no response to the fact he assumes she’s a merc for hire.

The villains are a suitably hatable bunch with grand transhumanist dreams as well as incredibly slimy methods. It’s kind of hilarious that Bubbles has no interest in stopping any of them or desire to solve crimes on her vacation. She’s more interested in the buffet than she is being a hero. However, events conspire that she has to solve the crimes going on or she’s going to be killed by her insane ex-chief, Swain. It adds to the absurdity of the situation that Swain forces Bubbles to fight back as its the only way to survive.

In conclusion, this is a really great novel and a perfect example of modern cyberpunk. Bubbles is a great character, her supporting cast is hilarious, and the villains are boo hiss hateable. It manages to capture the dehumanizing effect of technology while not demonizing it. It is merely the uses that corrupt and greedy put it to use that ruins its value. I am definitely picking up the rest of the series and reading it.