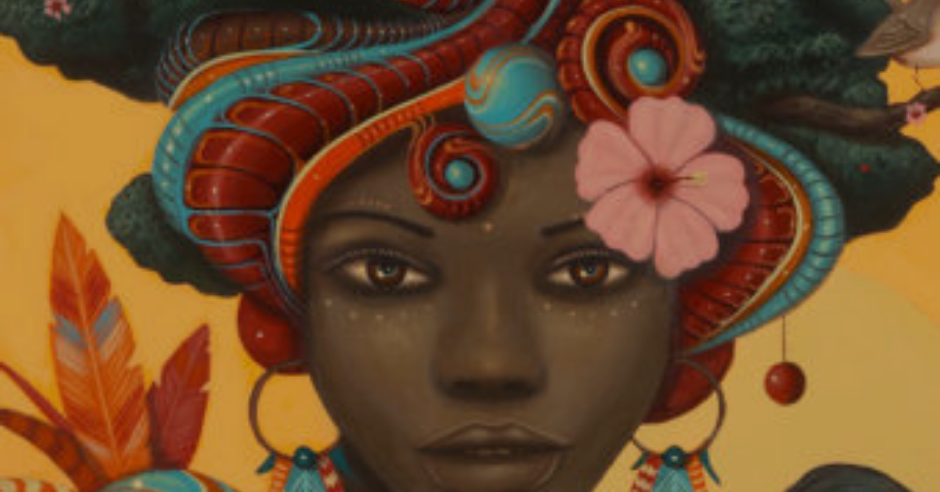 Review – The Sin of America by Catherynne M. Valente

Home » All Reviews » Review – The Sin of America by Catherynne M. Valente

“There’s a woman outside of a town called Sheridan, where the sky comes so near to earth it has to use the crosswalk just like everybody else.” 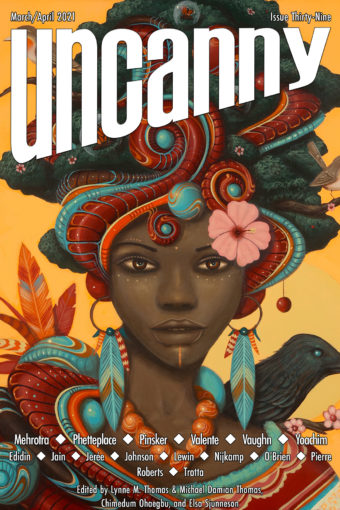 “There’s a woman outside of Sheridan and she is eating the sin of America.”

What is the sin of America?

That is the question of this story, and it was a question I asked myself repeatedly as I had to read it three times before I started to understand. That is not any knock to Cat Valente. Sometimes great things take time to digest, and they have to be chewed thoroughly. Do I know what the sin of America is? Maybe. Maybe I think I do because I am an American and see glimpses of it. Whatever is happening in the story is not straightforward. Because doing something like eating the sin of America is not an easy or simple thing.

All we know is that we are in a “Blue Bison Diner & Souvenir Shoppe under a busted wagon wheel and a pair of wall-mounted commemorative plates. One’s from the moon landing. The other’s from old Barnum Brown discovering the first T-Rex skeleton up at Hell Creek.” There is a woman whose life has been nothing but pain and half-truths and disappointments sitting in a vinyl booth. Her name is Ruby Rose and “she ran away from the Ultimate Butterfly Experience as soon as she could chain one dollar to the next.” She was terrified of the glittery swarms that flitted and alighted after stroking you with their sticky tongues. Some butterflies drink the nectar of flowers, but many will eat anything. Ruby Rose was called upon to eat the sins of America.

You’ve Almost Made It To the Best Day of Your Life! Just 25 Little Ol’ Miles To Go!”―

BY CATHERYNNE M. VALENTE, The Sin of America

Ruby Rose is sitting in this cracked vinyl booth in this no-where diner staring at the menu. They told her that her meal could not be a small one. “Ruby-Rose looks over the menu. She isn’t in the least hungry. But it cannot be a small meal. They told her that when they came for her, and all the delicate endangered emerald swallowtails circled their heads like green rings around terrible planets. It cannot be small and it cannot be short. It takes as long as it takes. You can’t do this thing halfway. We’re counting on you.”

The Waitress who is serving Ruby-Rose is named Emeline. She nervously cracks a pinky and asks Ruby what she wants to start with. Ruby asks for some wine, but they don’t serve soft things like that here. The owner of the diner, Mr. Herbert James Gage, when informed by certified mail that it was going down in his restaurant, picked up some hard alcohol in preparation for the event.

The food starts to come out: a rib-eye steak, peppermint milkshake, and tomato soup. It is grotesque in its amount, and the food keeps coming. Ruby keeps swallowing. It is too much food, it is all too much, it won’t fit inside her, and she can’t hold it. All this was the lottery or the anti-lottery. Astronomical odds that it would be her.

What happens when she is done? “We’ll be happy, they say. We’ll be better. We’ll all be happy forever and everything will be okay.” But will we? Probably until the next person has to come and eat our sins.

The imagery is grotesque, slovenly. The woman, Ruby Rose, has a life of tragic mediocrity. Then as the story progresses and climaxes, Ruby finishes her food and so much more. It ends and begins again. The cycle. Does it mean anything? Does Ruby Rose’s sacrifice mean anything in the grand scheme of things? I don’t know; there will be more sin.

The Sin of American is one of those stories that is difficult to parse; you can read it a dozen times and get more out of the language. It has the ere of dark and too salty, or sticky sweet. It is the idea of fried twinkies and made for tv movies. It has a vague christ mythos, but that has been sanitized, homogenized, and run through a Jerry Springer talk show. It has lost all of its original meaning and become an ugly thing. Someone must suffer. And in this scenario, for all of us to continue to sin and enjoy our lives, Ruby Rose must eat that sin and suffer.

It is a harrowing story that is puzzling and will continue to puzzle me as a reader. But, one thing is for sure. Cat Valente is a hell of a writer.